By Rakesh Kanda and Fran Bilby

The laboratory plays a key role in identifying emerging contaminants

Over the past thirty years, the European Union has introduced a range of legislative measures aimed at improving the quality of the environment. More recently, EC Directives have particularly focussed on the discharge of contaminants into the aquatic environment. The implementation of these directives has delivered significant ecological benefits, but for these to be sustained, investigations into the impact of modern processes and products must continue. The laboratory plays a key role in better understanding these impacts and identifying compounds of detrimental effect to the environment.

The single most significant piece of EU legislation to be introduced in the last ten years is the Water Framework Directive 2000/60/ EC (WFD). The WFD, which came into force in December 2003, further heightened awareness of the potential of our actions to pollute the aquatic environment. The legislation provides a clear framework for the protection, improvement and sustainable use of water across Europe. The directive sets out to:

through the application of various daughter directives. Environmental Quality Standards are classified to assess the state of the water environment using the following system

The Directive outlines a range of analytical requirements that were not previously necessary, particularly for Priority and Priority Hazardous Substances, which will be used to define ‘good chemical status’ of surface water bodies. Priority substances are classified as being harmful and Priority Hazardous Substances extremely harmful to human health and the environment. As a consequence, their discharge must be limited and concentration levels monitored. Monitoring of these substances in the environment is highly dependent on the ability of laboratories to accurately measure chemical contaminants and ecological status. This has led environmental testing laboratories to develop new suites of analysis to support the needs of the water industry.

Over the last eighteen months, Severn Trent Laboratories (STL) Ltd have been leading the way in developing methods to meet changing legislative requirements. These include developing methods for the 33 priority and 8 other substances outlined in the Water Framework Directive. STL are now working on the development of methods for supplementary compounds that are being considered for addition to the list.

STL have developed a leading method for the analysis of landfill leachate and discharges to groundwater. It is predicted that this method will encompass many of the requirements of raw surface water monitoring under the WFD monitoring programme. In addition the reporting values can be used to assess whether a predicted discharge of List 1 substance to ground water is evident and therefore, measure compliance with Groundwater Directive requirements. The Environment Agency have issued the following guidance document Hydrogeological Risk Assessments for Landfills which sets out the typical minimum reporting values for selected List1 substances in clean groundwater.

As more substances go in and out of production, it is important we understand not only the pollutants of past and present, but also the potential pollutants of the future. The impact of emerging contaminants, such as endocrine disruptors, pharmaceuticals, hygiene products and other substances on the environment is often uncertain and the laboratory plays a key role in gaining further insight into the effects of these products.

Considerable developments in analytical technology over the last few years have enabled Chemists to identify a growing range of emerging compounds in the aquatic environment. These advancements have also meant compounds can be detected at significantly lower levels than in the past, allowing scientists to conduct predictability studies into a wider range of compounds. Examples of classes of other known emerging contaminants, that need further research to understand any potential environmental impact, are shown in the table adjacent.

Where studies have identified ecotoxicological data to suggest harm to the environment, wildlife or present a risk to human health, they have often led to the development of legislation to monitor that compound. As was the case with a number of the substances listed as Priority Hazardous under the WFD. These include Pentabromobiphenylether, a deriviative of the brominated flame retardant group and commonly used in household products including fabric and furniture, C10-C13 chloroalkanes; substances used in paint, glue plastic and as a coolant, 4-nonylphenols; breakdown products of the surfactant group the alkylphenol ethoxylates and di(2- ethylhexyl)phthalate (DEHP): a plasticizer used to soften otherwise rigid plastics and polymers, predominantly in PVC.

The effects of very low concentrations of many emerging compounds are still relatively unknown; therefore the development of analytical methods to detect these substances is essential to determining their risk to the environment. STL have a dedicated Research and Development facility that works with Water Utilities, Pharmaceutical companies and other industries to determine the presence of compounds in wastewater, sewage sludge, surface and ground waters.

The laboratory is particularly experienced in developing analytical methods to determine Endocrine Disrupting Chemicals (EDC’s) in the aquatic and terrestrial environment. STL have invested in state of the art instrumentation, which facilitates the determination of a wide range of EDC’s at extremely low concentrations, for example, steroid oestrogens in sewage influent, effluent and sludge, surface and potable waters, sediment and soils and Alkylphenols, Alkylphenol Ethoxylates and their Degradation Products.

Emerging compounds have not only been identified in waste, surface and ground waters. Recent studies in the United States identified pharmaceutical products or their by-products in treated drinking water. These compounds have been found at levels substantially below prescribed doses, but their presence is of significance since the effect on human health at such low concentrations is relatively unknown. As we continue to obtain drinking water from sources that have received discharges from municipal wastewater treatment plants, the likelihood of these compounds being identified increases. The laboratory is playing a key role in developing techniques to identify these and other products, for example, veterinary products, pesticides and drugs of abuse in treated drinking water.

The environmental laboratory has a responsibility to identify compounds that we know can pollute the environment and also study those compounds where the risks are not yet understood. As the need to protect our aquatic and terrestrial environment becomes ever more Waste Water Analysis critical, it is vital we are able to respond to pollutants swiftly. The laboratory has an essential role to play in identifying compounds and their possible source, participating in investigative studies, setting acceptable levels and monitoring treatment and removal technologies. STL are one of the leading laboratories in the UK applying robust, quality assured, analytical methodology, to monitor the chemical and ecological status of aquatic systems and developing techniques to support EU compliance requirements. 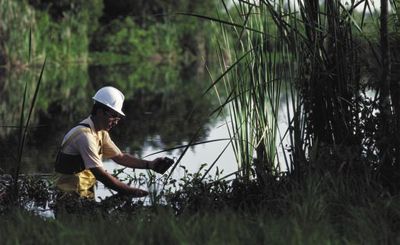