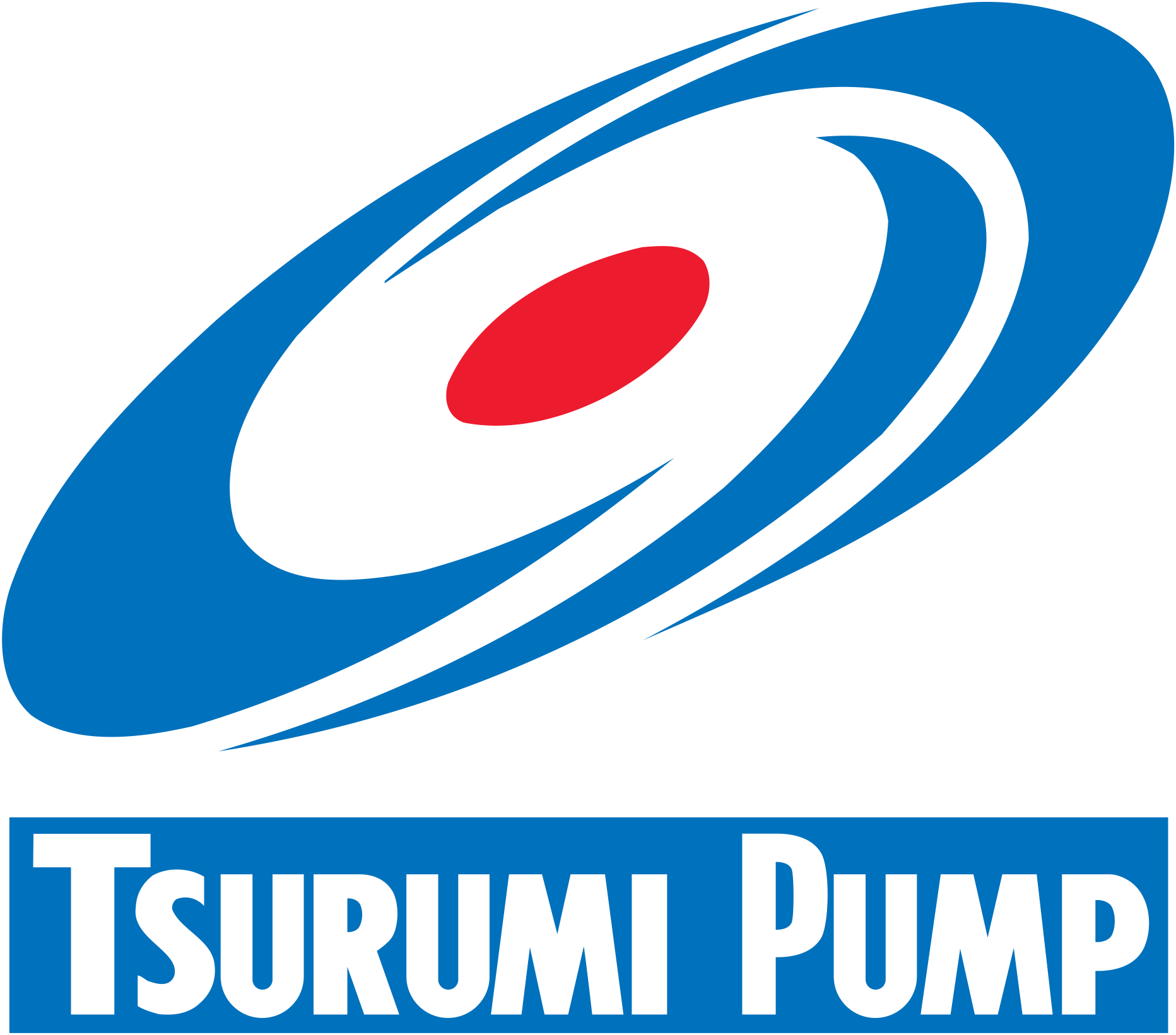 Japanese TRN submersible aerators have proven themselves in the pilot project of a medium-sized sewage treatment plant. After completion, the operator immediately placed a follow-up order and retrofitted the plant: Extensive maintenance is a thing of the past, and the energy balance is significantly improved. It is interesting to take a look at the technical background of the process.

The Klettgau wastewater treatment plant treats domestic, commercial and industrial wastewater from nine communities in the German-Swiss border region. It is located outside the town of Hallau in the canton of Schaffhausen, west of Lake Constance.

After 36 years of operation, it was decided to carry out a complete renovation. “The plant had to be comprehensively renovated, extended and adapted to the regulations,” says plant manager Werner Bringolf. It was once designed for 14,000 inhabitants. Today it is dimensioned for 21,000. A mixing channel system with a total length of 26 km ensures a dry weather intake of 6,400 m3 per day. The modernisation was completed in 2014. 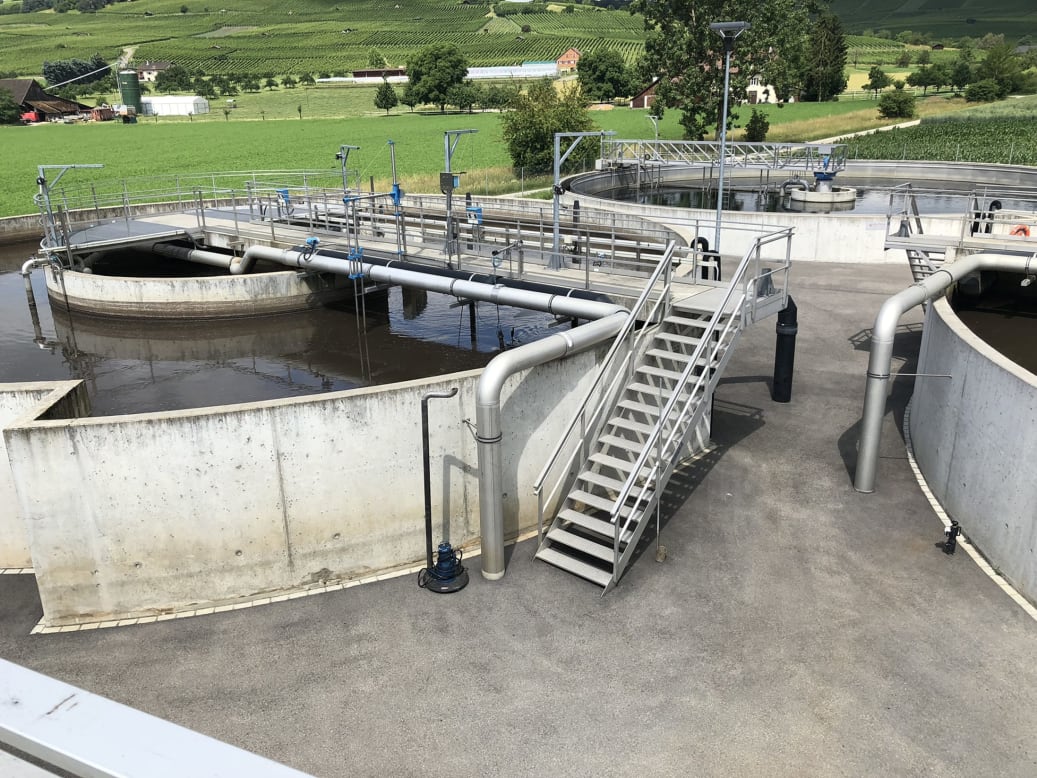 There is an aerated sand trap that removes sediment and inorganic substances from the wastewater. This is combined with a grease trap to float out grease, oil and other floating substances. The construction element was designed as a round basin into which outside air is introduced by a submersible aerator for material separation. The solids settle at the bottom of the separator cone and the light materials separate. This combined solution can be found in many municipal sewage treatment plants.

“We were not completely satisfied with the French submersible aerators,” reports Bringolf. “They often had to be serviced. In particular, the abrasive waste water caused leaks in the mechanical seal. “However, we also put the power consumption of the motor up for discussion. It is an important factor in the operating time of the plant, which runs around the clock and therefore has no downtime.

At IFAT, they turned to the pump manufacturer Tsurumi. The Japanese company is known in the waste water sector for its TRN submersible aerators. At the trade fair, the experts calculated the demand and suggested a comparatively small replacement model. “We agreed to a test installation”. Pumpen Lechner near Bilten took over the support of the customer on site.

“after 36 years of operation, it was decided to carry out a complete renovation”

Hallau has two flotation tanks with a capacity of 70 m3 each. The 50TRN42.2 submersible aerator selected by Tsurumi has a rated output of 2.2 kW, rotates at 1450 rpm and weighs 140 kg free-standing. It was mounted in a grit chamber (210 cm diameter) suspended at a depth of two metres. In order to compensate the own movement of the unit by the torque of the rotor, the tube of the air supply was fixed to the tank, and therefore also the submerged aerator.

After almost a year of continuous operation, early maintenance was carried out to check the condition of the unit. The competitor’s product ran parallel in the second tank.

The operator was astounded by the condition of the replacement unit: “The aerator was in absolute new condition,” emphasizes Bringolf. No wear or abrasion was detected. “Mechanical freedom of movement was given, the oil was as good as new, and the cable as well as the windings were also continuous and error-free after measurement. Even the degree of contamination was insignificant: “Nobody expected that,” he reveals.

In this respect, experts suspect a weak point in the aerator in question. If the mechanical seal had direct contact with the rough waste water, small particles could penetrate the sealing gap and destroy the sliding surfaces, reported Tsurumi. The manufacturer has therefore opted for a different concept for its submersible aerators and pumps: the double mechanical seal is located on the inside and is shielded from the abrasive medium by an air cushion during operation. 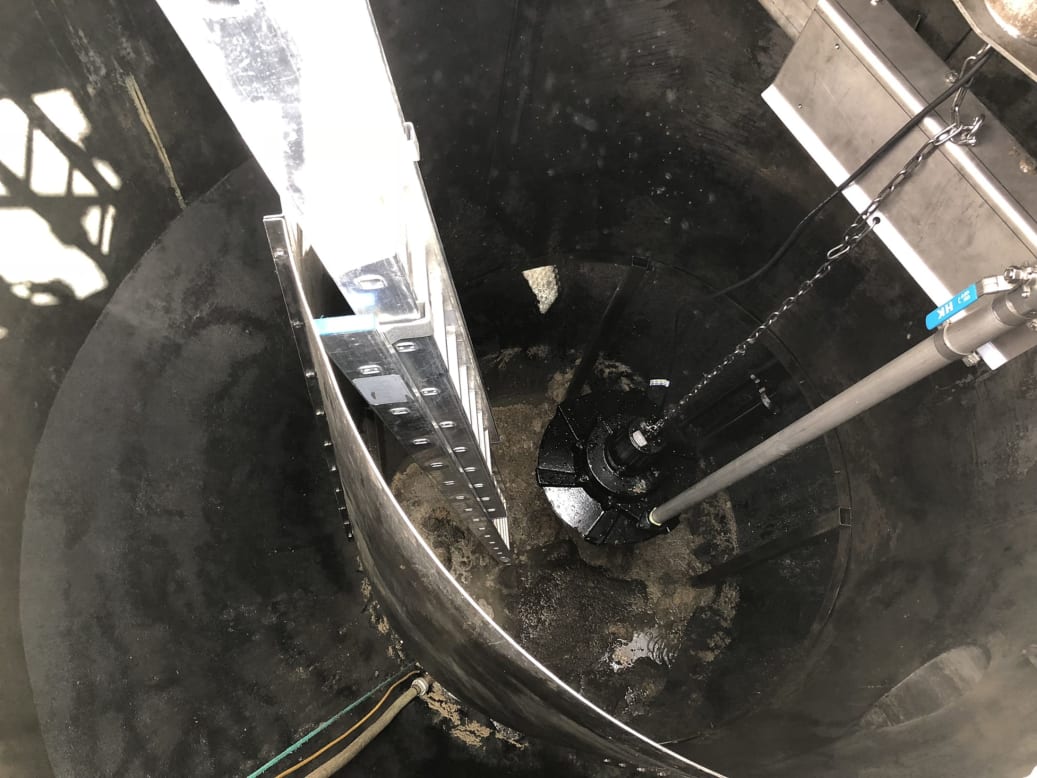 The cleaning performance of the TRN corresponds to that of the competitor’s product – which should be the case, as both were designed to suit the operator’s requirements. Nevertheless, this point is surprising, because the Japanese aerator is satisfied with 2.2 kW motor power in contrast to the competitor with 3.0 kW. For the flotation in Hallau, this results in a saving of around CHF 2700 per year.

For the customer it was clear that the entire clarification stage was to be converted to Tsurumi equipment. The decision was made during the maintenance check. A nice confirmation for the Japanese: They offered a technically reliable solution that also saves costs for the customer. What more could you ask for?

The self-priming TRN submersible aerators are a key product of the manufacturer. The portfolio includes ten models with engine outputs from 0.75 to 40 kW. Submersible aerators work on the principle of a pump but move air instead of water. This makes them generally more fail-safe, even in long continuous operation.

Their fine air bubbles are produced according to the Venturi principle, which also sets the tank contents in motion. The aerators do not require a compressor or any structural attachment, as they are simply lowered to the ground or suspended. Only cable, air supply and holding chain are required. The manufacturer’s expertise in this field is rich: Tsurumi has specialised exclusively in pump technology since 1924, favours generously dimensioned designs and uses the hardest materials.

The technical meticulousness of the Japanese is remarkable. This can be seen in detailed solutions such as the individually encapsulated electrical conductors or the aforementioned internal double mechanical seal. Measures that may have contributed to Tsurumi’s rise to become the world’s largest construction pump manufacturer. 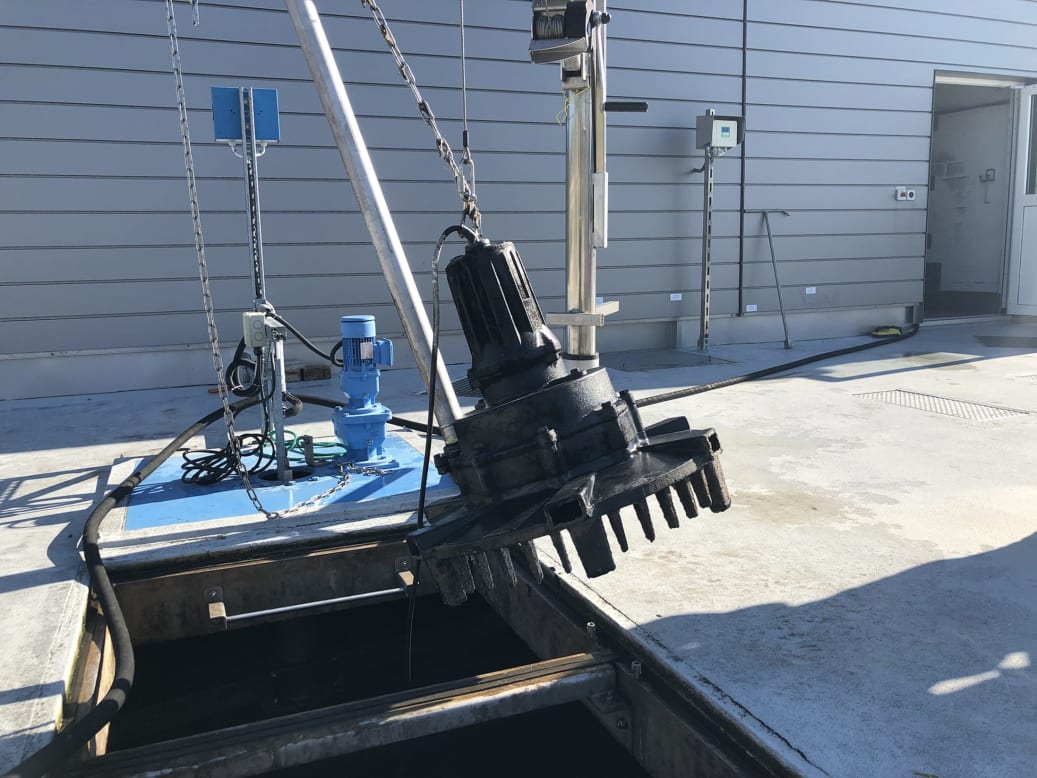 The decisive factor in protecting its mechanical seal is a centrifugal oil lifting device: a patented in-house development for lubrication and cooling that is not available on the market for other ventilators. There, the seal is cooled by the waste water, which causes it to come into contact with the medium. With Tsurumi, on the other hand, there is always a cushion of air in front of the sensitive seal when the aerator is in operation, which keeps away the aggressive waste water. Chemical substances, granular particles, synthetic fibres: they can only reach the mechanical seal to a very limited extent.

Fibres often cause problems for the impeller of the aerator. The design previously used in Hallau had an external impeller. Such a design is susceptible to impurities and deposits – which lead to imbalances, the typical consequences of which are worn out bearings. Here, too, Tsurumi takes a different approach, as the impellers are protected on the inside by a wear plate. A less susceptible design in terms of wear, clogging and plugging.

Tsurumi is a one-stop-shop for all your pumping needs. We have over 250 models in our range and a pan-European network of distributors. 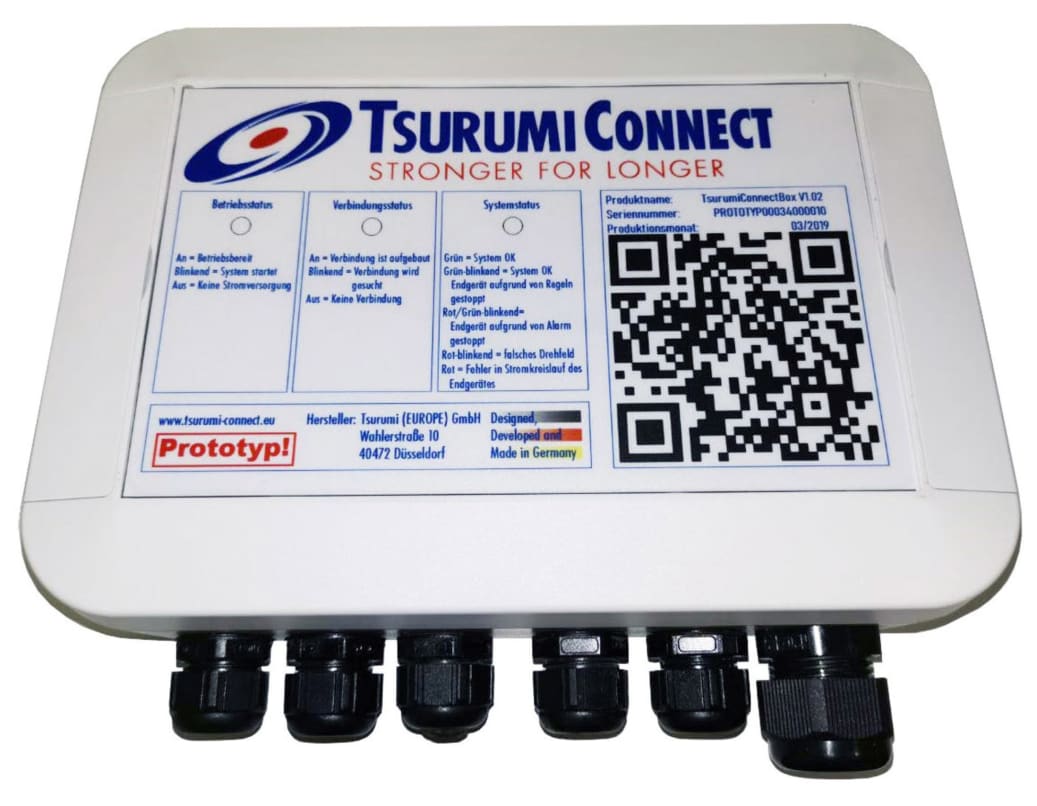 Water Logistics for the “Industry 4.0” 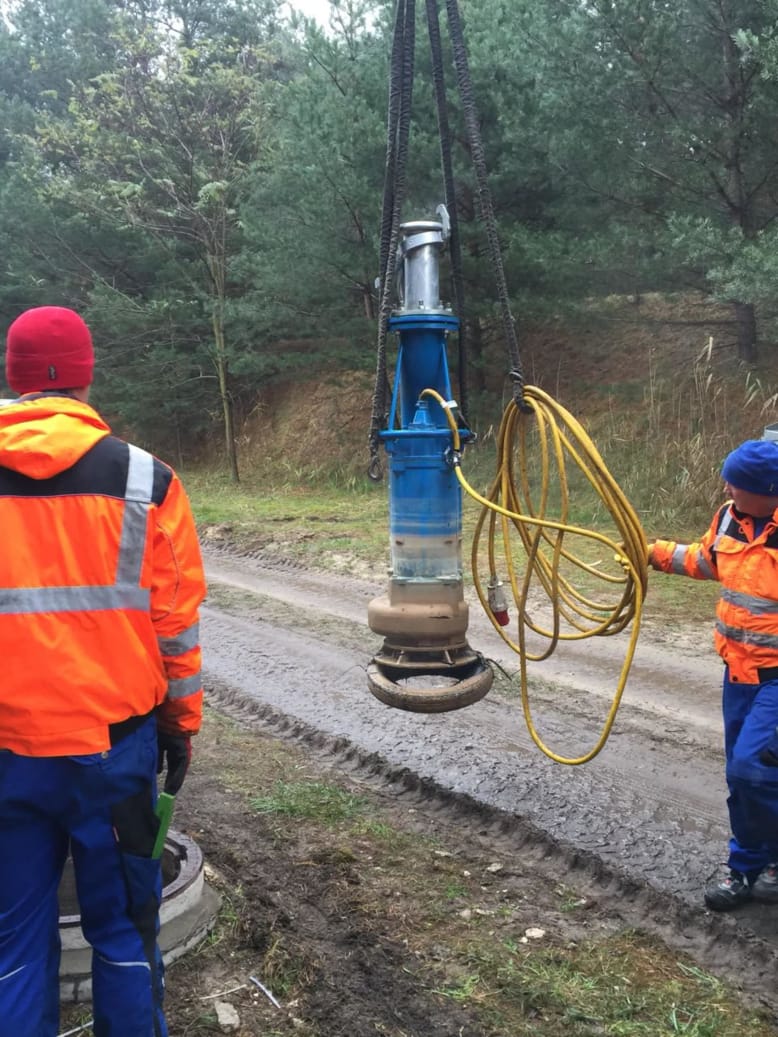 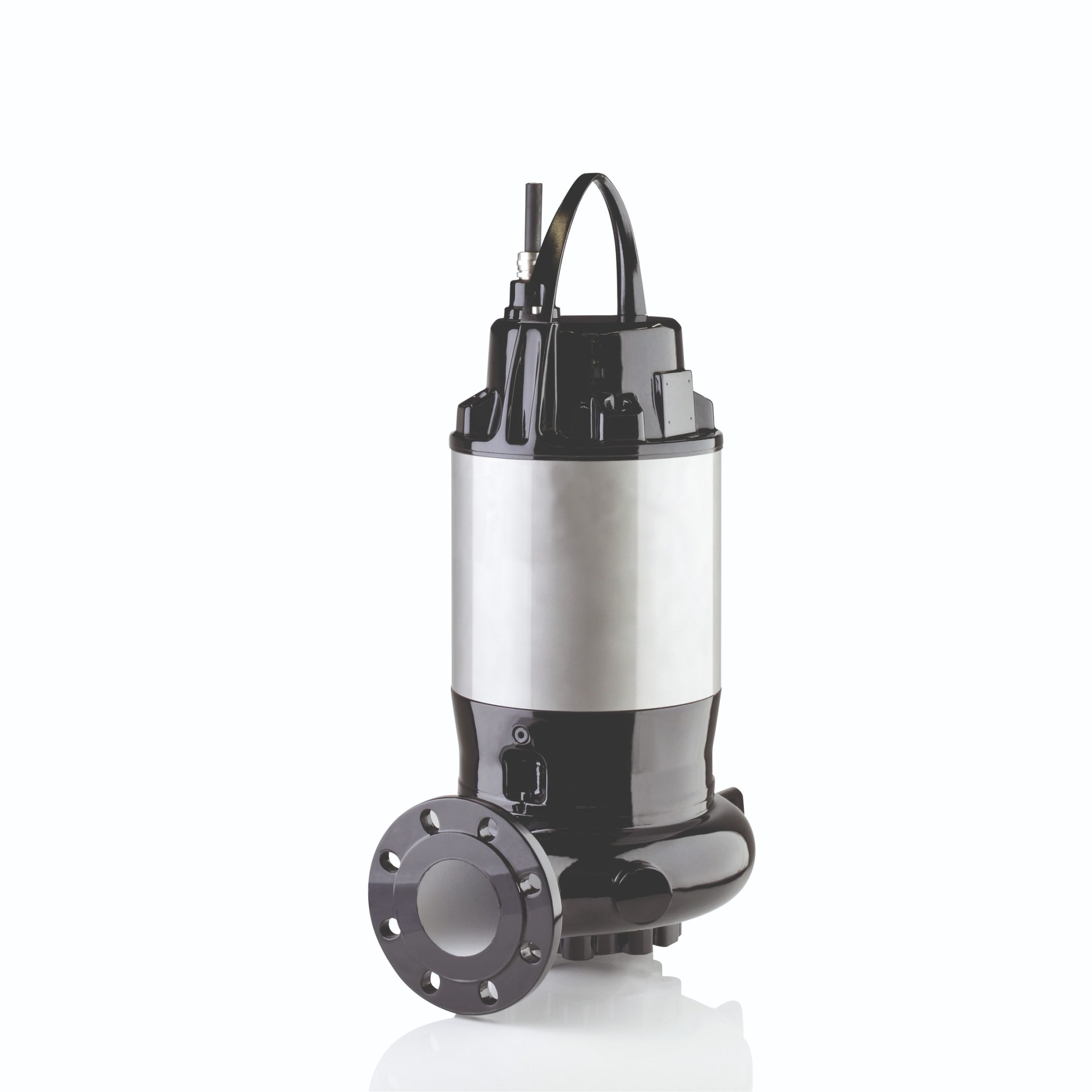 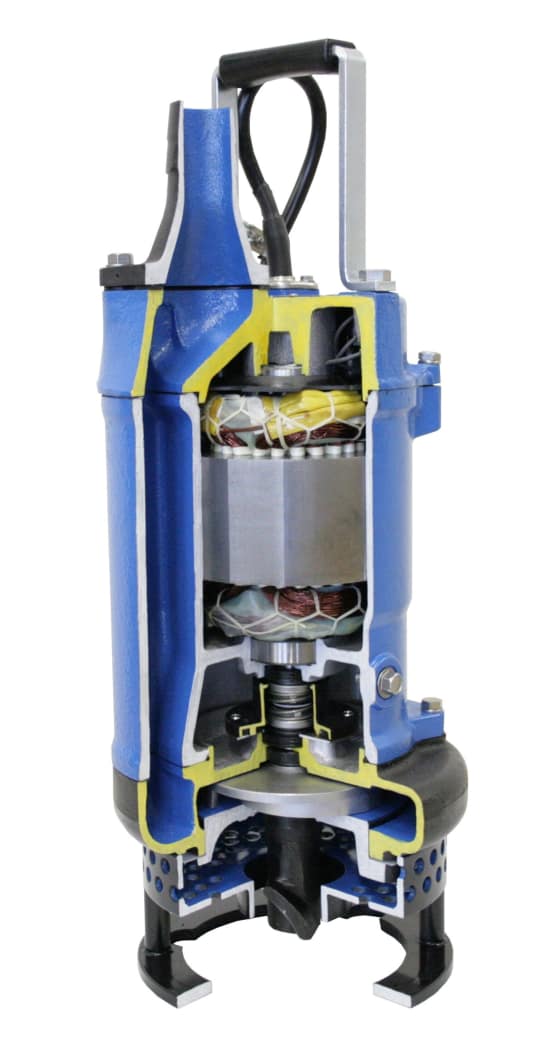 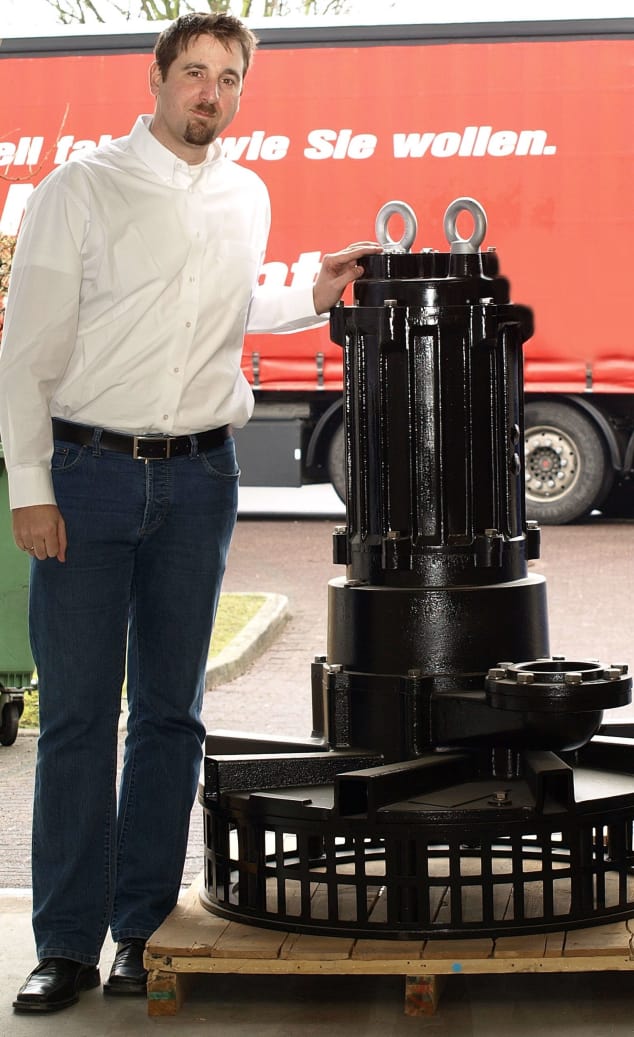