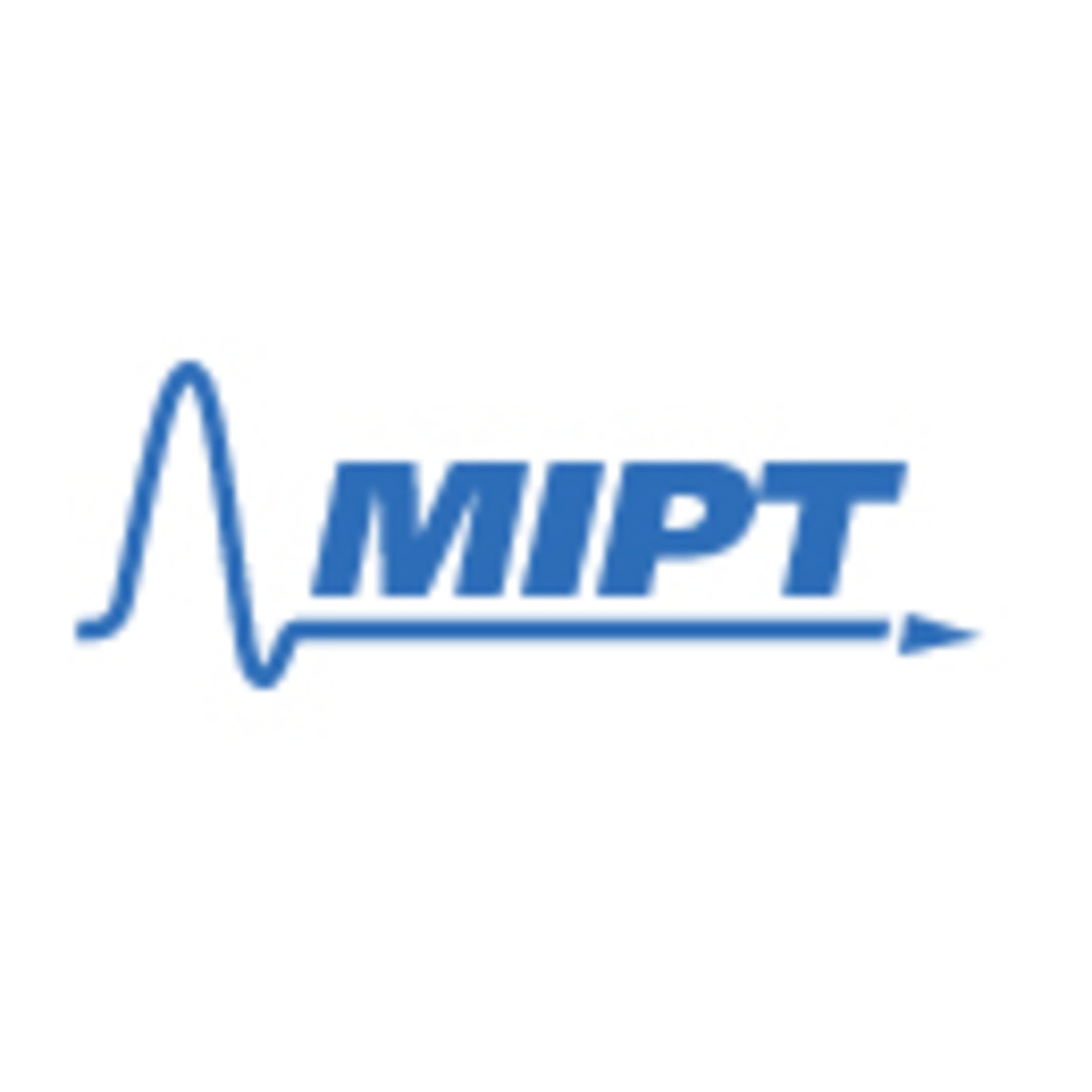 By Moscow Institute of Physics and Technology

Russian researchers have developed a mechanism for detecting molecular hydrogen using green light to illuminate a nanocrystalline composite sensor based on zinc and indium oxides. For the first time, this enables a gas sensor operating at room temperature. The paper was published in the journal Scientific Reports.

Multisensor arrays for determining gas mixture composition are currently being developed. These are monitoring systems incorporating multiple sensors that target individual gases. Such sensors can be used to analyze air quality both outdoors and in closed spaces. Tracking atmospheric pollution remains a vital concern for many developed countries. Because residential communities tend to cluster around industrial areas, it is necessary to have a mechanism in place for controlling harmful emissions from plants and factories.

Besides that, air composition measurements are required at nuclear power plants, on submarines and space stations, and at other facilities where access to fresh air is not immediately available: If the concentration of carbon dioxide increases or a toxic substance leaks into the ventilation system, this might put the lives of personnel at risk.

Commercial gas mixtures such as gas fuels also need precise composition monitoring. Among them is hydrogen. Used as gas fuel, it could conceivably replace hydrocarbons. It is a clean fuel that releases nothing but water vapor when burnt. In addition, the efficiency of burning hydrogen is 10 to 20 percent higher than that of hydrocarbons. Some car manufacturers have already started phasing in hydrogen seeing it as a fuel of the future. And yet the Hindenburg airship disaster is a sad reminder of how dangerous hydrogen can be.

Until recently, gas sensors based on nanocrystalline metal oxides had operating temperatures between 300 and 500 degrees Celsius. This made them unsafe for the detection of explosive or combustible substances. Moreover, to maintain these high temperatures, a lot of power is required, making it impossible to embed such gas sensors into the circuit boards of portable devices.

To solve this problem, Professor Leonid Trakhtenberg of MIPT; Pavel Kashkarov, director of the Institute of Nano-, Bio-, Information, Cognitive and Socio-Humanistic Science and Technology; Alexander Ilin and Pavel Forsh from Lomonosov Moscow State University; and their colleagues from Semenov Institute of Chemical Physics proposed sensors capable of operating at room temperature. Their new nanocomposite sensors are based on zinc and indium oxides, and their efficiency is maximized by green light illumination. The proposed device could be used to detect combustible, explosive, or poisonous substances in the atmosphere even at low concentrations.

“The mechanism consists in the light-induced transition of the nanocrystalline sensor components into a nonequilibrium state and the resulting change in the photoconductivity of the sensor interacting with molecular hydrogen. This effect is linked with the dependence of photoconductivity on the nonequilibrium charge carrier recombination rate,” explains Maria Ikim, a doctoral student at the Laboratory of Functional Nanocomposites of Semenov Institute of Chemical Physics of the Russian Academy of Sciences. 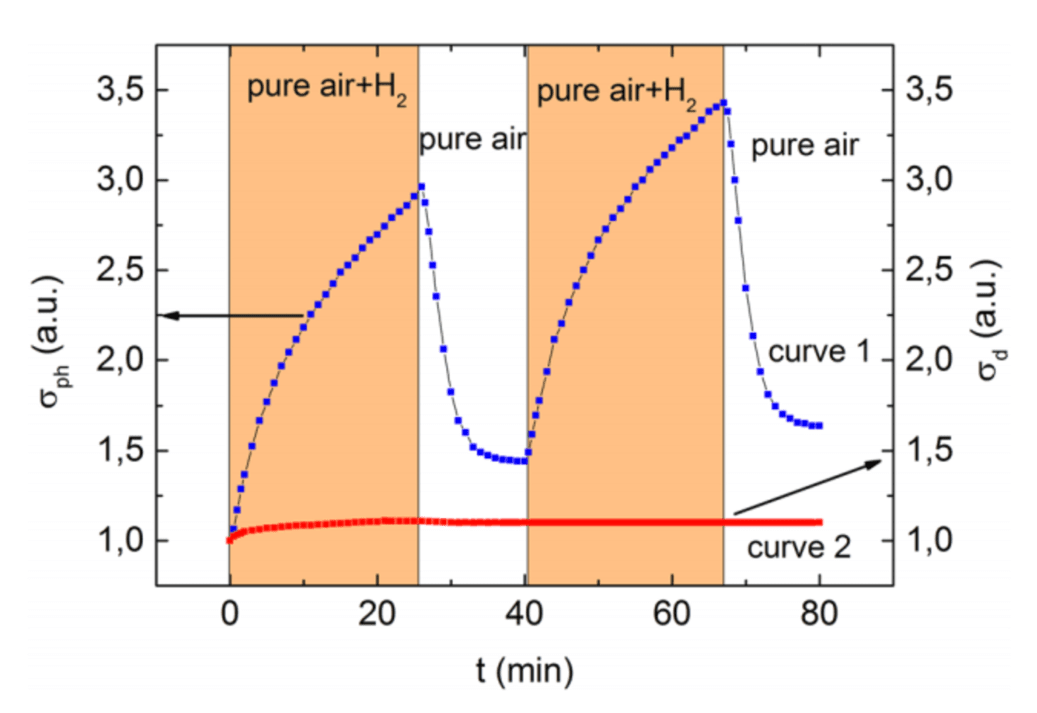 Photoconductivity (curve 1) and electrical conductivity (curve 2) of a composite film made of zinc and indium oxides in a 1-to-9 ratio by weight under periodic exposure to air containing hydrogen. Orange marks the scope of sensor response.

“The detectors that we have developed differ from the conventional semiconductor sensors in that they operate at room temperature. This eliminates the danger of combustion or explosion, when flammable or explosive substances are involved,” says Leonid Trakhtenberg of the Department of Chemical Physics, MIPT, who holds an ScD in physics and mathematics. “Most papers on sensor photoactivation discuss the effects of ultraviolet light on sensors and focus on the detection of oxidizing gases. But the efficiency of ultraviolet light diodes is low, while their cost is far greater than that of their counterparts emitting in the visible part of the spectrum. By working with hydrogen, we explore the possibilities of the detection of reducing gases.”

The paper reported in this story proposes a novel mechanism of sensor response photoactivation, which is illustrated by the image above. It accounts for the transition of charge carriers into a nonequilibrium state. The process involved is universal: It can be used to interpret sensing results in both oxidizing and reducing gases.

The sensors proposed by the authors could be used to monitor atmospheric air composition and analyze the chemical makeup of gases used in industrial processes. Although the study focuses on gases, the same sensors could be modified to target liquids.

Moscow Institute of Physics and Technology

MIPT is one of the leading Russian universities in the areas of physics and technology. The university holds a reputable position in the country and abroad in qualified graduate training. Students and graduates of MIPT are representatives of an elite circle who, thanks to their interdisciplinary scientific surroundings, are able to fully realize their potential. The strong alumni community is spread all over and includes top range scientists, businessmen, politicians, people of art, many of who are awardees of prestigious international prizes. Phystech (the university) and phystechs (its alumni) are strongly proud and supportive of each other.

Connect with Moscow Institute of Physics and Technology

POPULAR POSTS BY Moscow Institute of Physics and Technology