Ocean conservation initiative Project Zero has released a star-studded campaign video to highlight the urgent need to protect 30% of the ocean in order to put the brakes on the climate crisis and create a sustainable future for life on Earth.

Project Zero is a global movement whose mission is to awaken the fight for the ocean and support its vital role in maintaining our planet’s ecological equilibrium.

Co-founder Tyrone Wood is joined on-screen by some of the initiative’s most passionate ambassadors from the worlds of film, fashion, music and sport as they call to back Project Zero and turn the tide on the climate crisis, including:

The video launch follows the unveiling of Project Zero’s unique Christmas installation in collaboration with London’s iconic Carnaby Street. The innovative seascape reminds visitors of the ocean’s spectacular beauty and life-giving role in our lives.  Every element of the installation was created using recycled and reusable materials. Visitors to London this festive season can ‘Tap to Donate’ £3 to Project Zero at locations throughout Carnaby including 14-18 Fouberts Place, Shakespeare’s Head Pub, JinJuu, White Horse Tavern, Department of Coffee and Social Affairs, and on the hoarding at Broadwick and Carnaby.

Project Zero is a global movement supported by renowned scientists, business leaders, campaigners, culture makers and ocean experts, who are all working together to awaken the fight for the ocean.

The greatest threat to our planet is climate change and if we don’t take action now, the collapse of civilization and the extinction of much of the natural world is on the horizon. Today a mere 2% of the ocean is strongly protected. The ocean needs safe havens where it can replenish, and fortify itself against climate change, overfishing and pollution. That means strongly protecting at least 30% of the ocean by 2030, from the Arctic to the Antarctic, coastal to high seas areas and everywhere in between. 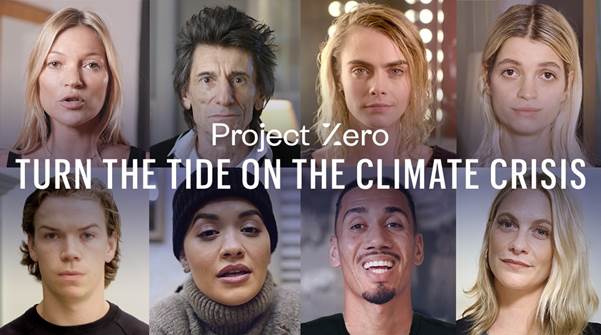