By Swiss Federal Institute of Aquatic Science and Technology

Analyses of environmental gases which previously required months of laboratory work can now be carried out rapidly in the field. A group of Eawag scientists have developed a portable mass spectrometer allowing on-site measurements – and a spin-off has been created to commercialize the new system.

What are the effects of volcanic gases accumulating in Lake Kivu in central Africa? How does the Rhine’s groundwater system function near Pratteln? What is the best way of controlling greenhouse gas emissions from a landfill in northeastern Switzerland? Answers to questions like these can be provided by a newly developed portable mass spectrometer – by the researchers named “miniRuedi” – which allows gas and water samples to be analysed on site and in real time. For example, the concentrations of different gases were determined at a landfill during a one-day measurement campaign. This study supports the optimisation measures to aerate the landfill in order to reduce the formation of methane, a strong greenhouse gas.

System in a suitcase

Eawag environmental physicist Matthias Brennwald, who developed the portable mass spectrometer, explains: “Our instrument, weighing 13 kilograms and mounted in a wheeled suitcase, can be taken to the most remote locations. Once it’s been installed on site, the Mini-Ruedi can immediately and efficiently measure gases using very small samples, so it doesn’t interfere with the natural dynamics of the environment.” The system, which can operate autonomously, provides continuous measurements of a wide range of gases. The most suitable sites and times for sampling can thus be identified immediately. Long-term operation is also possible. As Brennwald points out, “Analyses which in the past would have been inconceivable – partly for financial reasons, as they’d have involved months of laboratory work – are now suddenly possible.”

Two weeks instead of six years

For example, using the Mini-Ruedi, the Eawag team only needed two weeks to complete a groundwater analysis project in Australia. With conventional methods and instruments, Brennwald estimates, the team would have required about six years in the lab. Nonetheless, the precision of the new system’s measurements is remarkable, with an analytical uncertainty of one to three per cent (versus one to one-and-a-half per cent for a much more expensive, laboratory-based spectrometer). Other advantages offered by the system are its low power consumption (50 watts, no more than a traditional light bulb) and maintenance-free operation. Brennwald emphasizes that “for people used to working with measurement instruments, it only takes a day to learn how to handle the portable system.”

Although the portable mass spectrometer may look complex at first glance, it actually consists of just four main elements (Fig. 1). The incoming gas passes slowly through a ten-metre-long capillary tube, reminiscent of an elephant’s trunk (hence the system’s name, “Ruedi Rüssel” being a well-known chain of petrol stations in Switzerland). Two pumps generate the requisite vacuum in the chamber where the composition of the gas mixture and the abundances of the various gases are measured. The system’s electronic “brain” is controlled by software developed by Brennwald himself. From here, the results are transferred to a computer.

If gases are to be analysed in water samples (e.g. from lakes), a membrane is used to separate the gases from the water, so the system’s delicate components are not exposed to moisture.

Just two years after the Mini-Ruedi was first deployed in a project, another eight instruments are now in use – a total of five at Eawag and four at the Universities of Geneva and Tübingen and the Mont Terri rock laboratory. As Matthias Brennwald has received numerous enquiries (not connected with Eawag projects) about purchasing the system, he decided – in consultation with Eawag – to establish a spin-off. Since April, he has been developing the portable systems under the name of Gasometrix; as a loyal Eawag employee, he adds, this is merely a sideline. The first client acquired for his own company is the University of Oxford.

Mini-Ruedi applications all over the world

As this compact system (60 cm x 40 cm x 14 cm; 13 kg) can analyse various gases in less than a minute and can be deployed at remote locations, it is already widely used (for examples of applications in Eawag research projects around the world, see: http://gasometrix.com/map/). It has been used, for example, for water analyses to assess groundwater systems or to investigate anthropogenic effects on waterbodies. In a recent project in the Czech Republic, soil samples were analysed to study gas exhalations from springs. Also planned are analyses to be conducted for an oil and gas company in Norway: here, gas flows are to be monitored so that methane or carbon dioxide leaks can be detected.

Main Picture – The portable mass spectrometer in a wheeled suitcase. The coiled “trunk” through which the incoming gas passes can be seen in the middle at the top.

Eawag is a world-wide leading institute for research, education, and expert consulting in aquatic science and technology. We take an integrated view of the water environment and combine basic research to achieve fundamental advances in the aquatic sciences with applied research that addresses important societal needs.

Eawag researchers work closely with practitioners to maintain the bridge between theory and practice.

Connect with Swiss Federal Institute of Aquatic Science and Technology 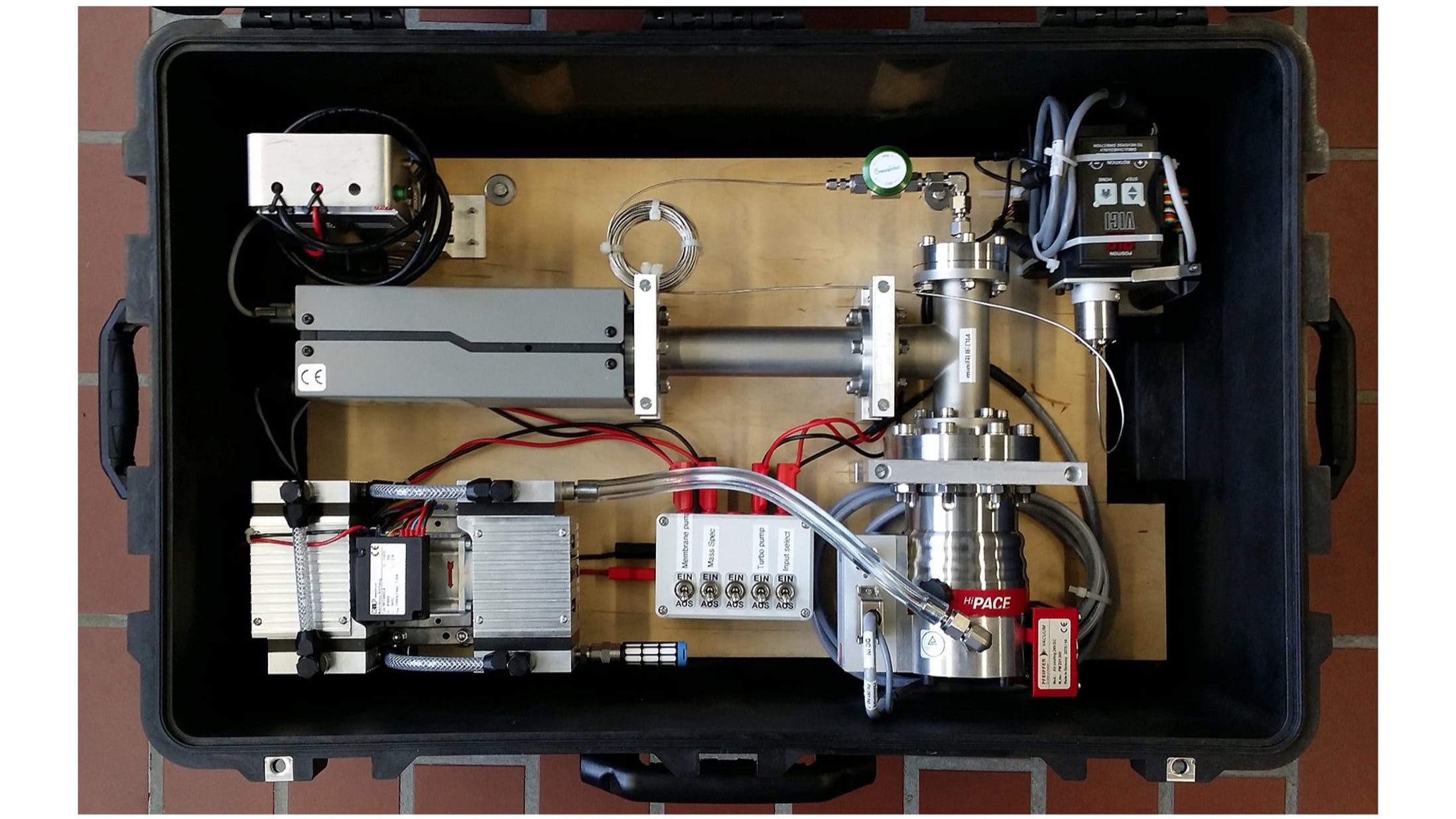