Novel CEM gas detection module for SO2 and NOx

Continuous emission monitoring (CEM) is a rapidly growing market worldwide [1]. The combustion of oil, coal and natural gas is still the most important energy source for power generation. In the exhaust gas of these power facilities the content of SO2, NO and NO2 is significant, so that exhaust gas treatment and reduction is necessary. The emission limits for these components are decreasing and regulated by national and international guidelines. Especially in developing countries the demand of low cost CEM equipment, with sufficient measurement performance, is highly increasing. 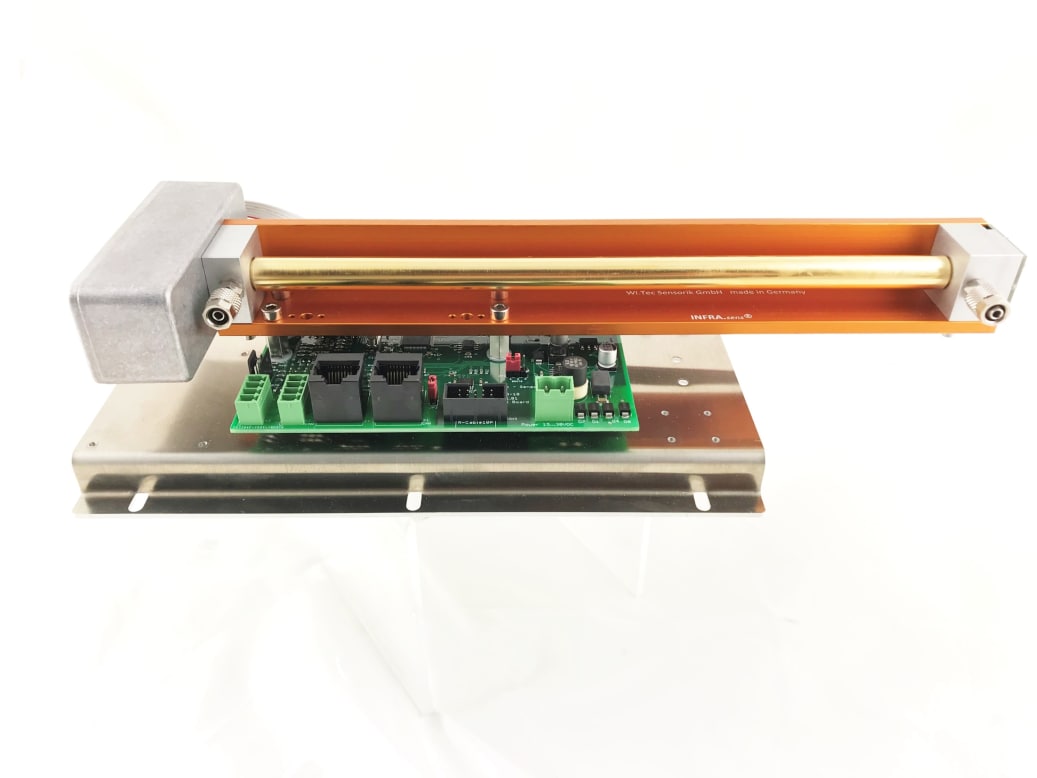 Exhaust gas emissions from the maritime sources are also regulated by international law (e.g. IMO Marpol Annex VI). For this application the gas analyzer monitoring system is also based on CEM and mobile Instrumentation (Marpol 73/78 Annex VI and Amendments).

Another important application is the mobile/portable flue gas analysis (e.g. PEMS ). In this case small size and low power operation is required. For both applications the Wi.Tec Sensorik GmbH developed a novel CEM gas detection system based on photometric UV absorption technique.

Especially for mobile applications and rugged operation on ships the gas analyzer should have no moving parts like chopper blade or moving filter elements in the optical path/bench. Existing CEM gas analyzers mostly are using rotating filter wheels and mechanical chopper. 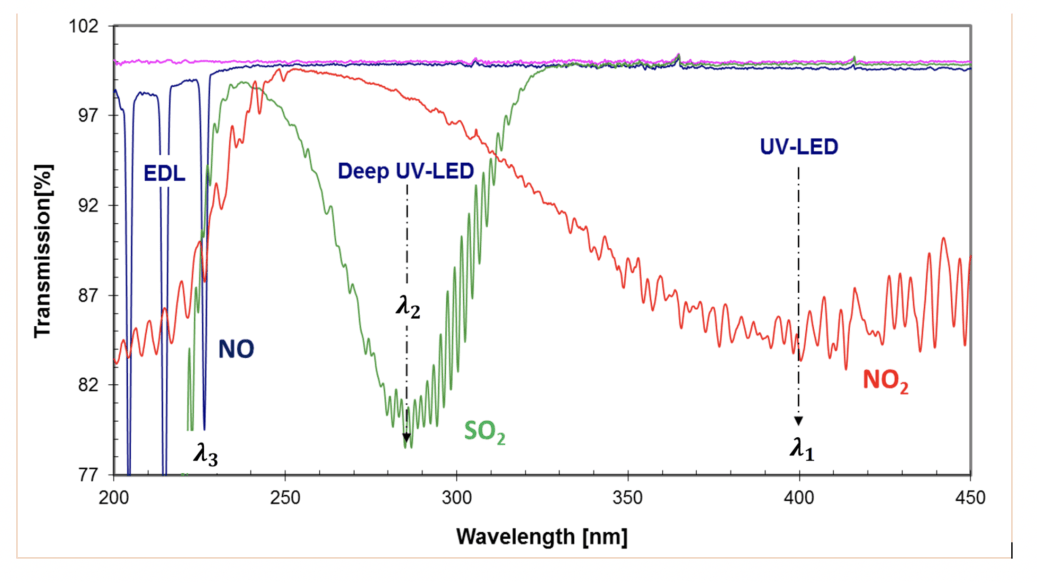 In the UV-range the absorption of radiation is based on the excitation of molecular electronic levels. In Fig.1 the absorption bands of NO, NO2 and SO2 are shown for gas concentration of 1000ppm in a 100mm sample cell. The characteristic wavelengths λ of the maximum absorption are λ1 = 405nm (NO2), λ2=285nm (SO2) and λ3=226nm (NO).

The fraction of absorbed radiation is according to the Lambert-Beer-Law:

For practical purposes the Lambert- Beer-Law can also expressed by the gas concentration c (in ppm∙10-6) and the coefficient of absorption α (in cm-1):

The principle arrangement of the ULTRA.sens® is shown in Fig.2. Two different UV-LEDs are used to generate the suitable UV-radiation for NO2 (UV-LED1) and SO2 (UV-LED 2). The LED sources are pulsed alternating [5]. Before the sample cell a high efficient beam splitter is located in order to separate the reference radiation. Using this additional information it is possible to eliminate the intensity drift of the UV-LED during the lifetime (app. 10 years). For different gas concentration ranges a 100mm (medium range) sample cell and a 250 mm sample cell (low range) is available. 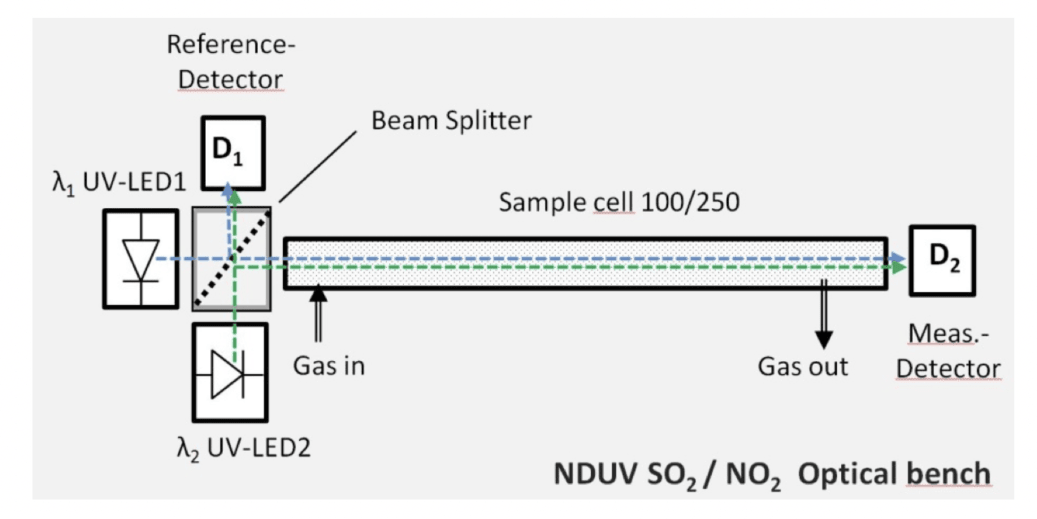 The detection of NO in the UV Range is a very attractive method and suitable for CEM application. Meinel [2] described this method first time in 1972. The physical principle is shown in Fig. 3. The radiation coming from an Electrodeless Discharge Lamp (EDL) has three selective emission bands for NO. The Lamp is filled with N2 and O2 [5]. In the excitation area of the Lamp Nitrogen Oxide (NO) is generated and emits molecular resonance radiation [4]. The 226.6 nm band is mostly applied for the NO detection since the cross sensitivity to other gases is very low. In order to select this emission band, it is necessary to integrate a narrow band pass filter. To achieve a good long term stability of the gas readings, a reference detector is integrated before the sample cell. The reference detector monitored the lamp intensity in order to compensate the intensity drift simultaneously. The measurement detector received the attenuated intensity I(c) due to the NO gas concentration c in the sample cell. The design is very similar to the NDUV SO2/NO2 measurement.

Fig. 3: Physical arrangement of the UVRAS-ULTRA.sens®

The performance of the described UVRAS-ULTRA.sens® is shown in Fig. 4. for different gas concentrations. The first step was started from Nitrogen (Baseline) to 300ppm NO. After the first step a span calibration was done with 300ppm NO. Then the gas concentration was reduced stepwise using a precise gas blender. The deviation between the expected value and the gas reading is less than 1 ppm NO. The variation of the values is less then 300ppb as shown in the enlarged step at 180ppm NO (gas reading = 179.7ppm). 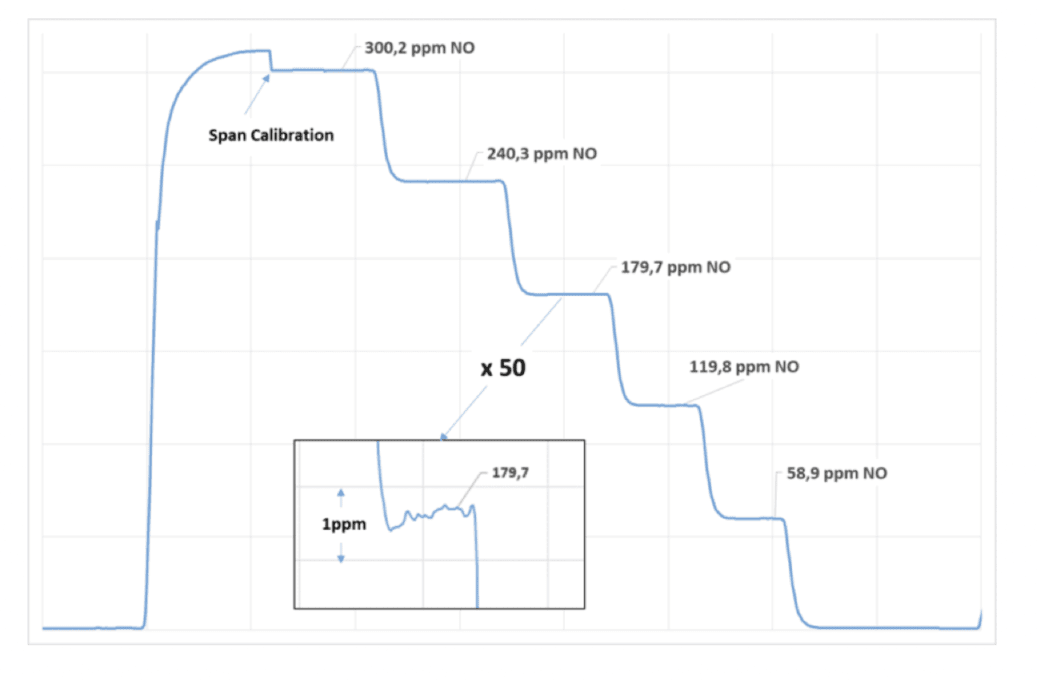 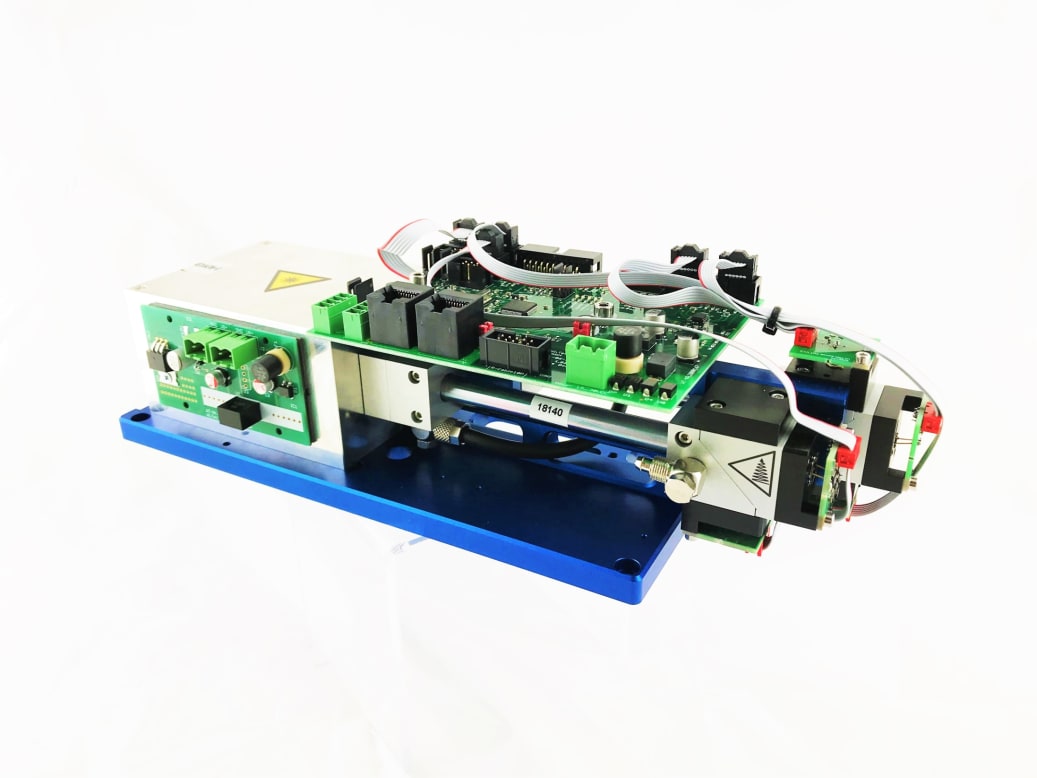 In Fig. 5 both optical benches integrated in one module are shown. They are charged with a 100mm sample cell. The total arrangement is very handy and suitable for integration into a 19” CEM gas analyzer or a mobile Instrument (e.g. PEMS).

Fig. 5: Combination of LED based NDUV detection of SO2+NO2 and EDL based UVRAS for selective NO detection in one handy ULTRA.sens® OEM module

The signal conditioning main board could run both optical benches simultaneously with a 16bit digital resolution. The data interface is based on RS232 and CANopen. The operation voltage is 24VDC with a power consumption of less than 4Watt (without temperature controller). 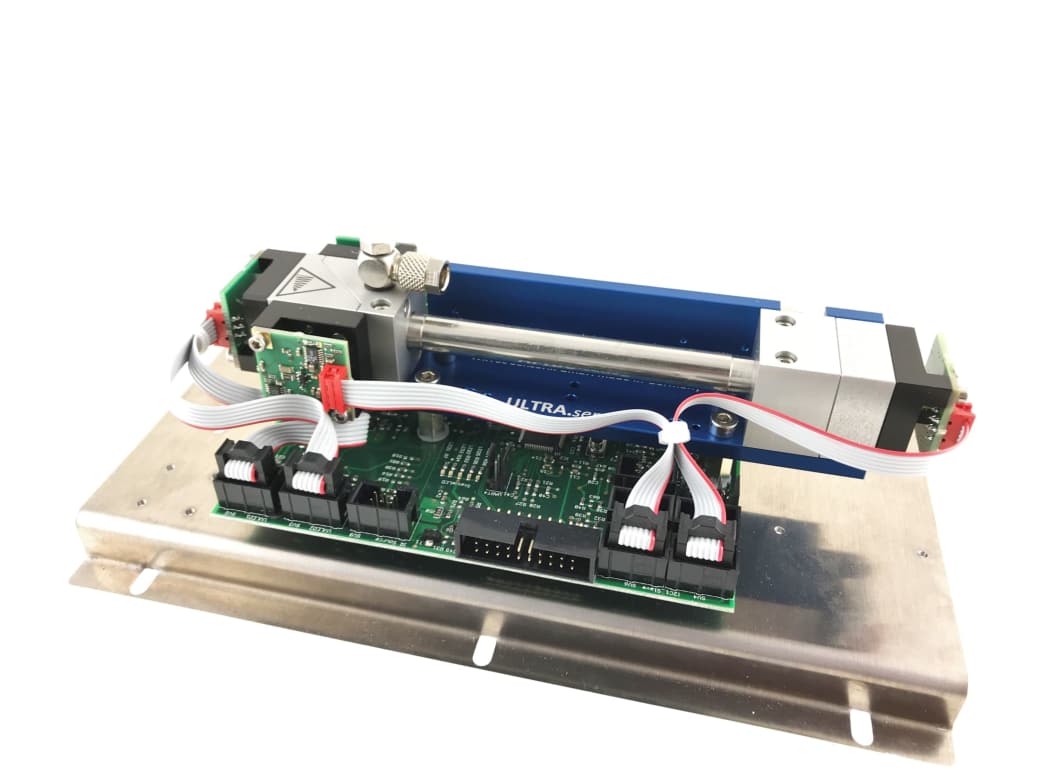 The presented combination of an LED based NDUV optical bench (SO2+NO2) and an EDL based UVRAS (NO) is very unique. Since the ranges (100ppm/300ppm/2000ppm/3000ppm) and the detection limit (<0.5ppm) are sufficient for many applications like CEM, Marpol and PEMS the market potential is very high. The ULTRA.sens® OEM module is easy to integrate and the power consumption is low (<4W). The cross sensitivity to other gases like H2O, CO, CO2 and Hydrocarbons is negligible. Furthermore it is possible to integrate a CO2 NDIR gas sensor (e.g. 0-20 Vol.-%) into the system for SO2/CO2 ratio monitoring (e.g. Marpol application). Based on the direct NO2 gas concentration measurement it is possible to substitute the costly catalytic NO2→NO converter (indirect measurement) in regular CEM/PEMS systems.

Novel CEM gas detection module for SO2 and NOx