Wind turbines have a design life of 20 years. The rotor blades must be regularly inspected at least once every four years to verify their structural integrity. This type of work is performed by industrial climbers. But the problem with inspecting offshore installations is that access is only possible when wind and weather conditions permit. This makes it very difficult to plan inspection visits.

In the Thermoflight research project, Fraunhofer scientists are working together with industrial and research partners to investigate alternative inspection methods. The use of offshore drones equipped with thermal imaging cameras in combination with acoustic monitoring systems could potentially improve maintenance efficiency and help reduce downtime. 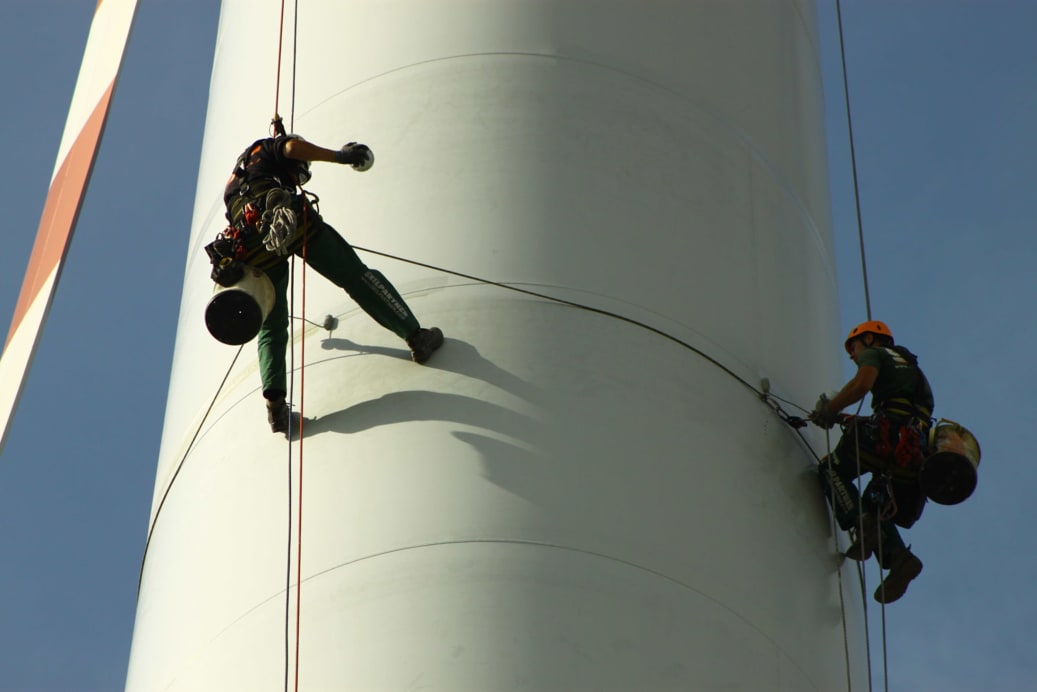 Continuous structural health monitoring (SHM) of rotor blades contributes significantly to the overall cost-efficiency of wind energy turbines. When the rotor is turning, the blade tips can reach a speed of 300 to 350 km/h – as fast as a Formula-1 racing car. Rotor blades deliver their best aerodynamic performance when the boundary layer of wind flows smoothly over the airfoil without causing wake effects. Even the slightest surface damage can generate turbulence, resulting in lower efficiency. For a wind turbine, this means diminished output, less cost-effective operation, and a shorter service life.

The extreme conditions out at sea cause materials to degrade much faster than on land. Specific stress factors include greater exposure to UV radiation, high wind speeds and salt-laden air. The industrial climbers who carry out the regular inspections check for signs of delamination and other forms of damage by tapping on the structure and examining its visual appearance. The poor accessibility of offshore wind farms and the unpredictability of maritime weather conditions make it difficult to plan the deployment of maintenance teams, with a corresponding impact on operating costs. A typical example is the case in which inspection workers are repeatedly called out but then sent home again because the weather window is too short to permit high-altitude work. Wind farm operators are therefore looking for alternative structural health monitoring methods that are equally as reliable as regular inspections by industrial climbers. “What we need are flexible methods that allow wind-turbine rotor blades to be inspected in situ in a minimum of time and without long preparation, and yet still deliver results that are as reliable and conclusive as those obtained when inspections are carried out by industrial climbers,” says Dr.-Ing. Holger Huhn, director of research and development at WindMW Service, the company coordinating the project.

These issues are being addressed in a concept study by researchers from the Fraunhofer Institute for Wind Energy and Energy System Technology IWES in Bremerhaven together with WindMW Service GmbH, the Bremen Institute for Metrology, Automation and Quality Science (BIMAQ), and Deutsche WindGuard Engineering GmbH. In two parallel approaches, their goal is to reduce wind turbine downtime and perform maintenance with fewer personnel. One approach involves the use of drones in combination with mobile thermography technology; the other employs an acoustic emission monitoring system. The acoustic emission measuring system integrated in the rotor blade serves as an early warning system by detecting internal damage, for example at the root of the rotor blade. The thermal imaging camera, on the other hand, detects surface damage, such as that caused by rain erosion. Fraunhofer IWES is optimizing the non-destructive acoustic emission monitoring system for the inspection of rotor blades. Acoustic emission and piezoelectric sensors are attached to the inner surface of the rotor blades in structurally relevant areas – especially at known weak points. The measurement computing device that collects and analyzes the sensor data is integrated in the rotor hub. 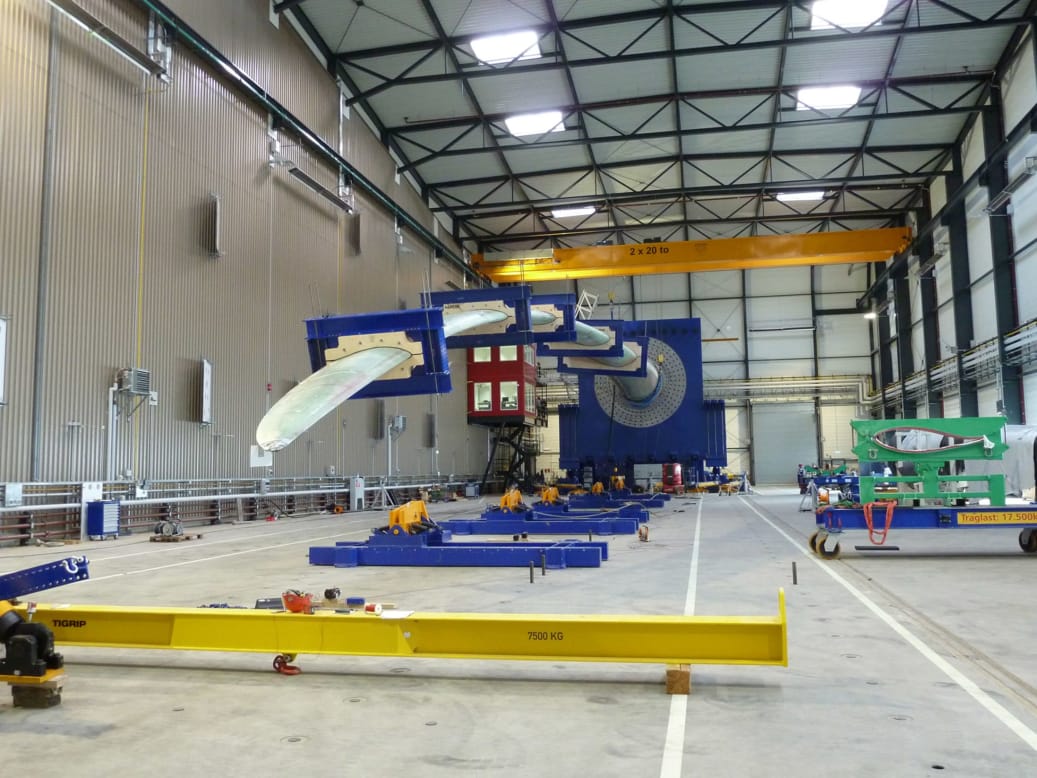 “The sensors work in much the same way as microphones. If the tensile forces in a specific area of the rotor blade suddenly change, the structure releases energy in the form of heat and surface waves that can be measured by the sensors. The sound waves captured by each sensor have different signal delays. By analyzing their arrival times, it is possible to pinpoint the source of the damage,” explains Stefan Krause, project manager at Fraunhofer IWES. The acoustic emission measuring system has already delivered convincing results during lab tests in the institute’s rotor-blade testbed facility. During static rotor blade and fatigue tests, the researchers were able to identify numerous types of damage including adhesive and inter-fiber fractures, damage to web-flange joints, cracks in the trailing edge of rotor blades, and faulty bonding in the blade root area. The next step is to test the system under real-life conditions. These tests will be carried out in the spring of 2018 in the Meerwind Süd and Meerwind Ost offshore wind parks off the coast of Helgoland in northern Germany.

The acoustic emission measuring system is an efficient and reliable means of continuously monitoring very large structures. As soon as the sensors detect and localize a potential defect, appropriate measures can be initiated. Depending on the type of damage and its location, a closer, external inspection of the rotor blade could, for example, be carried out using a thermal imaging camera.

Structural defects cause friction which in turn generates heat. The heat flow in the material can be detected by means of thermal imaging. In this project, a passive thermography technique is employed in which heat flow measurements are based on the intrinsic heat of the object under test or on differences in temperature due to the natural diurnal cycle. Deutsche WindGuard Engineering GmbH and BIMAQ have been successfully applying thermal surveying to visualize heat flow in operating onshore wind farms for several years. The new challenge is to adapt this proven technique to the requirements of offshore installations.

By attaching thermal imaging cameras to drones, it is possible to detect subsurface defects in composite materials, including delamination, inclusions, faulty bonding in the loadbearing web-flange joints, and shrinkage cavities. Under operational load, such defects deep inside the rotor blade, if not detected and dealt with in good time, can provoke more serious structural damage and eventually lead to a total breakdown. “Our aim is to combine different test methods so that such damage is detected sooner, thus avoiding the need for emergency shutdowns. It also allows operators to carry out targeted rotor blade inspections,” says Nicholas Balaresque, CEO at Deutsche WindGuard Engineering GmbH.

Deutsche WindGuard Engineering GmbH has already successfully completed initial lab tests of the thermography system. The next step is to choose the most suitable camera system and type of drone. As part of the tests to validate the concept of using thermal imaging for the structural health monitoring of rotor blades, evaluation algorithms are being developed on the basis of additional measurements being carried out at the University of Bremen’s wind energy research facility. To complement this work, offshore wind park operator WindMW Service GmbH is designing application scenarios for rotor blade inspections with the aim of sustainably reducing and optimizing the number of regular inspections.

Reducing the costs of wind energy production at sea

As well as lowering inspection costs, the new combined method promises to increase energy yields by reducing downtimes. An industrial climber needs a whole day to inspect a rotor. “Using drones, the same work could be done within one hour,” Krause estimates. “And a targeted inspection based on the results of acoustic emission measurements would require even less time. These new technologies, particularly in conjunction with unmanned aerial vehicles (UAVs), i.e. drones, complement traditional inspection activities by offering an efficient, safe means of inspecting rotor blades with optimized use of resources and minimum disruption of energy production.”

Image 2 – © Photo Fraunhofer IWES. Static testing of the trailing edge of a rotor blade. Acoustic emission sensors were able to detect and locate all defects.

Fraunhofer is Europe’s largest application-oriented research organization. Our research efforts are geared entirely to people’s needs: health, security, communication, energy and the environment. As a result, the work undertaken by our researchers and developers has a significant impact on people’s lives. We are creative. We shape technology. We design products. We improve methods and techniques. We open up new vistas. In short, we forge the future