Ammonia (NH3) emissions in Europe have fallen since 1990, but not as much as emissions of other air pollutants tracked under an internationally agreed United Nations Convention. According to a European Environment Agency (EEA) report published today, ammonia emissions increased in 2015 and several European Union Member States as well as the EU as a whole exceeded their respective NH3 emission limits under the Convention.

The annual European Union emission inventory report 1990-2015 under the UNECE Convention on Long-range Transboundary Air Pollution (LRTAP) shows that NH3 emissions fell by 23 % between 1990 and 2015, but increased in the EU-28 between 2014 and 2015 by 1.8 %. Greece did not report any data for 2015. Ammonia emissions increased most in France, Germany and Spain. Four Parties to the Convention (Germany, Spain, Sweden and the EU) exceeded their NH3 ceilings in 2015. 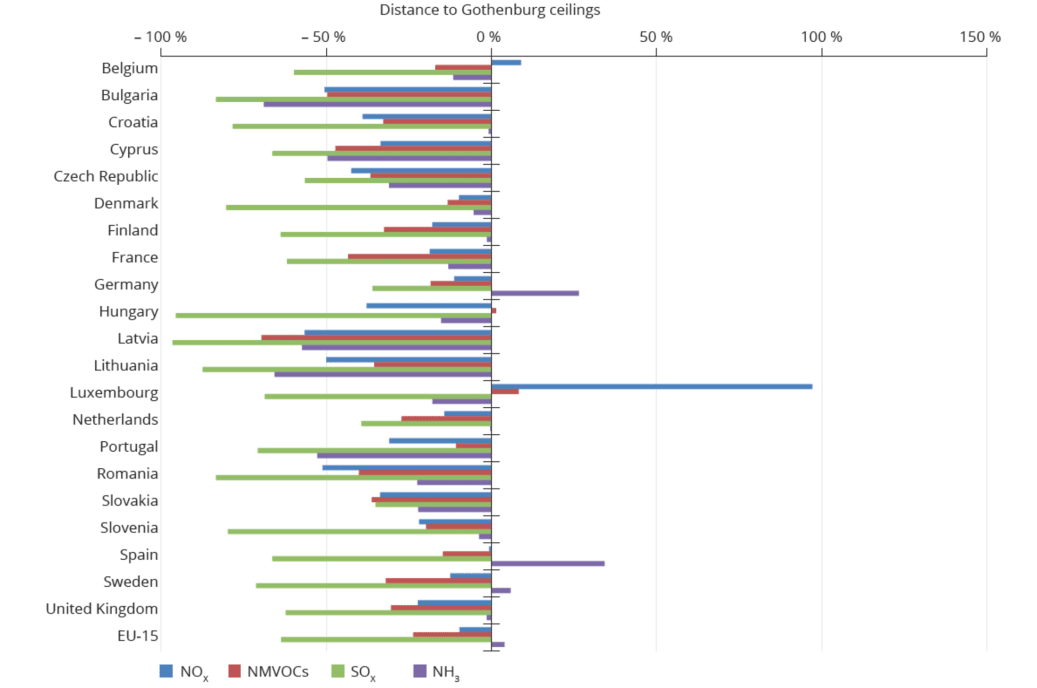 Notes: Estonia and Malta have not signed the Gothenburg Protocol and therefore do not have ceilings. Austria, Greece, Ireland, Italy and Poland have a ceiling, but they have not yet ratified the protocol. For Spain, data for emission comparisons exclude emissions from the Canary Islands.

The comparison with emission ceilings is based on reporting on the basis of fuel sold, except for Belgium, Lithuania, Luxembourg, the Netherlands and the United Kingdom. These countries may choose to use the national emissions total calculated on the basis of fuelused in the geographic area of the Party as a basis for ceilings comparisons instead (UNECE, 2014a). For the EU-15, the comparison is based on fuel sold, except the data from the United Kingdom, as this Member State did not provide data based on fuel used.

Under the Gothenburg Protocol, the EMEP Steering Body accepted inventory adjustment applications for emissions from Belgium, Denmark, Finland, France, Germany, Luxembourg and Spain in 2014, 2015 and 2016. This figure takes these adjusted data into account.

The EU-15 did not apply for adjustments and thus data for the EU-15 are unadjusted.

The other main pollutants covered by the LRTAP Convention have dropped considerably since 1990, including the three air pollutants primarily responsible for the formation of ground-level ozone (O3). Carbon monoxide (CO), non-methane volatile organic compounds (NMVOCs) and nitrogen oxides (NOx) were reduced by 68%, 61 % and 56 % respectively.

Around 94 % of ammonia emissions in Europe stem from agriculture, mainly from activities such as manure storage, slurry spreading and the use of inorganic nitrogen fertilisers. Ammonia contributes to eutrophication — an oversupply of nitrogen — and acidification of ecosystems. It also forms particulate matter in the atmosphere which has adverse effects on human health.

The Gothenburg Protocol to the LRTAP Convention aims to limit and, as far as possible, gradually reduce and prevent air pollution. It sets emission ‘ceilings’ or limits for a range of air pollutants that have to be met from 2010 onwards. In addition to ceilings specified for individual countries, the protocol also specifies ceilings for the EU-15, i.e. for the Member States that were members of the EU when it was signed in 1999. The protocol was amended in 2012 with new emission reduction commitments for 2020 and beyond. The EU-28 is in the process of ratifying the amended protocol. The EEA assists the EU by preparing the emissions inventory to be reported under the LRTAP Convention each year.