Previously, the only control technologies routinely acceptable to the USEPA were vapour phase adsorption and thermal incineration, including flares, which are expensive both in terms of initial capital and operationally, and generate high carbon footprints. The regulations do, however, allow the implementation of an alternative control device (ACD), which is subject to 98% benzene or 95% VOC removal and specified operating and monitoring conditions.

Innovative protocols have been developed by ENVIRON and Marathon Petroleum Corporation (MPC) in Garyville, Louisiana, to certify an ACD that is cost effective and has a minimal carbon footprint.

This benzene biodegradation system was approved in writing by the State of Louisiana and accepted by the USEPA Research Triangle, North Carolina. One of these integrated systems is now approved as enhanced biodegradation units (EBU) and ACDs for treatment of benzene under BWON criteria.

Following these approvals there is potential for any properly designed and operated activated sludge system to be qualified as an ACD when developed following these protocols.

Marathon Petroleum Corporation (MPC) Garyville, Louisiana Refinery This project demonstrated the development of protocols for the certification of an ACD for benzene biodestruction using an existing activated sludge system.

Constructed in 1976, the MPC Garyville refinery was the most recent grass roots refinery built in the United States. It currently complies with the six megagrams/year (Mg/yr) ‘treat to target’ option under BWON (section 342e – 2i), which requires: • Total benzene mass in all uncontrolled aqueous wastes are less than 6Mg/yr benzene • All organic wastes are controlled

MPC Garyville had already installed an activated carbon system when the refinery was approached regarding a payback on the carbon, using biodestruction in the existing integrated biosystem.

The deeper bioreactors and low surface area indicated some integral systems could also be utilised effectively for high efficiency treatment for regulated biodegradable VOC constituents. MPC Garyville therefore offered support to evaluate the feasibility of certifying one of these such integral systems as an ACD for the biotreatment of benzene, subject to BWON regulations.

Under BWON regulations, an ACD must be used to reduce benzene emissions from these sources by 98%. Current approved controls are thermal oxidisers and vapour-phase activated carbon. The regulations also allow for an ACD, provided that certain performance and operating guidelines are followed.

Specifically, Title 40: Protection of Environment: 40 CFR section 61.340 also states ‘other’ control devices can be used provided that certain conditions are met, including that:

• The owner or operator shall develop test data and design information that documents the control will achieve an emission control efficiency of either 95% or greater for organic compounds, or 98% or greater for benzene

Furthermore, the owner or operator shall identify:

• The range of values of these operating parameters, which ensure the emission control efficiency specified in paragraph (a)(2)(iv)(A) of the aforementioned regulation is maintained during operation of the device

This approach is based on utilising existing biotreatment facilities for biodegradation of benzene and other regulated VOCs, rather than more expensive activated carbon and thermal oxidation. The capital costs for implementation will be very low, simply piping and proper conveyance from the sources to the biotreatment facility.

Table 1 presents the economics of the common control devices and the preliminary ACD projections for MPC Garyville.

Table 2 presents the impact of energy and carbon footprint on the currently approved control devices by US EPA.

Ideally, the ACD should be an existing biotreatment facility, and more specifically, an activated sludge system.

In order to achieve the required 98% benzene biodestruction, the ACD must be configured to thoroughly mix and adequately aerate, disperse and transfer the benzene from the gas phase to the liquid phase for microbial assimilation.

This objective is evaluated by developing a site-specific predictive model, which allows evaluation of significant parameters to determine the most effective operation of the system. Additionally, each system must be qualified using site-specific criteria.

Due to the unique nature of this project and the request to use a modification of USEPA’s methodology to demonstrate a reliable and realistic benzene biodegradation rate, it was decided to coordinate and interface with both the USEPA office of air quality planning and standards – research triangle park, North Carolina, and the Louisiana Department of Environmental Quality (LDEQ).

1. A preliminary feasibility estimate of performance and economics of utilising the existing activated sludge system as an ACD.

2. Confirmation that the integrated activated sludge process at Garyville is thoroughly mixed and aerated properly in an enhanced biodegradation unit (EBU).

3. Development of a site-specific model for accurately predicting benzene biodegradation.

Items 1 and 2 have been discussed above. Items 3, 4 and 5 are discussed below.

The preliminary modelling results are then examined for limitations of the system and desired operational flexibility. The benzene destruction efficiency can be improved by lowering the airflow rate, which reduces stripping, and/or by increasing the biomass concentration, which increases the mass rate of benzene biodestruction. The WWTP operators did not, however, want to vary from current operational protocols, so it was decided that a benzene biodestruction rate of greater than 6.5 would be required in order to maintain current operational criteria, e.g. airflow of 3,200 standard cubic feet per minute (SCFM) and mixed liquor suspended solids (MLSS) of 3,000 mg/L.

Preliminary modelling results showed that a minimum benzene biodegradation rate of 6.5 L/g MLVSS-hr is required to achieve 98% gaseous benzene removal in the current operating conditions. If the air flow rate is <6 L/gm-hr, a system will require lower air flow rate and/or higher mixed liquor volatile suspended solids (MLVSS) concentrations; however, neither option is desirable for operational protocol on site. Operators wished to remain at 3,200 SCFM and 3,000 gm/L MLVSS.

The USEPA offers five experimental methods for determining the fraction or rate of benzene biodegradation. Due to the very low inlet and assumed outlet benzene concentrations, the laboratory BOX test method was chosen.

At only two litres, the BOX test apparatus suggested by USEPA was considered too small in volume and it was felt that more precise rates could be achieved in a larger volume bench reactor. A modified version of the BOX apparatus was constructed and tested, then proposed to the USEPA.

The following conclusions were taken from the BOX test and subsequent calculation procedures:

• The K1 site-specific biodegradation rate is 29.3 L/g VSS-hr at 25.8o C. This rate must be corrected to 20o C for input into certain models

The model was calibrated with the site-specific biodegradation rate:

• Final modelling at the BEST injection location (inlet to aeration blowers) and at the temperature corrected (20o C) benzene biodegradation rate, has confidently predicted more than 99% removal of benzene in the IGF and API off-gas and sumps, without modifications to the aeration system, e.g. aeration rate, and biomass concentration

• IGF and API benzene off-gases are assumed to be injected into the inlet of the aeration blowers at 3,200 SCFM total air flow to bioreactor

• The modelled benzene removals, as a function of MLVSS and air flow rate (SCFM) at 30o C (annual average at MPC Garyville)

• The final site-specific modelling of the benzene removals, as a function of MLVSS and air flow rate (SCFM) at 30°C (annual average at MPC Garyville), shows that is presented by the upper blue curve at the top of the graph. Considering that there is little variation in benzene removal over a range of MLVSS concentrations from 3,000 mg/L to 5,000 mg/L; this means that the benzene removal from the gas stream is very operationally robust

Although full scale verification of performance is optional before implementing capital improvements, it is prudent to understand the capacity and robustness of the site biosystem to benzene biodegradation before initiating the changes.

The full scale performance investigation required about one week in extremely hot and humid conditions. Five runs were made, each run requiring between eight to ten hours. Each consecutive run subjected the biomass to increasing benzene loadings, both in the gaseous and aqueous influent loading phases. The study plan was designed to increase vapour phase loadings of benzene until breakthrough of benzene in the reactor exhaust was measured.

The runs were successful, and it was concluded that >98% benzene biodegradation could be achieved at loadings up to 16 times design by the acclimated biomass, under the techniques of gas dispersion in the integrated system. The GC vapour phase benzene detection limit was less than two parts per billion by volume (ppbv) and the aqueous phase detection limit was <1 ppbv (µg/L). There was breakthrough of the vapour phase benzene emissions at an inlet benzene concentration of 482 ppbv, which is almost 35 times the maximum design inlet concentration. Even at this extraordinary loading, the effluent emission was only 13 ppbv for 97.2% biodegradation.

The BOX test and full scale confirmation testing objectives were met and benzene removal goals were achieved under maximum stress conditions at the MPC Garyville site. The methodology, protocols and apparatus developed and employed were approved by the state and federal agencies, and are compliant with 40 CFR, section 61.340, which states that:

Any properly designed and operated activated sludge system has potential to be qualified as an alternative control device when certified with the protocols herein. The approach presented here provides environmentally friendly, sustainable VOC control devices with negligible additional energy usage and a minimal carbon footprint

One such site-specific benzene biodegradation rate is 29.3 L/g VSS-hr at 26o C, or 22.6 L/gm-hr when corrected to 20o C. This provides excellent configuration and flexibility to achieve benzene removals >99% even under benzene loadings >16 times projected operating. 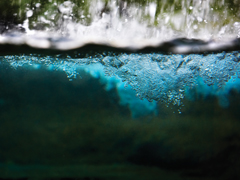