The Significance of Air Humidity

The humidity of air or gases usually influences our life completely unnoticed. And yet weather, as we know it, is not possible without humidity.

Humidity drives most of the observable weather phenomena starting with clouds via fog, rain to storms and finally to such dramatic weather phenomena as hurricanes. It is not possible to forecast the weather exactly without precise knowledge of humidity in all the layers of the atmosphere. Correct relative humidity is important for our well-being and health. An important reason for the significance of humidity in our daily life is the fact that water can exist at normal temperatures (-20 to 30°C) in all 3 physical conditions and mainly also the high conversion energy of water from one physical condition into another one. Water in the air in its gaseous state, i.e. humidity, can store very large amounts of energy and can release it again during conversion to the liquid state, rain. Due to its properties, water, as humidity in the air, stabilises our climate and prevents large extremes of temperature.

Water as part of the air

Air is a mixture of a range of gases, of which the most well-known are nitrogen (N2) and oxygen (O2). Other components are various inert gases such as argon (Ar) and helium (He), carbon dioxide (CO2) and traces of other gases. A list of the most significant components in natural air with their proportions by volume can be seen in Table 1.

There is a maximum water vapour partial pressure for a given temperature which cannot be exceeded. For explaining the matter, consider a closed container at a temperature (t) which is half-filled with water; there is air in the space above the surface of the water (see Fig. 2).

Based on the thermal energy of the water molecule, water will evaporate for as long until a partial pressure (ew) materialises in the air space above the surface of the water. This saturation pressure ew(t) is the maximum possible which can exist for a given temperature (t). Exceeding the saturation vapour pressure results immediately in condensation; while this pressure is not exceeded water is evaporated from the water surface for as long until the maximum possible saturation vapour pressure ew(t) is reached again.

Without a free water surface, a vapour partial pressure (e) between 0 and ew(t) will always materialise. The saturation vapour pressure relating to a free water surface ew(t) is only dependent on the temperature and is of core importance for all considerations about humidity. Similar considerations can also be made with regard to a free ice surface and the saturation vapour pressure above ice ei(t) is obtained for temperatures < 0°C. Very precise vapour pressure functions, which are however very complicated to handle, are found in the literature for description of the saturation condition of water vapour. Therefore, approximation functions, so-called Magnus functions, are mostly used for normal technical applications:

The Magnus functions have the important benefit that analytical inverse functions also exist. The disadvantage is that different parameter sets must be used depending on the air temperature.

The correction or “enhancement” factor (f) specifies the behaviour of humid air as compared with a system in which only water and water vapour are considered (pure phase). At ambient pressure and room temperature, f is ~ 1.004 and can thus be disregarded for most practical applications. The f-factor increases with increasing system pressure and is approximately 1.03 at 1MPa.

Quantities of humidity of air

The humidity of air or gases in general can be described in the most diverse ways which has its advantages depending on the application case. The different quantities of humidity are all equivalent and can be calculated from each of the others, whereby it is usually still the air temperature which plays a decisive role. The humidity quantities can be roughly divided into the following groups:

Basically, a few humidity quantities are enough to be able to describe sufficiently all the problems occurring in practice. The following properties are assumed:

The dew point temperature is the temperature to which humid air or gas must be cooled down with constant pressure so that condensation just starts to occur. The following equation is valid for the occurrence of condensation:

The relative humidity is generally the most well known humidity measurement quantity. The reason for this is that together with the room temperature it is the most important quantity for specifying a pleasant ambient climate and thus for wellbeing. In general the relative humidity describes moisture exchange processes of materials or also of people with their surroundings.

This definition applies to the complete temperature range, i.e. the relative humidity according to the WMO (World Meteorology Organisation) convention is also related to the saturation state with regard to water for temperatures < 0°C.

The water vapour density depends on the total pressure (p) as well as on the gas temperature (t) and is used primarily as a measurement quantity for industrial drying processes.

The specific enthalpy of humid air is basically not a humidity measurement quantity, but instead provides a measurement for the necessary energy to produce a specific humid air condition. The enthalpy is not an absolute quantity, but instead it is always stated only as energy difference from one state to another. The condition of dry air at 0 °C is the arbitrary point of origin. The specific enthalpy of humid air is derived from the total heat energy necessary in order to:

Mollier diagrams are used to enable the graphical solution of complex thermodynamic calculations. Fig. 3 shows a simple Mollier diagram as a t – r graph. Condition changes of humid air are curves in the Mollier graph, for example, a heating of humid air is a vertical straight line as the mixture ratio (r) does not change during the heating.

There are a large number of humidity measurement methods, equipment and sensors for measuring humidity. However, ultimately only a few methods and sensors have really established themselves and are available in large quantities. The description of the individual measurement methods is made without considering accuracy and system costs but rather according to historical perspectives.

The length of degreased and specially treated organic or synthetic fibres (e.g. human hair) changes with the relative humidity as a result of its hygroscopic behaviour. The maximum relative change in length can be up to 2.5%. The widely distributed and known hair or fibre hygrometers are based on this effect. They are actually the oldest hygrometers and in use to this day in countless different versions for wide temperature ranges from less than 0°C to more than 100°C.

With corresponding maintenance, psychrometers show a very good accuracy in the temperature range from 5 to 50 °C; the measurement errors increase significantly at higher and lower temperatures.

The measurement method is based on the adsorption of water vapour on a porous Al2O3 layer. The sensor is designed as a condenser and usually consists of a master electrode made of solid Al which the Al2O3 layer is applied to using anodic oxidation. A porous gold layer is arranged as the opposite electrode.

During the adsorption, the humidity-dependent capacity of the sensor changes due to the high dielectric constant of the accumulated water which represents a measure of the absolute humidity in first approximation for the sensor. The capacity change becomes smaller and smaller for low humidity; at the same time the accuracy of the measurement drops and the reaction time becomes larger and larger.

Of all the sensors available on the market for humidity measurement, the capacitive polymer sensors are by far the most successful. They are used with different designs and configuration options with great success in air conditioning technology and in the automotive industry. There are successful applications in industrial measuring technology, partly aggravated usage conditions, in agriculture and in meteorology. Extremely short reaction times at low temperatures are achieved with special design options so that usage in radio sondes at temperatures down to -80 °C is possible. 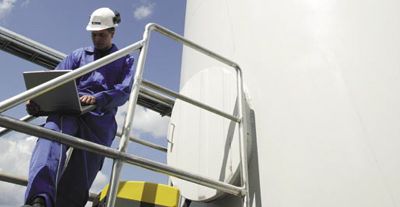 The Significance of Air Humidity