Normalisation – or corrections to data – are an often misunderstood concept when carrying out emissions monitoring, but normalisation of data is a common and necessary adjustment to ensure that valid concentrations are reported.

Stack emission monitoring can support a number of industries and sectors including: energy from waste, power generation, chemical and pharmaceutical processing.

If concentrations fail to be reported as standardised, then the comparisons made with emissions limit values may not be fully accurate. Likewise, any comparisons made with emission concentrations across different sites, or recordings made at different times, may not be reliable if normalisation did not take place. Either using continuous emissions monitoring systems (CEMS) or periodic monitoring, the sample collected and recorded must also be representative of the overall emitted stack gas.

Emissions concentrations are usually expressed as: 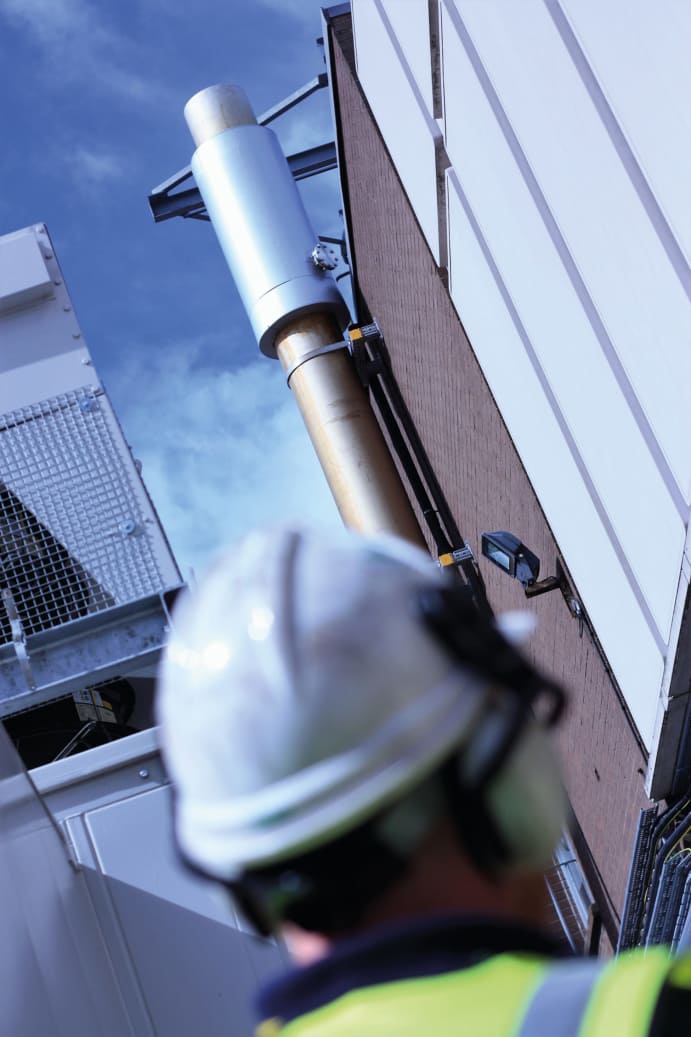 Temperature affects an emissions concentration reading due to the changes from hot to cool air. As hot air from a stack enters the atmosphere at an ambient temperature, the air cools. Cool air is denser and, therefore, has a smaller volume which will affect the concentration reported if the units used contain a volume component, i.e. mg/m3.

With this in mind, the Environmental Protection Agency’s Air Emission Monitoring Guidance Note M2 states that the correct flow and concentration value should be relative to a predefined temperature and pressure. The EA has specified that temperature corrections should use a reference temperature of 0 °C (or 273 Kelvin). This is recorded or known as Nm3.

Temperature normalisation is calculated by:

With the volume of a gas dependent on pressure, the volume of air changes in a similar way to a temperature change. When pressurised air from a stack enters the atmosphere, it expands and alters the concentration.

Pressure normalisation is defined as:

In general, the higher the actual stack pressure, the lower the normalised concentration

The presence of moisture occupies space that would, without moisture, be occupied by additional gases.

To standardise results and allow “like for like” comparisons, emissions are often reported on a ‘dry gas’ basis. This means correcting the moisture content to zero, by doing the following calculation:

Moisture normalisation is defined as:

In general, the higher the moisture content, the higher the normalised concentration. It is important to note that emission limit values can be expressed as either a wet gas or a dry gas basis. The above calculation converts the measurement of moisture content to zero, effectively recording emissions on a dry gas basis. However, if a monitoring technique has dried the gas out this correction would not be required.

An example of a process that would require moisture corrections would be a waste incinerator. The waste that is burnt in an incinerator can vary greatly and may be dry or contain a lot of water. Additional moisture can be generated within the combustion process when hydrocarbons react with oxygen to produce CO2 and H2O. The amount of water that is produced will therefore vary dependant on the composition of the waste. The amount of water in the exhaust stream will have an effect on the reported concentration if it is not removed or corrected for. 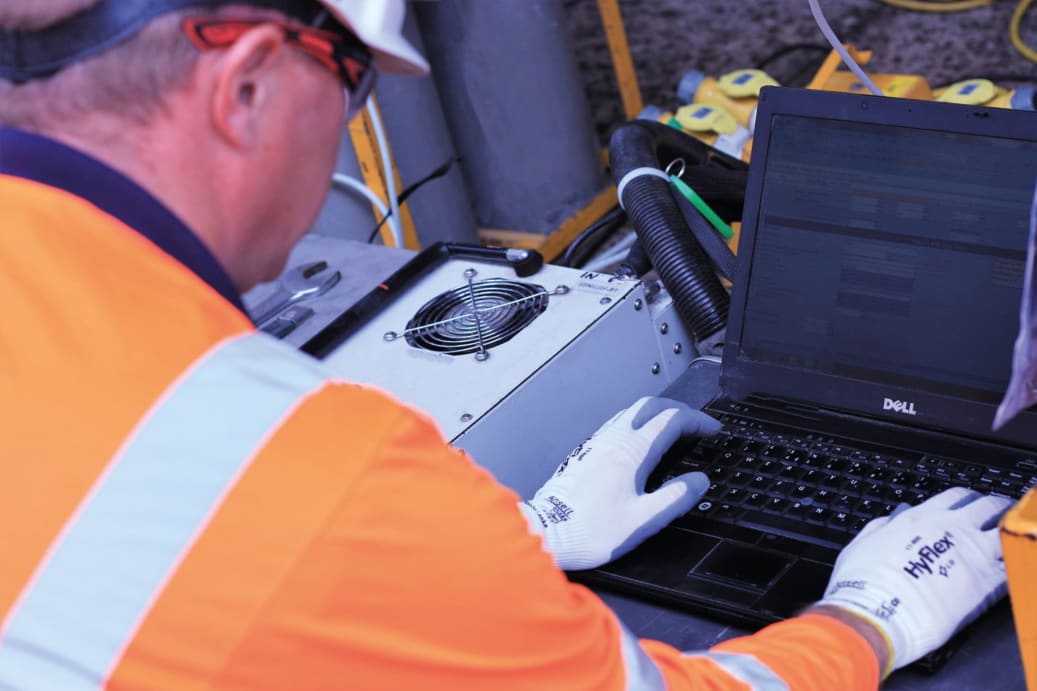 Unlike temperature, pressure and moisture, oxygen will have no effect on volume. Instead, for combustion processes, the amount of dilution air added to a process can be determined by measuring the oxygen level of the exhaust gas.

Some combustion processes will require additional air to be added for a variety of reasons, perhaps to improve combustion. The exhaust gases emitted then contain the same amount of pollutant, but this is encompassed in a larger quantity of air (because of the additional air added). By measuring the dilution of oxygen from the ‘natural level’ of oxygen, you can also calculate the level of dilution of pollutants.

Depending on the combustion process, the oxygen reference used can differ and must be appropriate to the process in question. When reporting emission data from combustion sources, the site permit may require reference oxygen conditions to be included.

The normal running conditions of the process, as well as the type of fuel used, will determine the typical level of oxygen for the process:

Where other fuels are used, oxygen references will be determined dependent on the case itself.

Recording in ppm or mg/m3?

The instrument used for measuring emissions may record in ppm (parts per million) or mg/m3 – this affects if you need to normalise for temperature and pressure.

The volume component, mg/m3, is affected by temperature or pressure, whereas the ratio of ppm does not alter or need normalising.

To better explain this concept, imagine a fixed volume of air, say one cubic metre. For simplicity let us say this volume of air is made up of one million molecules and that a molecule of SO2 weighs 2.8mg. If there were 100 molecules of SO2 in the cubic metre, this would equate to 280mg/m3. Also, 100 molecules of SO2 in amongst the million total molecules would equate to 100 ppm (parts per million). If there is an increase in the temperature of this gas, it will expand and all the molecules will move further apart. If, for example, the volume doubles, there will then be 280mg in two metres cubed, thus the concentration in mg/m3 has altered. There are, however, still 100 molecules of SO2 in a million so the ppm value has not altered.

Site permits require that emissions are reported in mg/m3. If the monitoring technique produces results in ppm, these will need converting to mg/m3.

To convert from ppm to mg/m3 we multiply the ppm result by the molecular weight of the component and divide by 22.4. The 22.4 value is the volume in litres that 1mol of gas occupies at standard temperature and pressure. Because this value is used it means that the resulting figure in mg/m3 does not require further corrections for temperature or pressure as these have already been taken into account. As an example, the molecular weight of carbon monoxide is 28. So a result of 10 ppm of CO would equate to: 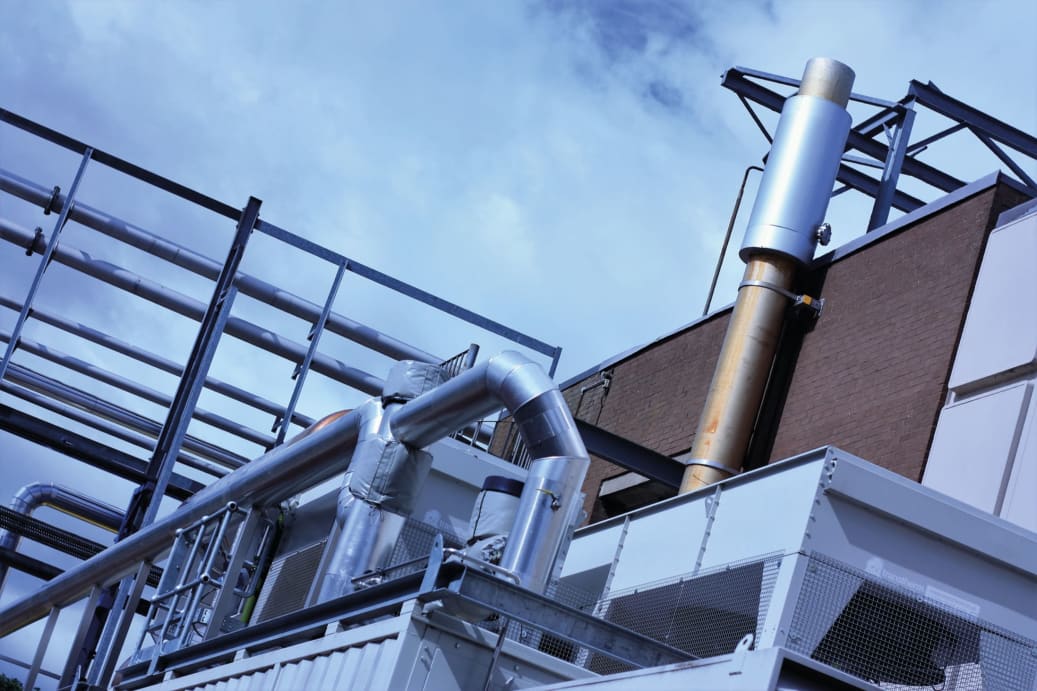 Once corrections and appropriate units have been finalised, one final calculation that is commonly performed is to convert the concentration result to a mass emission result. If we take into account the area of the stack and the velocity of the exhaust gases, we can calculate the total mass of the component that passes into the atmosphere.

The stack gas velocity in m/s (metres per second) and the stack area in m2 (metres squared) when multiplied together will give the volume of gas passing through the stack in each second (m3/sec).

If we know the mass of the component in each metre cubed (m3) as mg/m3 then we can calculate how many milligrams are emitted each second and, from there, determine kilogrammes per hour or perhaps tonnes per year.

The purpose of all these corrections and the use of defined units is to allow equal comparisons to be done across different sites using different processes and a variety of analytical techniques to measure their emissions. It would be unfair to accuse a particular site of having higher emissions just because their emissions sampling location is at a lower temperature or they use more ambient air to cool their combustion process. Normalisation of reported emissions also allows results to be added together to form a picture of overall pollutant emissions for a specific area regardless of the type of industry in operation.

Where periodic monitoring takes place on a licensed site, an independent organisation with ISO17025 or MCERTS accreditation is required to complete the works.

SOCOTEC is one of the largest established MCERTS accredited stack emissions monitoring consultancies, providing market-leading, professional and competitive monitoring and testing services throughout the UK, Ireland and internationally. 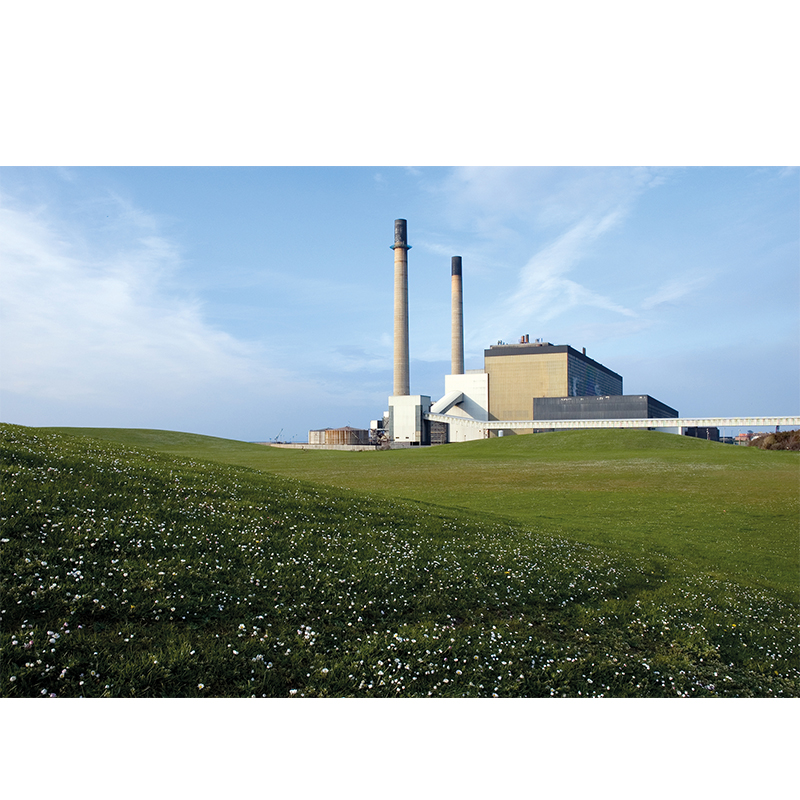