Sampling Soil From our Fragile Earth

XRF spectrometry is making a significant contribution to help Antarctica

The remediation of contaminated soils in Antarctica is conducted under the auspices of the Antarctic Treaty Committee for Environmental Protection. Scientists representing many governments are participating in the program. This article outlines the impact of human activity on the continent and provides an insight into how X-ray fluorescence (XRF) spectrometry is being used on-site by analysts from the Australian Antarctic Division, Department of the Environment and Water Resources to direct and monitor the progress of the clean-up at an old research station in East Antarctica.

Antarctica is often thought of as a pristine land untouched by human disturbance. Unfortunately this is not the case. For just over a hundred years people have been travelling to Antarctica. In that short time we have driven some Antarctic species to the verge of extinction for economic benefit, killed and disturbed others, and in some places polluted the soils and discharged sewage to the sea.

More recently, attitudes have changed and the clean air, water and ice of Antarctica are now of global importance to humanity for understanding how the Earth’s environment is changing, both naturally and as a result of human activity. In addition, governments are taking responsibility for the damage of the past and a major program of reclamation, remediation and renewal is under way.

The clean-up at Casey Station

The clean-up of the abandoned tip or waste-disposal site at Casey Station in East Antarctica represents the first step in the Australian Government’s long term commitment to remediate contaminated sites associated with the Australian Antarctic Program.

The main contaminants polluting the soil and melting water at the site were heavy metals, with Fe, Cu, Pb and Zn at g/kg concentration levels being the chief offenders.

This clean-up was undertaken by the Australian Antarctic Division (AAD), Department of the Environment and Water Resources, the government agency responsible for administering and implementing Australian activities in Antarctica. The operation, involving excavation of the waste (Figure 1), treatment of contaminated melt water on-site, and an extensive concurrent environmental monitoring program, commenced in the summer of 2003-04, after nearly a decade of research and development work by the Human Impacts Research Programme on the characteristics of the site and its surroundings, and the effects of contaminants on the environment. The aim of the clean up was to remediate the site as best as was practicable – ideally to background levels – and to leave it in a state where the dispersal of residual contaminants did not present an environmental problem.

A crucial goal of each phase of the chemical assessment carried out was achieving a fast turnaround time for the chemical analyses. This was necessary to provide the tip clean-up management team with information to help direct the progress of the excavation, and to allow proper planning of the waste remediation process back in Australia. To achieve this fast turnaround time, on-site analysis using rapid and reliable methods was essential. It was also critical in the overall chemical assessment method to find a suitable compromise between analytical data quality for the typically heterogeneous soil samples, and analytical practicality. Therefore an important criterion was minimal sample preparation, especially given that sample collection was both time- and labour-intensive (Figure 2). It was equally important, however, that the assessment was rigorous and carried out in accordance with Australian guidelines for the assessment of contaminated sites.

XRF spectrometry was the method of choice for determining total contaminant concentrations (total metals) because it is a relatively straightforward, robust technique, capable of providing a direct, rapid, multi-element analysis of soil over a large concentration range.

Hunting and fishing Hunting for whales and seals drew people to the Antarctic in the early years of the 20th century and within only a few decades caused major crashes in wildlife populations. Whaling in the Southern Ocean began in earnest in the early 1900s and grew very quickly. Declining catches motivated international attempts to regulate whaling and the International Whaling Commission (IWC) first met in 1949. In the 1960s, blue and humpback whales were fully protected; this was extended to fin and sei whales in the 1970s and in 1986 the IWC suspended all commercial whaling. Since the moratorium was initiated, whaling has been limited to one or two countries that harvest whales under the ‘scientific whaling’ provisions set by the IWC. Fishing is the only large-scale commercial resource harvest currently undertaken in the Antarctic Treaty area.

Scientific study Each year, scientists from 27 different nations conduct experiments that are not reproducible in any other place in the world. In the summer, more than 4,000 scientists operate from research stations: this number decreases to just 1,000 in winter.

Tourism Small-scale tourism has existed since 1957 and is largely self regulated by the International Association of Antarctica Tour Operators (IAATO). However, not all vessels associated with Antarctic tourism are members of IAATO. More than 26,000 tourists visited during the 2005-06 Austral summer, with nearly all of them coming from commercial ships. The number is predicted to increase to more than 80,000 by 2010. Antarctic sight-seeing flights have operated out of Australia since the mid-1990s.

A versatile, compact and portable benchtop spectrometer (PANalytical MiniPal, www.panalytical.com) was employed successfully for this purpose in the Casey Science laboratory throughout the clean-up operation (Figure 3).

Calibration of the spectrometer for Fe, Mn, Ca, K, As, Cr, Cu, Ni, Pb, and Zn, from low ppm to wt% levels, was achieved using base metal Certified Reference Materials (CRMs), and analyses were performed on loose powders prepared from the <2 mm dried soil fraction. This simple sample preparation scheme was chosen after favourable comparison with data obtained for pressed disks prepared from finely milled soil fractions. It provided a sample that was sufficiently homogeneous for accurate and reproducible analysis, within the constraints of the data quality required. Measuring duplicate loose powders from a single soil sample (better than 10%) was found to be statistically equivalent to the precision of duplicate measurements of a single loose powder sample or standard.

Other aspects of analytical QC were assessed by regular measurement of three of the calibration CRMs, together with two site specific standards: a contaminated Casey tip fines, and an uncontaminated Casey background soil. Reproducibility of the XRF instrument over a period of nearly three months averaged 8±5% for the ten metals, and the mean deviation of QC measurements from certified values was 10-40%, depending on the metal and the concentration range (greater deviation at lower concentrations). Satisfactory accuracy of the XRF method for tip soil samples was confirmed by the analysis of a subset by acid-digestion/ICP-OES in Australia. Figure 4 shows the correlation between data for Pb.

Correlation is poorest for clean soil samples with low total Pb concentration because, unlike contaminated soils, a large proportion of the total Pb is hosted in naturally occurring minerals not readily digested by aqua regia, and thus cannot be measured by ICP-OES. A similar pattern was observed for Cu and Zn.

During the Casey tip clean-up operation, more than 200 individual soil samples were collected and analyzed for total metals by XRF using the MiniPal spectrometer. The chemical assessment data were used to classify approximately 1000 tonnes of waste soil for disposal and validate the satisfactory clean-up of the greater part of the tip site.

XRF will continue to be used in completion of the Casey tip clean-up, and will be an important tool for chemical assessment work during the investigation and remediation of other contaminated sites, such as the nearby abandoned station at Wilkes.

As the world cleans up its act in Antarctica, XRF spectrometry is making a significant contribution. The work completed at Thala Valley by the Australian Antarctic Division has shown that XRF is a rapid, accurate method that can be used reliably in the field. Simplifying analytical techniques in this way is an important step in improving the efficiency of the ongoing chemical assessment program.

Thanks to Damian Gore for his assistance in preparing this article. 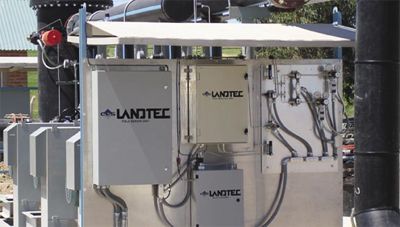 Sampling Soil From our Fragile Earth