Rising to the Challenge of a ‘Buy Quiet’ Campaign

A new international initiative to encourage industry to purchase quieter tools and machinery highlights the benefits of using machines that are quiet by design, rather than installing noise control treatments retrospectively. But what can machinery manufacturers do to reduce the noise emissions of their products?

Noise is an inevitable byproduct of most industrial processes. The aim of low noise design is to reduce the noise output of machines without making them less efficient for their primary purpose. This constraint is one of the primary difficulties with noise control – it is easy to make an aircraft quiet, providing it doesn’t have to take off with a full complement of passengers!

The aircraft and motor industries invest large sums of money in optimising their products with noise as one of the design constraints, and have teams of specialist acousticians who continually push the limits. But noise control for many other industries progresses on a far more ad-hoc basis if noise becomes unacceptable for some reason, such as an increase in machine power or a reduction in weight or cost.

Noise control at source is the best option, and understanding why machines make noise is the key to including it in the design process of the machine.

Control of workplace noise has made significant progress over the past 40 years, with standard declaration of noise output from machines now in place and the implementation of secondary noise control measures such as enclosures now enforced.

Hearing defenders should not be used as a substitute for noise control of the machine itself; secondary controls are far less effective than control at source – they add to costs, reduce productivity and, crucially, are easy to neglect or remove.

Hence the ‘Buy Quiet’ initiative is being joined by health and safety organisations from around the world, including the Health and Safety Executive (HSE) in the UK, and a recent meeting of the Institute of Noise Control Engineering (INCE) in Paris highlighted the growing strength of the campaign.

A low noise machine should remain low noise throughout its useful life and so ultimately represents the most cost effective solution to the control of workplace noise, and the reduction in environmental noise pollution.

The crucial aspect of low noise design is to identify the dominant noise sources and to understand the physical mechanisms that control the level of those sources. Sources should be ranked according to their contribution to the A-weighted sound pressure level and the simple example in Table 1 shows the importance of accurate ranking.

Suppose that a machine has two sources of noise, a dominant source A and a secondary source B. The logarithmic nature of decibel addition (inset) means that if the sources have a level of 70 dB(A) and 60 dB(A) respectively (case 1), the total noise is completely dominated by source A and the overall level, rounded to the nearest decibel, is also 70 dB(A).

It is also worth noting that reducing source B has virtually no effect on the overall level.

In the second case shown, the baseline situation is that the two sources have levels of 69 dB(A) and 65 dB(A); the overall level is again 70 dB(A). While source A is still very dominant, the effect of reducing it by 10 dB is to only reduce the overall level by 4 dB.

This example shows how the success of low noise design is very dependent on not only identifying what the primary sources of noise are, but also on identifying the relative level of secondary sources. Achieving only 4 dB of noise reduction when 7 dB was anticipated can be costly.

Identifying and ranking sources of noise

Noise is produced whenever there are time varying forces acting, which may be either mechanical in origin or may be due to unsteady fluid flow or combustion. In practice, most machines comprise many more than two sources, and indeed it may be difficult to identify what is a true ‘source’ and what is part of the transmission path.

Considering the example of a diesel engine, the primary source of excitation is the explosion inside the combustion chamber, but the energy from that event propagates out through the engine and is ultimately radiated as noise by the vibrating external surfaces of the engine. There are also many secondary time varying mechanical forces from fuel injectors, gears, bearings or piston slap.

Identifying the potential sources is normally a simple process of thinking through the mechanics of the machine, although there are always exceptions – in the case of the diesel engine the piston slap might easily be missed, as it is not a key part of the engine operation.

An engine running at 3,600 RPM produces noise at 60 Hz due to out-of-balance forces but, for a 4-cylinder 4-stroke engine, multiples of the 120 Hz firing frequency are likely to dominate

• Frequency analysis during a run-up: Where a machine can be run over a range of speeds the resulting noise or vibration spectra can be plotted as a spectrogram showing noise level versus frequency and speed. The engine orders (multiples of rotational frequency) show up as sloping lines, and resonances associated with the response of the structure show as fixed frequency vertical lines. Where an engine order passes through a resonance there is a peak in noise output at that frequency

• Time domain analysis: For non-rotating machines it is often preferable to work with time histories of noise rather than frequency spectra. Individual noise events can be related to machine operations, taking into account time delays in sound propagation. For some machines that rotate slowly, such as wind turbines, it may be useful to consider the variation of frequency spectra with time

• Vibration mapping: Noise radiation from a surface is directly related to its level of vibration through the equation:

• Other methods: There is a whole armoury of other methods of source identification, ranging from obvious techniques such as operating sources individually, through to sophisticated noise path analysis, modal analysis and spectrum enveloping methods

Considering the diesel engine example, where in the sound transmission path map is it convenient to define the sources and where can noise control most easily be implemented? There is clearly no simple answer to this question, but a number of possibilities are apparent:

1. Force pulse tailoring: • Combustion forces may be modified by adjusting the chamber shape, injection timing or air-fuel ratio • Piston slap can be altered by component design • Timing gear forces can be altered by gear design

Although gantry cranes do not usually require reduction to protect employee hearing, they can cause environmental noise problems as cranes are very visible, elevated sources. In the case considered here more than 15 dB of noise reduction was required with only a limited increase in weight since it was important not to restrict the lifting capacity of the crane.

The mechanical origin of the noise is the lifting machinery, which generates discrete frequencies at motor and gearbox running speeds. The first step in noise control was to rank order the airborne noise, which is radiated directly from the surfaces of the machinery, and the structure-borne noise, which is radiated from the working platform of the crane. Initially, noise levels in the environment were found to be dominated by the airborne path, and this was tackled by an enclosure around the machinery, though noise control at source could also have been considered. However, a major component of structure-borne noise limited the benefit of the enclosure.

This was much harder to deal with for several reasons:

• Damping the massive steel structure of the platform would be heavy and costly, and would only work at resonance

An important consideration in reducing the residual structure-borne noise lay in quantifying the relative contributions of different parts of the structure, such as the main support beams of the platform and the floor panels between the beams.

Sound intensity mapping was not possible on the underside of the platform, and so the vibration mapping technique was used. A number of point measurements were made using accelerometers that could be installed from the platform, and the space average vibration levels were used to estimate the sound power radiated from various parts of the structure.

The vibration mapping showed that the floor panels were the dominant radiators of noise and the solution to the problem became apparent. By cutting out the solid decking and replacing it with a porous walkway, the sound power radiated from the platform was reduced, primarily because the radiation efficiency of the porous walkway was much less than that of the original solid deck.

However, there was also a weight saving and this additional allowance was sufficient to allow an enclosure to be fitted to the underside of the platform to prevent sound radiation from the support beams. This also closed off the airborne noise path that resulted from opening up the deck.

The overall result of this major structural change was a noise reduction of more than 15 dB with no net increase in weight beyond that of the original enclosure.

The Buy Quiet campaign is based on the fact that changes can and should be made to equip factories with quieter machinery, the intention being that pressure from purchasers will encourage suppliers to respond with improved designs.

Increasing the importance of noise as a factor in the design of a machine does not mean sacrificing other criteria such as operating efficiency or other safety aspects. Indeed the earlier that noise is taken into consideration, the lower the likelihood that costly and difficult remedial noise control measures will be needed.

The example of the crane illustrates how the key to achieving significant noise reductions is a good understanding of the noise source mechanisms and transmission paths, and an accurate ranking of the contributors to the overall noise levels. 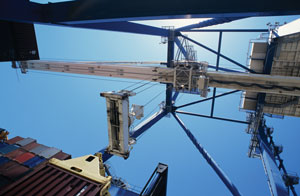 Rising to the Challenge of a ‘Buy Quiet’ Campaign