Powering the Nation On Landfill Gases

The transformation of waste management

From their initial creation to strictly controlling Directives, Rid Hollands gives us an insight into landfill gases.

The UK produces approximately 75 million tonnes of household (municipal), commercial and industrial waste a year – roughly 200,000 tonnes per day. In much the same vein as Bob Dylan’s song, The Times They Are A-Changin’, so too is the waste and resource management industry.

In part, the changes to the way in which waste is managed are thanks to the EU Council Directive 1999/31/EC on the landfilling of waste, which imposed implementation of the legislation on member states in 2001. The Directive’s objective was to prevent the negative effects on the environment from the landfilling of waste, by introducing a series of stringent technical requirements for waste and landfills.

Effectively the main requirements of the Directive are as follows: • Sites are classified into hazardous, non-hazardous or inert categories, according to the type of waste they receive • Higher engineering and operating standards are required • Biodegradable waste was progressively diverted away from landfills from 2001 until 2020 • Hazardous liquids, flammable, corrosive, explosive, oxidising and infectious wastes have been banned since July 2002 • Non-hazardous liquids were banned between 2004 and 2007 • Co-disposal has been banned since July 16, 2004 • Whole tyres have been banned since 2003 and shredded tyres have been banned since 2006 • Waste is required to be pretreated prior to landfilling • Operators must demonstrate that they and their staff have the technical competency to manage the site and have made adequate financial provisions to cover the necessary maintenance and aftercare requirements • Hazardous waste has been pretreated since July 16, 2004 • Waste Acceptance Criteria was implemented in July 2005

This Directive’s stringent requirements and banning of certain materials have helped to divert waste away from landfill; however, this is not the sole piece of legislation that has helped to achieve this. Landfill tax and the landfill tax escalator have been central to this change, with the Finance Act 1996 (the primary legislation on landfill tax) and the Landfill Tax Regulations 1996 dealing with all aspects of the tax.

Effectively, by increasing the costs of landfill in a uniform and predictable way, landfill tax policy has encouraged the waste and resource management industry to invest in a range of alternative treatment facilities for recycling and recovering value from waste. Since 2000, this has helped to halve the amount of UK waste going to landfill.

Further to this, Directive 2008/98/EC on waste, also known as the Waste Framework Directive, is a handy ‘rule of thumb’ which sets out options for dealing with waste in order of preference, to: • Reduce the amount of waste arising in the first place • Reuse waste material • Recycle • Recover energy from the waste • Dispose of waste in landfill

These points are often presented as a pyramidal or hierarchical structure to enable ease of reference, as seen in Figure 1.

With this framework in place, waste management companies have the confidence to invest in infrastructure that can help lessen the 24 million tonnes of all waste which is still landfilled each year, including almost half of all municipal waste.

There are some encouraging signs that the amount of waste we produce as a country has slowed or ended its long term rise; however, there is no doubt that we will be creating tens of millions of tonnes of rubbish for many years to come, much of which will still be landfilled, which of course leads to the creation of landfill gas.

Stage one of the process involves the consumption of any oxygen present within the waste, primarily by aerobic microbial activity. This process mainly results in the evolution of carbon dioxide gas, water and heat.

Providing there are no sources of air ingress to the waste to replenish the oxygen consumed at this stage, then the concentration of oxygen will reduce. Nitrogen levels will also decay as the gases produced purge it out from the waste mass.

Stage two of the degradation process involves the conversion from aerobic to anaerobic conditions within the waste mass. The result of this process is the production of ethanoic acid (acetic acid), ethanoates (acetates), ethanol, ammonia, carbon dioxide, hydrogen, water and heat. The hydrogen and carbon dioxide produced during this process continue to purge the remaining nitrogen from the atmosphere within the body of the waste.

Stage three of the degradation process is where the methanogenesis process commences with methane and carbon dioxide being produced. During this period the hydrogen levels peak, as do the Chemical Oxygen Demand (COD) and Total Volatile Acid (TVA) concentrations in the leachate.

Stage four is where a period of equilibrium is reached in the degradation process. The conditions present in the body of waste provide a steady state condition during which methane and carbon dioxide are evolved in a ratio of typically 3:2 (60:40%) by volume. This period can extend for many years, until the organic compounds in the waste mass are converted to gas.

Stage five represents the final stage of the degradation process during which the gas composition within the body of waste gradually assumes that of atmospheric air.

The changing concentrations of the composition of landfill gas, as defined in the above five stages, is neatly surmised in Figure 2, as adapted from Farquhar and Rovers, 1973.

As Figure 2 indicates, there are numerous gases associated with landfill gas; however, landfill gas is chiefly made up of two main components – methane and carbon dioxide.

The composition of the landfill gas varies from one landfill site to another, and within a landfill site, from one cell to another. The make up of the gas composition will change with time, the changes of which can be attributed to: • Waste composition – in particular the amount of readily degradable organic material • Age of tipped waste • Density of the emplaced waste • Moisture content and its distribution through the waste mass • Acidity or alkalinity (pH) and the nutrient availability (to feed the microbes) • Temperature • Presence of toxic agents and chemical inhibitors

As more and more organic material is diverted away from landfill and towards other methods of disposal, such as composting and anaerobic digestion, the composition of landfill gases will change with time. As long as a putrescible content remains, bulk gases will essentially remain in the same ratio; however, the presence and abundance of specific trace gases will change.

According to government estimates, landfill sites in England and Wales produce almost 3% of the United Kingdom’s greenhouse gas emissions; however, when landfill gas is captured and used as a biogas to fuel engines or turbines to generate electricity, it is a useful and significant renewable energy source for the UK.

In some countries the gas is cleaned to pipeline quality or used as a vehicle fuel. Even in the UK a member company of the Environmental Services Association (ESA) has successfully managed to produce a liquid biomethane (LBM) fuel from landfill gas which is being used to power their vehicles.

While generally at landfill sites gas is extracted and used in the generation of electricity, by converting the gas into LBM fuel it has significant sustainability advantages compared with other fuel alternatives; for example, five million litres of fuel is sufficient to power up to 150 heavy goods vehicles, or up to 400 light goods vehicles. Used as an alternative to diesel, this could save 15,000 tonnes of carbon dioxide per year.

According to the Department of Energy & Climate Change (DECC) who produce a Digest of United Kingdom energy statistics, also known as DUKES, the combined generation from the variety of different bioenergy sources accounted for 38% of renewable generation, with landfill gas accounting for almost two fifths of the bioenergy generation, or approximately 15% in 2011.

Also according to DUKES, the total electricity generation from renewables in 2011 was 34,410 Gigawatts per hour (GWh), of which landfill gas generated 4,979 GWh, behind only onshore and offshore wind and just behind large scale hydropower. Despite the decline in landfilling waste the production of electricity from landfill gas remains strong, largely due to improved techniques for the capture and efficient use of landfill gas.

A substantial opportunity for decarbonisation of the energy supply could be realised if landfill gas systems were operated in a combined heat and power (CHP) mode. Several of ESA’s members are actively working on schemes to distribute such heat; however, the financing for infrastructure to deliver hot water for district heating projects, for example, has been heavily influenced by a presumption of eligibility in the Renewable Heat Incentive (RHI).

Furthermore, in 2002 the Renewables Obligation came into effect which originally awarded 1 ROC (Renewables Obligation Certificate) for each Megawatt per hour (MWh) of renewable electricity generated. In 2009, banding was introduced which slashed this for landfill gas schemes to 0.25 ROCs/MWh. Future projects may stagnate until a scheme exists that incentivises landfill gas infrastructure.

The waste management industry has also been working with its regulators, such as the Environment Agency, the Scottish Environment Protection Agency (SEPA) and the Northern Ireland Environment Agency (NIEA), to help define appropriate regulation for the sector and methods to best maximise the capture of landfill gas. This process is ongoing, and the waste management industry continues to seek further increases in the capture of landfill gas and the resultant production of green electricity. 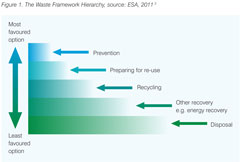 Powering the Nation On Landfill Gases