A group of Finnish and international researchers have found that interaction between plant roots and fungi governs stabilization of carbon in the soil. The researchers investigated the mechanisms behind soil organic matter formation and decomposition in boreal forests focusing on plant–soil–microbe synergies and biochemical interactions between microbial and plant inputs.

“The studies confirmed our hypothesis that tannins, abundant plant polyphenolics, and chitin, a polymer present in fungal cell wall, are involved in stabilization of fungal necromass that is highly abundant in soils,” says the lead author of the papers, Dr. Bartosz Adamczyk from Luke. “Furthermore, the field experiments showed that plant roots promote a different soil nitrogen economy with higher concentrations of organic soil nitrogen compared to inorganic soil nitrogen. Taken together, these findings provide a novel framework on how plant roots affect soil organic matter decomposition and stabilization.”

The need to understand the mechanisms behind carbon stabilization into slowly cycling pools has become urgent due to the threat of climate change. A major part of global carbon pool is stored belowground in boreal forests, mainly in soil organic matter. However, the mechanisms of soil organic matter transformations, i.e. decomposition and stabilization have not been well identified nor yet described in Earth System Models used to estimate global climate change.

“Until now, researchers have focused mostly on plant litter input, the role of soil microbial communities on its decomposition, and on the effects of allocation of plant photosynthates to soil that may induce organic matter decomposition,” says Doc. Jussi Heinonsalo from the University of Helsinki. “Our research elucidates the role of plant-derived active biomolecules that interact with microbial necromass to create stabile soil organic matter. This pathway adds a new piece in the puzzle of understanding the highly complex soil carbon cycling and highlights plants’ active role also in soil organic matter formation and stabilization.”

The findings are part of the work done in NITROFUNGI project and have been published in Nature Communications and in New Phytologist. Coordinated by Dr. Heinonsalo, the NITROFUNGI project was funded by Academy of Finland as an Academy research fellow project. The research was conducted by the University of Helsinki and Natural Resources Institute Finland (Luke) in cooperation with the Institute for Atmospheric and Earth System Research (INAR), Finnish Meteorological Institute (FMI), University of Vienna (Austria) and University of Eastern Finland.

Researchers and specialists working in Luke provide new solutions towards the sustainable development of the Finnish bioeconomy and the promotion of new biobased businesses. Together with our partners we will build a society based on bioeconomy. 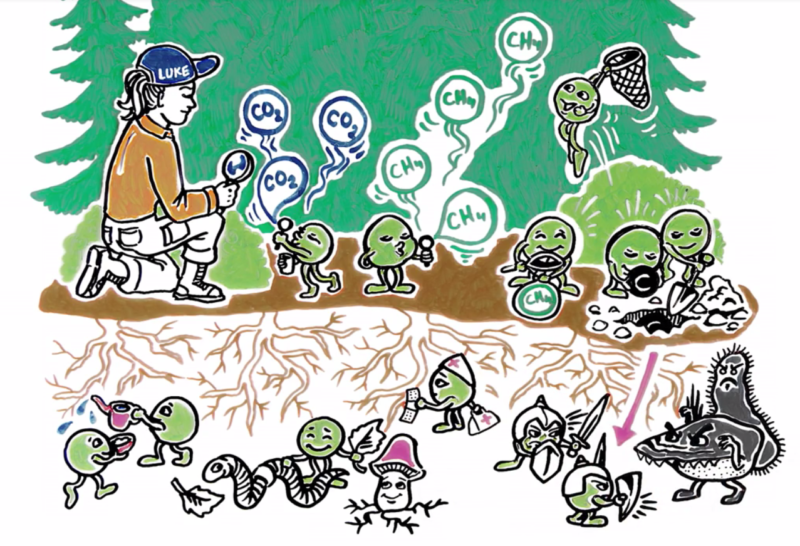