In the UK, as in all Member EU states, European (EN) Standards are used as the basis for most emissions monitoring requirements.

The Industrial Emission Directive (IED) states that monitoring should be carried out in accordance with standards developed in Europe by Comité European de Normalisation (CEN). If CEN standards are not available, those developed internationally by International Organization for Standardization (ISO), or other national or international standards should be adhered to, which ensure the provision of data of an equivalent scientific quality.

The UK is active in ensuring that appropriate standards are developed and used.

British Standards EH2/1 committee sends UK experts to participate in CEN-TC264 working groups where EN standards are developed. Fortunately in the UK there are a significant number of professionals (from the STA, test houses, regulators, process operators, consultants and suppliers) who are active within this process, meaning the UK’s technical experience and culture for ‘open’ standards is well represented in the standards making process.

European Standards are based on a consensus by CEN member countries channelled through their national standardisation organisations. Most standards are initiated by industry. Other standardisation projects can come from consumers, small and medium-sized enterprises (SMEs) or associations, or even European legislators.

ISO International Standards ensure that products and services are safe, reliable and of good quality. For business, they are strategic tools that reduce costs by minimising waste and errors, and increasing productivity. They help companies to access new markets, level the playing field for developing countries and facilitate free and fair global trade.

With the increasing requirement for the installation of continuous emission monitoring systems (CEMS) it is important that capital investment is protected and that instrumentation gives reliable, meaningful and repeatable data. Fitting EN15267 approved equipment is one element of this, but it is extremely important that the system is verified. The verification process requires the use of standard reference methods to underpin the data.

Standard reference methods are essential for the effective measurement and control of air pollution. The robustness and fitness for purpose of these standards is a function of the accumulated expertise and experience of the people who work together in committee to produce them.

ISO standards are accepted on a case by case principle, it is not mandatory for a member country in the European Union (EU) to adopt a standard.

CEN standards must be implemented by member states of the EU. If a conflicting standard is in existence then this must be withdrawn.

Along with the following information, Figure 1 shows how standards are adopted in the UK and published by the British Standards Institute (BSI): 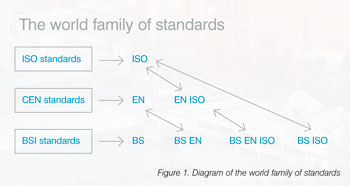 1.  Should a standard be developed in the UK by BSI, it will be prefixed by BS, e.g. BS 3841-1:1994 Determination of smoke emission from manufactured solid fuels for domestic use.

2.  When a standard is developed and published by CEN it is prefixed with EN, and when introduced in the UK it will become a BS EN document, e.g. BS EN 1911:2010 Stationary source emissions – Determination of mass concentration of gaseous chlorides expressed as HCl. As stated previously, any conflicting standard must be removed.

3.  A standard can be developed by CEN or ISO under a joint agreement and then it is published by CEN and ISO with a prefix EN ISO and in the UK it then becomes an BS EN ISO prefix, e.g. BS EN ISO 23210:2009 Stationary source emissions – Determination of PM10/PM2.5 mass concentration in flue gas.

4.  When a standard is developed by ISO it is prefixed ISO. Should this standard be adopted in the UK it becomes BS ISO, e.g. BS ISO 25597:2015 Stationary source emissions – Test method for determining PM10/PM2.5 mass in stack gases using cyclone samplers and sample dilution.

Standards developed and published by CEN are generally accepted as being the most robust. Other standards are still important, however, as there are substances that are not, as yet, covered by CEN standards. The choice of the method is often dictated by the requirements of EU Directives, such as the Industrial Emission Directive (IED), where, for example, the use of CEN standards is mandatory.

The standards bodies have various technical committees that are responsible for the development of the standards. For emission to air the CEN committee is CEN TC 264 and for ISO is ISO TC 146 SC1.

To complement this activity the EA, in co-operation with the STA, publishes Method Implementation Documents (MIDs), which provide guidance on how the UK interprets the standard and provides critical guidance on issues not addressed in the standard (see www.s-t-a.org/?page=mids). The MIDs address issues where it has been difficult to obtain agreement across the European working group, and provide pragmatic guidance on detail. The EN standard 13284-1 applicable to sampling dust in a stack, for example, is ‘silent’ on the issue of filter conditioning ahead of sampling, which recent experience has shown to be important for high quality measurement at low dust levels. This is now detailed in the MID (which is of value to the UK community effective today) and will be a UK contribution to the CEN standard when it is revised in the future. Where further clarification is required or standards do not exist, the EA develops various Technical Guidance notes, see: www.environment-agency.gov.uk/business/regulation/31831.aspx

Published: 27th May 2015 in AWE International 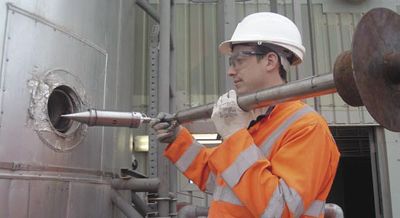