Food and drink production is an essential part of our culture. As the UK’s largest manufacturing sector, the food and drink industry shapes our landscape and our way of life. It is fundamental to the UK economy, employing more than 400,000 people and contributing over £28bn a year to the economy.

Food and drink manufacturers employ people in every corner of the country and export goods valued at over £20 billion a year. Ninety-six per cent of firms are micro to medium-sized, with production widely dispersed across the UK.

Food is part of the UK’s Critical National Infrastructure. The UK’s 6,800 food and drink producers sit at the heart of a food supply chain which is worth £110 billion to the economy and employs four million people. We ask the new Government to join us in our shared mission: to continue to provide consumers with safe, affordable and nutritious food and drink and unlock our growth and productivity potential.1

The size and nature of the industry mean that food and beverage manufacturing is now a constant process with many manufacturers producing goods on a 24/7 basis. One consequence of this neverending production cycle is that noise is being generated by factories and delivery vehicles throughout the day and night – including during the more sensitive weekend periods.

If this noise is not properly assessed and mitigated it can lead to adverse impacts and noise complaints from residents living in the vicinity of the factory and in more serious cases can lead to health effects, such as:

In addition to the health impacts, if it is determined that production facilities are causing adverse impacts and effecting the amenity of local residents, then a business can be served a Noise Abatement Notice by the Local Authority, which as a worst-case could lead to the facility being forced to cease production altogether.

To reduce the potential for adverse noise impacts from production processes, and in order to facilitate planning permission for new or expanded facilities, it is typical to conduct an assessment of the noise impact on any ‘noise-sensitive receptors’ such as residential dwellings in the nearby area.

British Standard 4142:2014 Methods for rating and assessing industrial and commercial sound is utilised by the majority of Local Planning Authorities to assess the likely effects of sound on people at the nearest noise-sensitive receptors.

This article provides a description of the basic procedures, as listed below, and actions which would need to be undertaken in conjunction with a BS4142:2014 noise assessment. 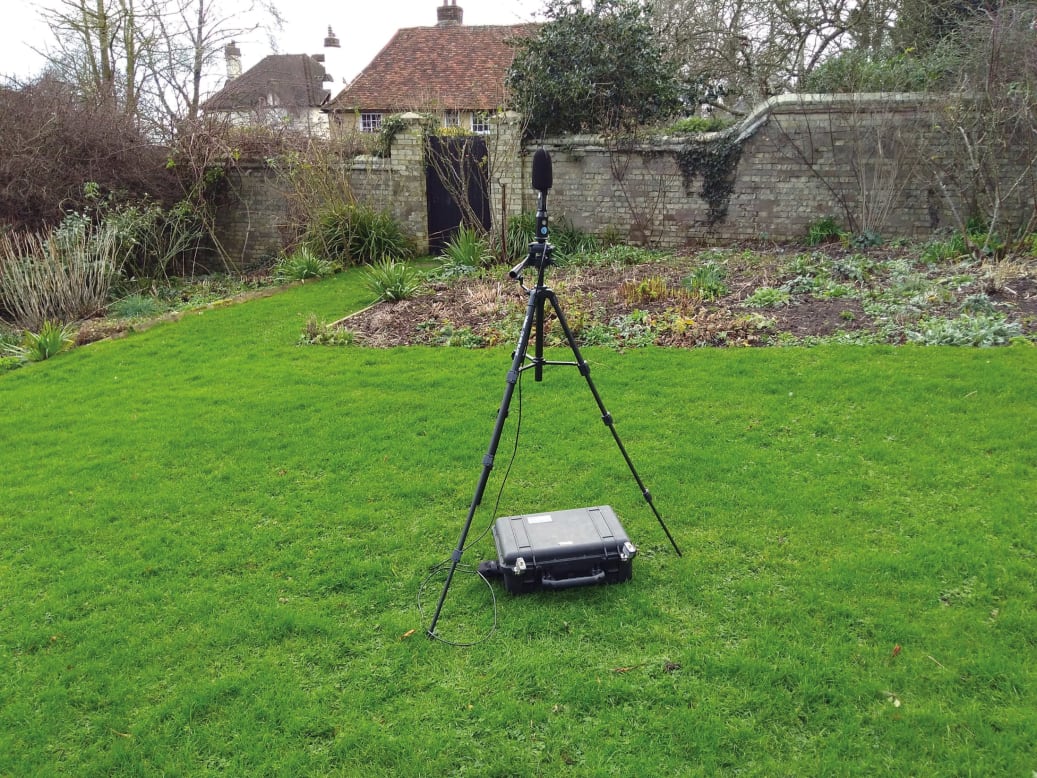 The baseline background sound level can be defined as the level exceeded for 90% of the measurement period, i.e. it is a baseline background noise level that excludes noisier events such as cars passing by and overhead aircraft. Assessing to this ‘quieter’ noise level, and mitigating (if necessary), noise from a proposed facility to a level no more than 5dB(A) above this baseline (lower limits may be required), ensures that noise impacts of a facility are kept to a minimum.

To prevent an erroneously high baseline measurement, it is advised that measurements are undertaken during suitable weather conditions, i.e. dry, with low wind speeds and outside periods of extreme temperatures to avoid the measurements being influenced by metrological effects.

The sound levels being generated by operations associated with the proposed facility, including fixed plant, on-site mobile plant and heavy good vehicles, are then predicted at the nearest noise sensitive receptors.

“if it is determined that production facilities are effecting local residents, then a business can be served a Noise Abatement Notice by the Local Authority” 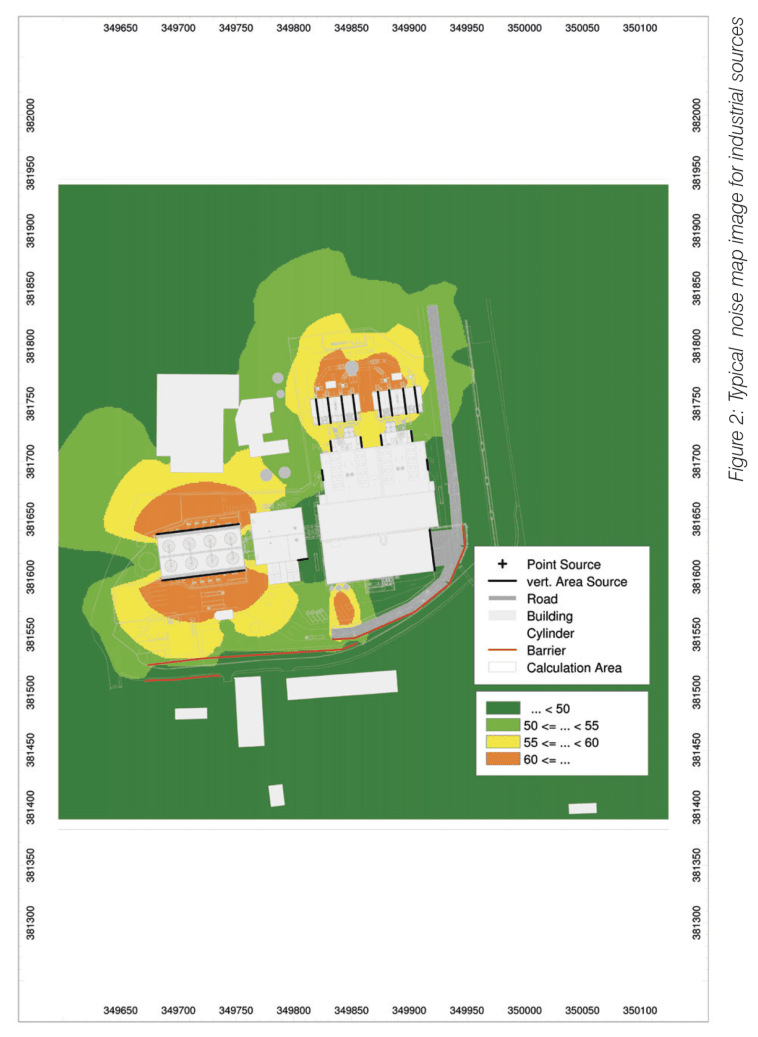 The predictions consider the following factors, which all have an influence on the sound levels at the nearest receptors:

In conjunction with the factors listed above, the sound levels being generated by the facility at the nearest noise-sensitive receptors would be determined; this level is defined as the specific sound level.

Determining a rating level of the proposed facility

The sound generated by a source will have different characteristics which are subjective, i.e. a sound which has a tonal content is considered to be more ‘annoying’ than a sound of the same specific level that does not have any tonal properties.

To account for the acoustic character of sound sources, BS4142:2014 states that penalties should be applied with respect to “the subjective prominence of the character of the specific sound at the noisesensitive locations and the extent to which such acoustically distinguishing characteristics will attract attention.”

In this respect, the acoustic ‘character’ of a specific sound can be described using the following definitions from BS4142:2014:

Once the total amount of penalties has been determined in dB terms, this figure is added to the specific sound level to calculate the rating level.

To determine the total amount of penalties to be applied to the specific sound level, the following is considered:

With regards to the degree of audibility for each sound characteristic this would be determined by studying the specific sound levels at each noise-sensitive receptor in comparison with the measured baseline levels, from previous experience on other sites of a similar nature and from observations made by the acoustician during the baseline survey in relation to the prevailing soundscape at the monitoring locations.

The assessment of noise impact

Once the rating level has been determined at each noise sensitive receptor, this is then compared to the background sound level, measured at each receptor during each time-period and the difference between the two levels is assessed in accordance with the guidance in BS4142:2014.

With regards to what is meant by ‘context’, this considers that in certain environments the margin by which the rating level exceeds the background level would have less of an impact when compared to other situations.

For example, in an urban environment where the existing soundscape already contains sounds of an industrial or commercial nature, a +5dB exceedance in the background level would be considered less of an impact than in a quieter rural environment, where the operation of an industrial facility would mean the introduction of a new noise source in the area, which is likely to be clearly perceived by residents.

If the conclusions of the BS4142:2014 noise assessment determine that there is an indication of adverse impact at any of the nearest noise-sensitive receptors, then mitigation measures can be explored and implemented where possible.

With regards to the type of mitigation to be implemented, as a general note it is considered that mitigating the noise at ‘source’ should be looked into before investigating ways of mitigating the passage of sound between the source (facility) and the receiver (noise-sensitive receptor).

Methods of mitigating noise at source include:

Once the most appropriate type of mitigation has been explored and implemented, the BS4142:2014 assessment would be repeated with the aim of demonstrating that the mitigation would reduce the rating level to a value that would indicate no adverse noise impacts.

The production of food and drink is essential, the size of the industry and the obvious need for produce means that food and drink manufacturing is a constant process.

If not properly assessed and mitigated the noise generated by the manufacturing processes has the potential to cause serious health implications to residents living in the close vicinity of a production facility, which in-turn could lead to the facility having to shut down and cease production.

This article has outlined the procedures that are completed as part of a British Standard 4142:2014 Methods for rating and assessing industrial and commercial sound assessment; an assessment which is often required to demonstrate that noise from a facility would not cause an adverse noise impact to local residents. The assessment is often therefore considered an essential document when considering an application for planning permission.

The scope of BS4142:2014 is far greater and more detailed than the processes described above, and each facility would be assessed to a site-specific basis; however, I hope this article has provided you with the basic principles for assessing noise generated by the production process.

SLR Consulting Ltd has undertaken BS4142:2014 assessments for a number of production facilities associated with the food and beverage industry. Two case studies are provided below.

SLR were commissioned by Greggs Plc in August 2018 to undertake a noise impact assessment in conjunction with BS4142:2014 to support the planning application of a new two-phase distribution centre on the outskirts of Amesbury, Wiltshire.

The comprehensive report looked at the impact of operational noise generated by mechanical plant; external HGV movements and staff vehicle movements both inside the site boundary; and internal operations within the cleaning and food storage facilities of the building.

Several detailed noise map models were created to assess the likely impact on occupants of the nearby Holiday Inn and residential cottages on the north side of the A-road to the site. 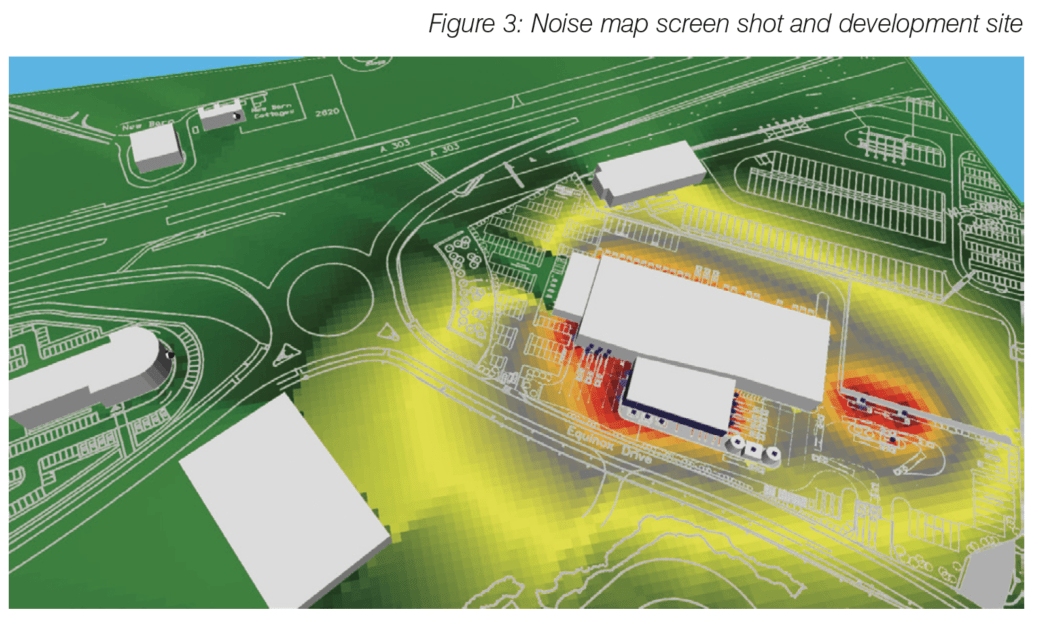 The conclusions of the assessment determined that additional noise mitigation measures were not required at the site and therefore noise did not pose a material constraint for the development proposals.

SLR were commissioned in July 2013 to undertake a noise impact assessment in conjunction with BS4142:2014 to support the planning application of a new bakery located near Leicester. 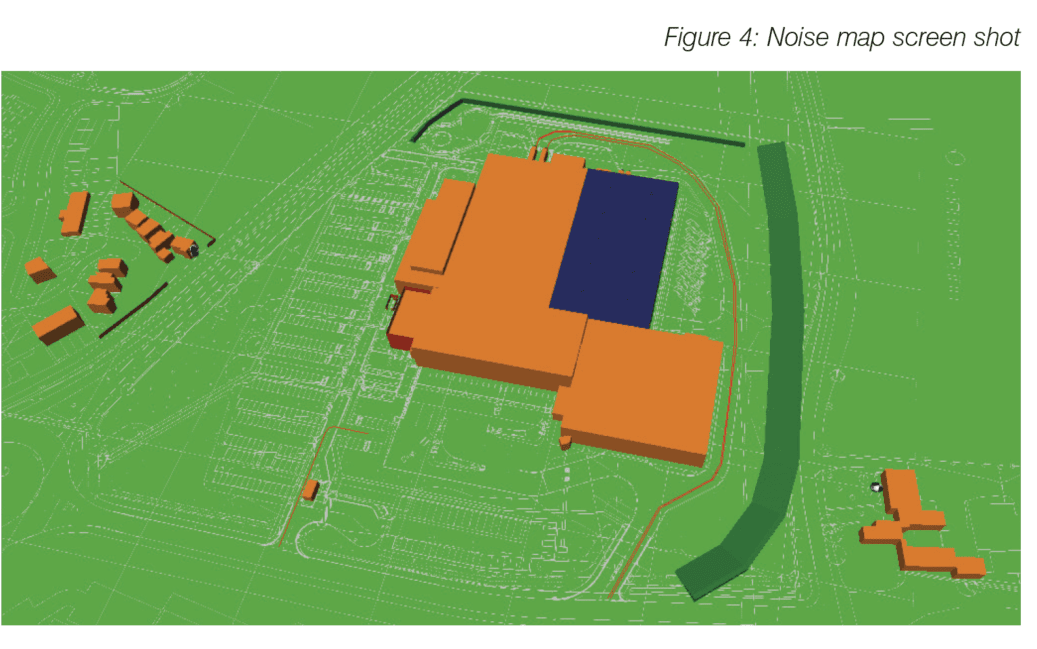 In 2018 SLR were again commissioned to undertake a second noise impact assessment for the extension of the facility, to support an additional planning application.

The detailed assessments involved predicting the noise levels being generated by the various internal and external sources at the nearest noise-sensitive receptors, within noise modelling software. The sources included plant rooms, blast freezers, dust extraction units, water pumps, chillers, unloading operations from HGV’s, as well as the noise breakout from the main buildings associated with the facility. 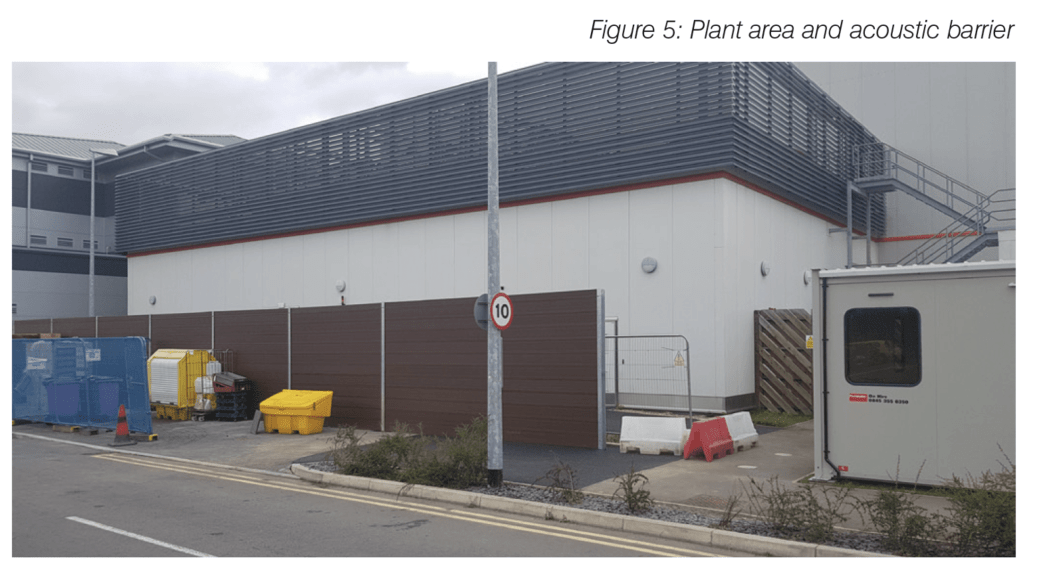 The assessments and subsequent noise investigations at the site concluded that there was a requirement for an acoustic barrier to be erected in front of the main plant area and a louvre located on the façade of the plant area facing the nearest noise-sensitive receptors.

Benedict is the Technical Discipline Manager for the acoustics team has worked out of the SLR Nottingham office since 2004. He has project managed noise and vibration impact surveys, assessments and full EIA’s for industrial, mineral, waste, renewable energy and residential developments throughout the UK.