The Arctic is subject to amplified climate warming, and there is potential for greenhouse gas release from thawing submarine reservoirs.

Methane hydrates are an ice-like solid, which is stable at high temperature and low pressure. They form naturally in marine sediments, where there is a supply of methane within its temperature-pressure stability field. Globally, but especially in the Arctic, methane which has accumulated as hydrate is beginning to be released as gas by warming temperatures. Research at the National Oceanography Centre (NOC) is leading important insights into this phenomenon, which potentially has important implications for the future of the global environment.

Methane hydrates have received attention as a potential alternative energy resource, as well as a potential source of greenhouse gas to the atmosphere. If global climate change causes methane in submarine reservoirs to become unstable, seep out from these deposits and enter the atmosphere; it could cause a positive feedback effect for global warming. This effect may have been important during periods of warming in the geological past.

Since 2008 when methane seeps were first discovered in Svalbard, there has been a multi-disciplinary approach by the research community to better understand what might cause seeps to become unstable. Sonar systems on board research ships have been used to detect submarine methane seepage. This system images streams of bubbles rising from the seabed as acoustic flares. In excess of 200 acoustic flares reported along a 30 km long section of the upper continental slope west of Svalbard caused the international research community to take notice, since the rising bubbles were likely linked to methane hydrate destabilisation resulting from global climatic change.

The future of methane hydrate stability

A recent study led by Dr Carolyn Graves at the NOC has shown that in some settings the ocean water column is an effective barrier to methane transport, from the seafloor up to the surface water and then into the atmosphere.

In continental slope sediments the pressure that keeps methane hydrate deposits stable is determined by the weight of the overlying ocean water and sediment. Above a certain ocean temperature, these deposits are not even stable in water shallower. Warming ocean waters, therefore, will cause methane deposits to be released as a gas in increasingly shallow waters. Except in frozen permafrost environments, marine methane hydrate destabilisation is not expected to occur in waters significantly shallower than about 350m, because hydrate was never stable there at normal marine temperatures. Arctic regions host the shallowest methane hydrates because of their low ocean temperatures. Methane released from hydrates in marine sediments is therefore most likely to reach the atmosphere in the Arctic. Off Svalbard, this is occurring at depths of approximately 360m to 400m, where sonar flares are principally observed.

Since oceans are undersaturated in methane, bubbles rising from seeps dissolve quickly. The speed at which this methane rises reduces abruptly when it becomes dissolved. This slowing is caused by the organic coatings and films that form on methane bubbles. Although rapid and intense methane bubbling can speed up a gas bubble’s transport towards the surface, the lack of direct venting of methane to the atmosphere through 400m of ocean can reduce the impact of destabilisation on the global environment.

Above the Svalbard methane seeps, all gas dissolves in the lower 200m of the water column. The highest concentrations of dissolved methane are restricted to the lower 75m of water. This implies that the site does not contribute substantial amounts of methane gas to the atmosphere.

What happens to methane that dissolves at the seafloor seep site? This question was the focus of a recent study that used measurements of dissolved methane concentrations at the Svalbard seeps to look at the processes that control the fate of seep methane after it has dissolved.

Dissolved methane is transported along with seawater in ocean currents. Like many continental shelf environments, the water above the site of the seeps off Svalbard is part of a strong oceanographic current. This current is called the West Spitsbergen Current: the northwards extension of the Atlantic Ocean’s Gulf Stream. The West Spitsbergen Current is the primary source of warm salty water to the Arctic Ocean. The rapid northwards flowing West Spitsbergen Current flushes over the methane seep sites off Svalbard and carries the dissolved methane away with it. This physical transport of the methane away from the seep source prevents accumulation of extremely high local methane concentrations.

Once dissolved, methane is subject to oxidation by microbes that live in ocean waters. These organisms, called methanotrophic (methane-eating) bacteria, derive energy and biomass from the oxidation of methane into carbon dioxide. Carbon dioxide is also an important greenhouse gas, as well as a cause of ocean acidification. However, methane is much less abundant in the ocean and in the atmosphere than carbon dioxide, so extremely large methane emissions are required for the carbon dioxide produced from methane oxidation to make a significant contribution compared to other sources of carbon dioxide.

Vertical transport of methane from the bottom waters where gas bubbles emitted from the seafloor dissolve towards the ocean surface is relatively slow, because it is restricted to turbulent diffusive mixing. This term encompasses all small-scale physical ocean mixing processes, like eddies, which exchange parcels of water vertically. The ocean is density stratified: water at any depth is more dense than the water above it. A particularly steep density gradient, called a pycnocline, separates fresh cold Arctic surface water from the saline warm water of the West Spitsbergen Current which flows at depth.

Physical mixing of ocean water is much faster between waters of the same density than waters with different densities. This means that in the time required for high-methane containing water to be mixed upwards from the Svalbard seeps, methane concentrations have already been decreased by dilution resulting from turbulent horizontal mixing.

Simultaneous physical dilution of dissolved methane by mixing processes, and consumption of methane by organisms, occur while methane-rich bottom water is swept northwards away from the site of seafloor seepage off Svalbard. Vertical mixing is the slowest of these processes, so there is no significant vertical transport of methane into surface waters immediately above the seafloor seeps at 400m water depth.

Slightly elevated methane concentrations in surface waters are observed because of horizontal transport from methane seeps in shallower water off Svalbard, on the shelf at about 100m water depth.

It is yet not clear how the occurrence of these shallow water seeps might be linked to climate warming and methane release from temperature sensitive methane reservoirs. The amount of methane released from shallow shelf sediments may increase, decrease, or remain relatively constant under future climate conditions.

A strong increase in methane seepage activity would be necessary for this area to be a significant source of methane to the atmosphere. Current methane-supersaturation of ocean surface waters provides a summertime methane flux of less than 0.7 mg CH4 /m 2 /day. Even extrapolated onto the entire continental margin of Spitsbergen, this is less than a hundredth of a percent of recent estimates of global methane emissions from natural sources (cite Kirsche et al 2013 for global methane budget).

How representative is the area investigated off Svalbard of the marine Arctic as whole?

Observational research in the Arctic is logistically challenging so very few regions are well studied. One other region which is well characterised is the East Siberian Arctic Shelf, north of Siberia. In this setting over 50 times more methane is emitted per cubic metre of surface ocean per day than off Svalbard. Why the huge difference? Likely reasons are shallower water depths and more intense bubbling of methane from seafloor sediments on the East Siberia Arctic Shelf. The ability of the ocean to stop methane emissions to the atmosphere is a key control, particularly at the depth of Arctic methane destabilisation.

As more Arctic Ocean methane seep sites are studied, our understanding of the role of ocean water in stopping methane escape into the atmosphere will continue to improve.

As warming continues in the Arctic and the rest of the planet, will marine sediment sources of methane play a role? Considering climate feedback requires thinking on long timescales of hundreds to thousands to millions of years. Observations show that at the moment, methane hydrate destabilisation off Svalbard is not a significant source of methane to the atmosphere. This means that methane released is not contributing to further warming by acting as a greenhouse gas in the atmosphere, so no methane climate feedback has been established.

Nevertheless, Arctic Ocean bottom water temperature will continue to rise and release more methane from frozen reservoirs. This methane, and the carbon dioxide produced when it is microbially oxidised, will have an impact on the ocean system and potentially the atmosphere in the longer term. 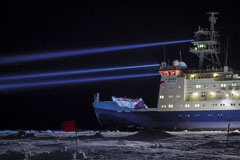