James Dodgson explains how a collaborative approach is key to the effective management of the risks associated with asbestos in soil.

In recent years, asbestos contamination within the ground has become increasingly challenging for anyone seeking to develop brownfield sites. While there is an increasing amount of advice available, including the recently published good practice guidance from the Construction Industry Research Information Association (CIRIA), there is often uncertainty around the most appropriate approach to take.

Today, the dangers of asbestos contamination are widely recognised. When inhaled, the fibrous minerals that make up asbestos, most commonly Chrysotile, Amosite and Crocidolite – white, brown and blue asbestos, respectively – can lead to serious health effects such as mesothelioma and lung cancer.

The Control of Asbestos Regulations (CAR) 2012 aim to reduce the risk of exposure to asbestos by requiring businesses to comply with strict procedures during the demolition and redevelopment of buildings that may house asbestos containing materials (ACMs). Despite this, asbestos is still routinely found within the ground and detecting asbestos within soil and rubble is not always easy, as fragments can be difficult to identify using the naked eye and free fibres are often not visible at all.

Origins of asbestos in soil

While naturally occurring asbestos is considered to be a very minor source of contamination in the UK, most instances of asbestos in soil are caused by manmade activities such as production processes, manufacturing, demolition and illegal tipping. When demolished, older homes and industrial structures that incorporate ACMs can contaminate the residual soil.

Although not a new risk, recent years have seen a significant increase in focus on the potential for asbestos to be found in the ground and so-called asbestos containing soils (ACSs) have attracted greater attention.

With the release of CIRIA’s new good practice guidance in March 2014, the first published in the UK since 1990, this – along with a greater awareness in the market place, more sensitive lab tests, and increased pressure from local authority planning departments – has contributed to the issue moving up the agenda for contractors and developers.

But what does “Asbestos in soil and made ground: a guide to understanding and managing risks” mean for businesses, and what impact does it have on health, safety and waste classifications?

Health and safety implications resulting from asbestos contamination in the ground fall into two categories: those risks associated with the actual development work on site, and the risk associated with the site’s end users or occupiers. The latter is assessed as part of the planning process by the local authority planning department.

At present, the most commonly used measure for gauging asbestos in soil risk is the threshold of 0.001 per cent, which was proposed by the Inter-departmental Committee for the Redevelopment of Contaminated Land (ICRCL) in 1990. However, CIRIA’s guidance suggests that due to the limited understanding of soil-to-air relationships for asbestos, this threshold level may not be an appropriate indicator of risk, and the guidance calls for more research and policy decisions in the UK in order to provide clearer direction.

In addition, the CIRIA guidance suggests that where ambient air monitoring is being undertaken on contaminated sites, the use of the HSG248 methodology alone may not be appropriate. This is because the limit of detection through that method is not considered low enough to compare results to background levels of asbestos fibres in the air. Consequently, even where statutory obligations to the Health and Safety Executive (HSE), Environment Agency (EA) and local authority planning departments are met, there could still be the potential for civil liability claims in future under the Compensation Act 2006.

This is because, as the guidance points out, even low concentrations of asbestos in the air have the potential to harm the health of building residents and users, meaning the current HSE limits on asbestos fibre concentration in the air are not actually ‘safe’ levels. Recent civil cases have shown that exposure to asbestos above background levels (not the HSE control limit) could be deemed to have caused or contributed to an asbestos related disease.

It is also recommended that the environmental and indoor air quality of the completed development is tested with detection limits in the order of 0.00001 f/cm 3 to more accurately identify any potential health risks to the end user.

If ACSs are found to be present on site, the landowner or developer has several options. If the ACS poses a negligible risk, then it may be advisable to leave the material in-situ and undisturbed. However, the risk may become more of a long term concern if residential development is taking place.

If only traces of asbestos are present, the ACS does not necessarily have to be disposed of and can potentially be reused on the same site, subject to suitable risk assessment and working methods. The process for making this judgement and managing the implementation must be carefully managed and documented, ideally with advice and guidance from specialist consultants. This should involve a valid soil risk assessment and any movement of the material on site must be conducted in line with current asbestos and waste legislation.

A key part of the CIRIA guidance is the section on appointing consultants, contractors and specialists. The report stresses the importance of implementing a multi-disciplined approach in order to “adequately investigate and assess the potential risks while complying with CAR 2012.”

Joanne Kwan, project manager at CIRIA, said: “Tackling any potential asbestos risk requires the skills of trained practitioners. This may include one or more asbestos specialists, contaminated land consultants, geotechnical, environmental and ground engineers, in addition to UKAS-accredited laboratories and materials testing houses.

“It’s crucial, therefore, that clients provide a clear specification for any investigation in order to effectively co-ordinate multi-disciplined teams. This is especially true for sites where the potential for asbestos contamination is deemed to be complex – usually involving different types of asbestos fibres – or of elevated risk to residents or end users.

“The best advice is always to consult a specialist if there is any doubt about the potential for contamination. Once a risk assessment has taken place, it will become clear the extent to which a multi-disciplined approach is needed based on the specific nature of the site.”

Looking ahead, it is clear that there is more work to be done to expand the current guidance to clarify when CAR 2012 applies to soils and whether work with ACSs is licensable or not. More research is also needed to gauge how much of a risk is posed by even low levels of asbestos fibres in soil to people using made ground sites.

Despite this, there has never been more support and guidance available for landowners and developers looking to build on brownfield sites, and CIRIA’s new guidance document will go a long way towards helping them to thoroughly assess the risk of asbestos in soil, not just buildings. Combined with the HSE’s work to update its 2005 analysts’ guide to include sampling and analysis of asbestos in soils, and a Joint Industry Working Group formed by the Environmental Industries Commission (EIC) and Contaminated Land: Applications in Real Environments (CL:AIRE), the future looks positive for further developing the hazard classification systems for ACSs. 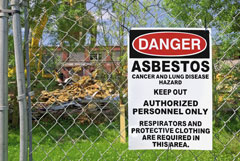