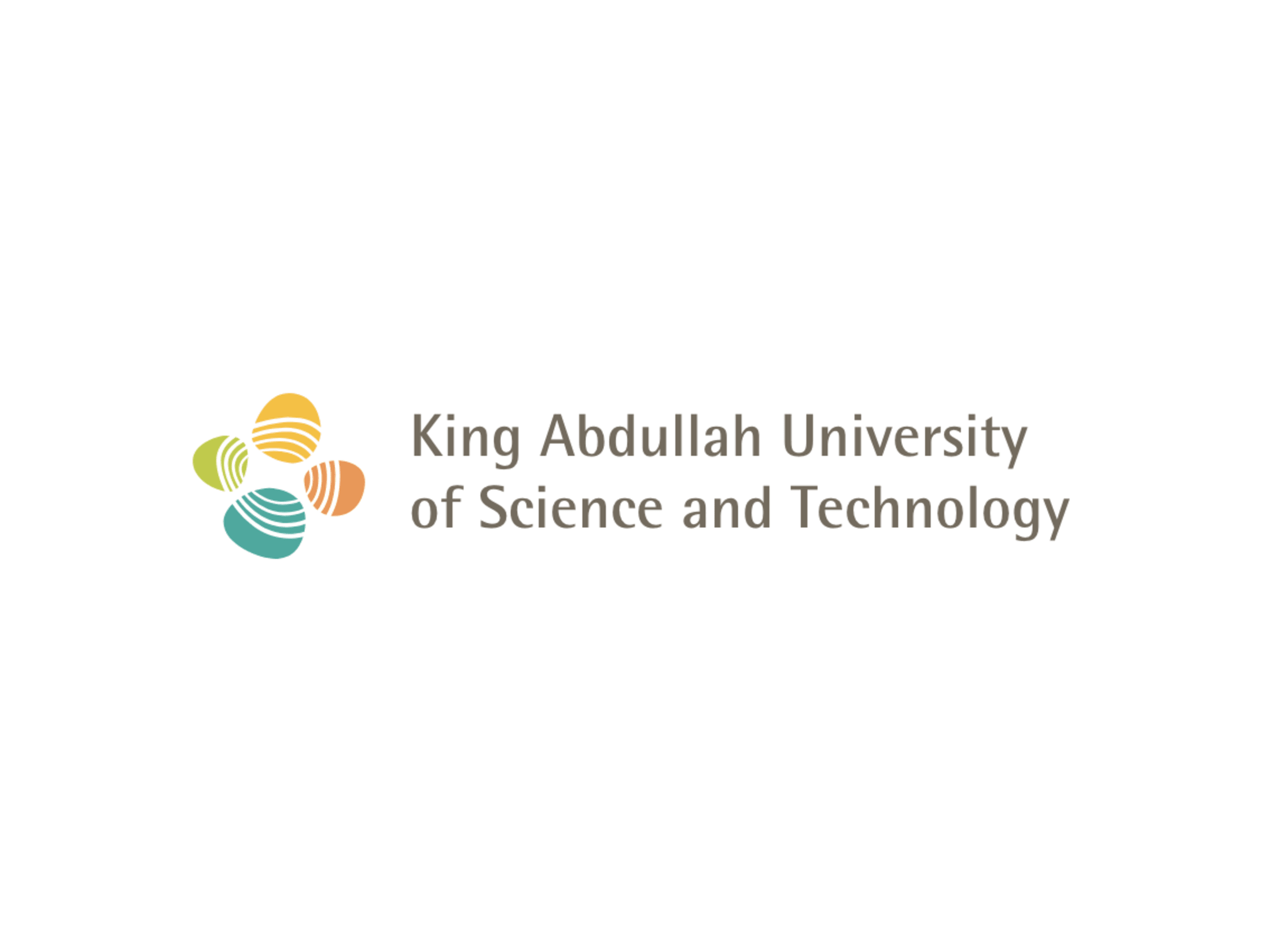 Humans have adapted to thrive at optimal humidity levels between 40 and 60 percent. In some parts of the world, however, humidity levels are substantially lower or higher.

In indoor environments, where modern life in many parts of the world has necessitated spending long hours inside, levels both above or below the optimal zone have been known to increase the likelihood of health and environmental issues. Additionally, high humidity levels can exacerbate experience of warm and cold weather alike. Despite the challenges high humidity levels present, there are limited solutions to combatting high humidity indoors, with air conditioning and ventilation forming current best practice.

Researchers at the King Abdullah University of Science and Technology (KAUST) in Thuwal, Saudi Arabia have created a new metal organic framework (MOF) stable to water that can adsorb and then release up to twice its weight in water with promising applications in confined space humidity regulation, such as office buildings, aeroplanes and cars. The recycling process is achieved by a sequence swing between high and low relative humidity levels. A separate team of researchers at the university are taking a different approach to humidity, innovating ways to harvest drinking water from water vapour using salt and sunlight.

When air is warmed, its relative humidity is reduced. Consider a hair dryer, for example. Drying hair with the heat setting turned on will dry hair at a much faster rate than without heating. The heat from the hair dryer temporarily reduces the ambient humidity around the hair, which facilitates water evaporation and drying. 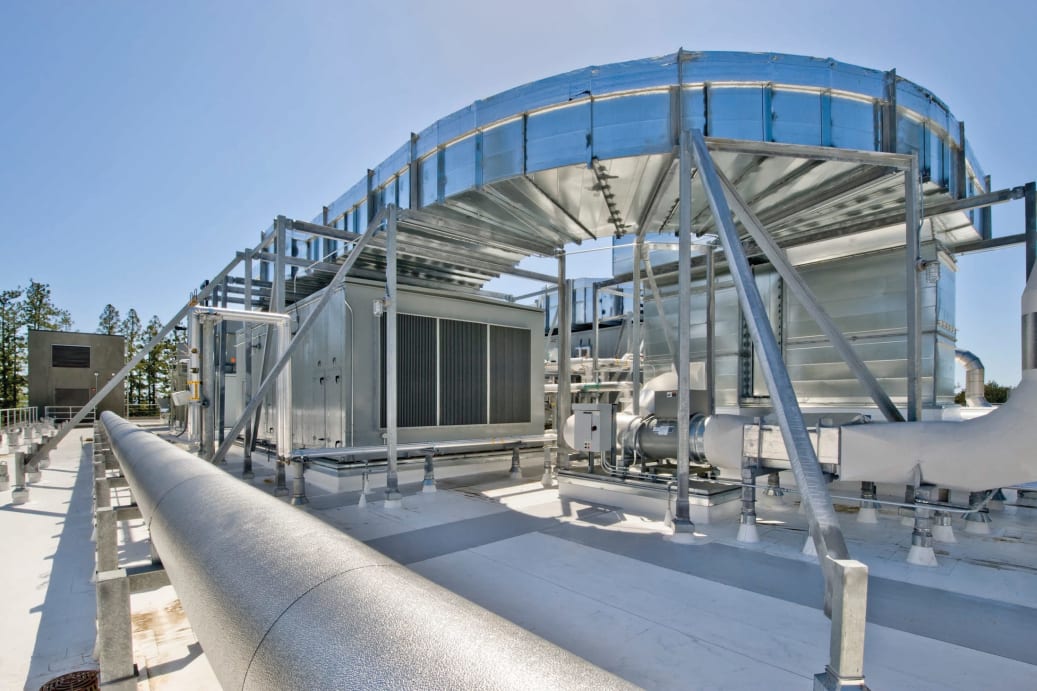 Heating and cooling to regulate humidity

Indoor humidity levels are largely determined by relative humidity levels outside, as well as human exhalation and perspiration. Given humidity’s ability to affect subjective perception of heat, regulating humidity, as well as temperature, is of paramount importance in indoor spaces, such as office buildings, schools and homes. The options, however, are sparse. Heating, ventilation, and air conditioning (HVAC) systems are the primary method for indoor humidity control. Air conditioning systems not only cool indoor air, but also condition by removing humidity. In some places, like Saudi Arabia for example, air conditioning forms more than 70% of the country’s electricity demand, doubling in the summer months compared to winter.

The systems work by lowering the relative humidity when passing air over a refrigerant evaporator coil which removes some water from the air by water condensation. The air is then adjusted to the set temperature and released from the HVAC. The process is costly and energy intensive, especially on a large scale. Without alternative options, companies, schools and homeowners have no choice, but to use HVACs for indoor climate control. Similar systems are used on aeroplanes and in cars where humidity control is also a major factor in maintaining air quality and passenger comfort. When uncontrolled, humidity is also known to wreak havoc on building materials and for similar reasons, humidity is carefully monitored in art galleries and museums as part of preservation efforts.

More than a bad hair day

In addition to the discomfort resulting from high indoor humidity levels, confined spaces with levels ranging above or below the suggested range, between 40 and 60 percent, may pose health risks. (While there is some debate on the optimal humidity range, the American Society of Heating, Refrigerating and Air-Conditioning Engineers recommends limiting indoor humidity to 65%).

High humidity lends itself to the growth of microorganisms, such as bacteria and mould, which can have serious health effects. Furthermore, humidity levels above 50 percent have been known to increase indoor dust mite levels. High humidity combined with high temperature, as in many regions of the world – particularly those clustered around the equator near the coast – may lead to heat stroke and exhaustion due to the body’s inability to evaporate water for cooling. Conversely, low levels of indoor humidity, lower than 30 percent, have been linked to nose, throat and ear dryness and irritation. There is also evidence to indicate a correlation between low indoor humidity levels in schools and workplaces and higher rates of respiratory infection.

Given the role unregulated humidity levels play in increasing health risks and discomfort, current solutions for controlling indoor climates are necessary, but far from ideal. 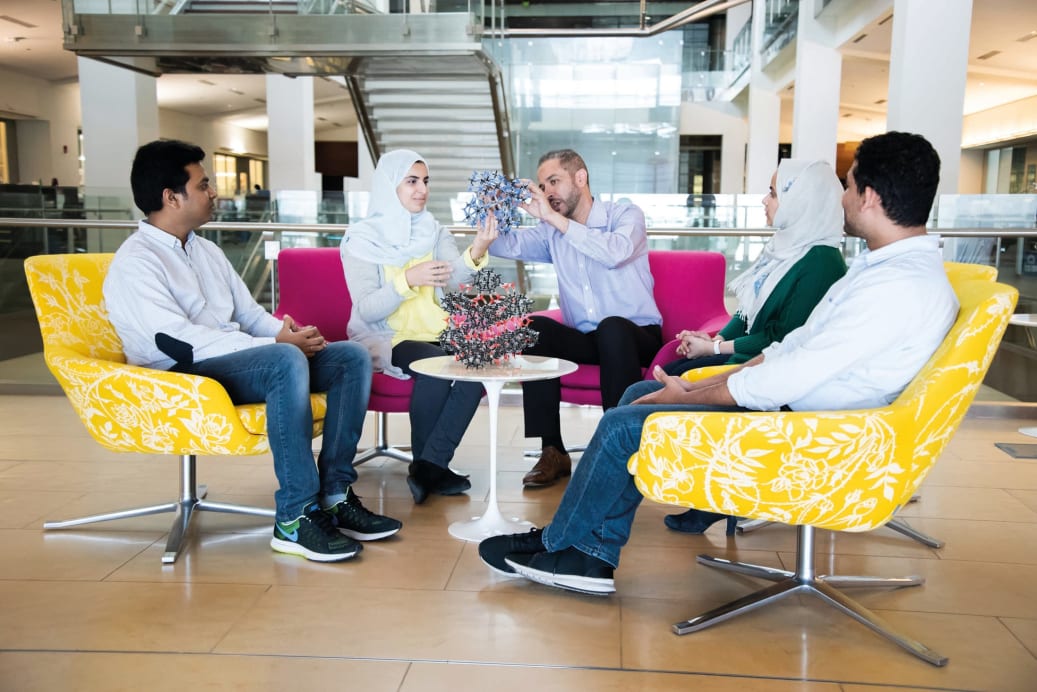 When the Functional Materials Design, Discovery and Development (FMD3) team at the Advanced Membranes and Porous Materials (AMPM) research centre at KAUST in Thuwal, Saudi Arabia, set out to create a new metal-organic framework (Cr-soc-MOF-1) that could dehydrate water from natural gas, they did not expect to find a solution that would also be applicable to humidity control. Mohamed Eddaoudi, director of the centre and distinguished professor of chemical science, and his team, including senior research scientist Youssef Belmabkhout, wanted to find a solution to the corroding power of water in natural gas pipelines.

“metal-organic frameworks can be used for a variety of applications, such as water adsorption”

Metal-organic frameworks, known as MOFs, are compounds made of inorganic ion clusters (forming nodes) and organic linkers (forming vertices). The resulting MOF contains pores that can be used for a variety of applications, such as water adsorption, like the one created by the KAUST team. Controlling the pore size and chemical structure of the MOF varies its function and as such its application. Adsorption is the process by which atoms, ions or molecules, present in a fluid, attach to the surface of an adsorbent. This process occurs at the surface of the material and can be differentiated from absorption, which is a process by which a fluid assimilates throughout the bulk of the material. Adsorption makes it possible for the adsorbent to then release the liquid once again.

The team’s MOF works by adsorbing water from the air due to its innate properties. One of the major advances and unique features of this particular MOF is that it can adsorb twice its weight in water. The MOF’s work does not stop there, however. It also has the ability to reverse this process by releasing the water again when the humidity level falls. The dual process feature makes it an ideal candidate to serve as a cost-effective and energy-efficient humidity control solution.

“Our number one hope was that the MOF would be stable to water. Water is a unique molecule in that it has a tendency to stick to other molecules and cause damage when it detaches from a structure in variable handling and operating conditions. When I saw the shape of the uptake as a function of relative humidity levels, I recognised that there could be an application in humidity. Relative humidity levels should usually be kept between 40% and 60% and the behaviour of this particular material used to make our MOF does just that,” explained Belmabkhout. 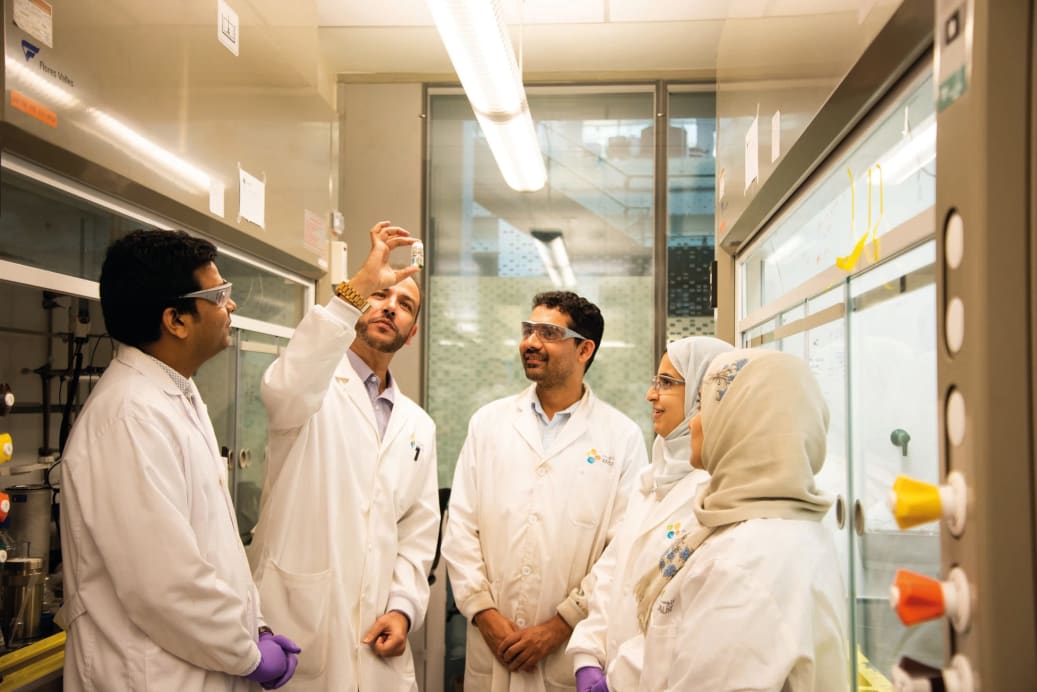 “One of the challenges is that the MOF needs to be adapted to the local humidity levels. Something that works in a coastal region of the Red Sea won’t work in the desert,” Belmabkhout continued. The unique properties of this MOF open up further opportunities for making the most of humidity. “If we change the structure of the MOF, we can shift the water uptake to adapt to various relative humidity levels and make it suitable for different regions. In that case, there may also be applications in water desalination or water harvesting,” he added.

So far, the team has successfully demonstrated up to 1,000 adsorption-desorption cycles proving the MOF’s stability to water. The next step is to integrate the MOF into a process either for water harvesting, desalination or indoor humidity control. The team has received interest from major industry players, giving further credence to the MOF’s potentially game-changing properties. “The heart is in the materials and the heart is there. Now we need to work on bringing the material cost down and designing a system that can put the MOF to work,” he concluded.

The potential of atmospheric water

In an adjacent building, another research group at KAUST, in the Environmental Nanotechnology Lab, located within the Water Desalination and Reuse Center (WDRC) in the university’s Biological and Environmental Science and Engineering (BESE) Division, are taking a different approach to atmospheric water content. Peng Wang, associate professor of environmental science and engineering, along with his PhD student, Renyuan Li, are using a combination of salts and sunlight to effectively capture water vapour from the air. In places where water scarcity is of serious concern, the air still contains a great deal of water. By capturing and releasing water contained in the air, the threat of water scarcity can be greatly reduced. Wang and Li discovered that three common salts, magnesium sulphate, copper chloride and copper sulphate, were successful in capturing water from the air. Once the water vapour is harvested, the salt is heated – ideally with sunlight – to encourage the water to be evaporated and collected as condensation under ambient conditions.

Making the most of humidity

Humidity is usually associated with uncomfortable heat, or cold and damp conditions. In hot climates, controlling indoor humidity levels is both a health and comfort concern that comes at a high energy and financial cost. The FMD3 group at KAUST has created a material that can not only control humidity, but store water and release it again, illustrating a sustainable way to maintain humidity in the optimal range. In low relative humidity regions, Wang and his team have found a sustainable way to harvest atmospheric water using salt and sunlight. The two research groups are finding innovative ways to make the most of what is all around us, but we seldom see.

King Abdullah University of Science & Technology (KAUST) conducts curiosity-driven and goal-oriented research to address global challenges related to food, water, energy and the environment. Established in 2009, KAUST is a catalyst for innovation, economic development and social prosperity in Saudi Arabia and the world. With 100 nationalities working and living at KAUST, the university brings together people and ideas from all over the world.