Faced with inorganic ions and the impact of industrial pollutants, analysts discover the advantages of ion chromatography’s broad range of applications over other forms of environmental monitoring.

Chromatography as a method of separation was discovered in 1903. Russian botanist Mikhail Semyonovich Tsvet separated vegetable dyes by using the phenomenon of adsorption in a chromatography column filled with different substances including calcium carbonate. In order to describe this method he coined a new term from the Greek ‘chroma’ meaning colour and ‘graphy’ meaning writing.

Gas chromatography (GC) and thin layer chromatography were developed faster than liquid chromatography as they were more easily handled in technological terms. It is estimated that using GC enables separation and determination of approximately 20 percent of known chemical compounds, whereas in the case of liquid chromatography it is about 80 percent of compounds. Their applications, however, were limited mostly to the determination of the organic compounds. The classical techniques such as titration, colorimetric, gravimetric, turbidimetric as well as electrochemical methods were successfully used in order to determine inorganic ions.

At first, the research connected with using chromatographic methods for the inorganic substances analysis was not as effective as estimated. The breakthrough was made at the beginning of the 1970s when a few publications referring to the use of ion exchange chromatography for the separation and determination of inorganic cations and anions were published. The most often determined analytes are inorganic and organic ions. In this range ion chromatography is the dominant instrumental analytical technique.

The most popular applications of ion chromatography are determination of common anions (F-, Cl-, Br-, NO2-, NO3-, PO43-, SO42-) and cations (Na+, K+, NH4+, Mg2+, Ca2+) in water and wastewater. Acceptance of ion chromatography for anion analysis was very rapid, mainly due to the lack of alternative methods that could quickly and accurately determine several anions in a single analysis. The situation regarding analysis of cations was quite different. Alternative rapid and sensitive methods were available; however, ion chromatography has advantages over spectroscopic techniques for cation analysis, because it allows for metal and metalloids speciation as well as simultaneous determination of many ions including NH4+.

Until 1975 only a small range of analytical parameters could be measured automatically. It was necessary therefore to develop and validate new methods to extend the scope of such parameters. An alternative that has almost replaced most of the wet chemical methods used in water analysis, is ion chromatography. For laboratories that need to determine numerous anions and cations in several thousand samples, ion chromatography is an attractive technique.

It is especially attractive when the laboratories do not have the throughput to justify the purchase of large automatic analysers, which are usually based on colorimetric procedures. Ion chromatography eliminates the need to use the hazardous reagents that are often integral to wet chemical methods. The separation and detection methods employed in ion chromatography, as well as the selection of ionic species that may be analysed with the ion chromatography method, are summarised in table one and table two. A survey of the detection methods used is given in table three.

Regulators and clients expect to receive accurate and comparable results from a laboratory. Legislators generally define which of various validated methods should be applied to analyse selected samples. In general, standard methods can be chosen to serve as reference methods; however, the laboratory serving a public client should apply official reference methods.

Ion chromatography methods meet these requirements and can be used for routine applications in laboratories. Standardisation on an international level is the responsibility of the International Standardization Organization (ISO). Standard methods can be adopted as recommended on a voluntary basis by any laboratory around the world.

In addition, governments can decide to incorporate existing standards into their national standards. After the publication of US Environmental Protection Authority (EPA) and particularly ISO standards concerning ion chromatography, the number of laboratories applying this technique has increased dramatically. For those laboratories, ion chromatography is a reliable and economical supplement to existing wet chemical methods. Many organisations such as ISO, US EPA, ASTM (American Society for Testing and Materials) and AOAC (Association of Official Analytical Chemists) base their standards or regulatory methods of analysis upon it.

The determination of cyanide in various samples is very important environmentally because of its large scale industrial uses and its extreme toxicity. In all of the analytical methods developed so far for cyanide and sulfide, a necessary first step is removal of interferences. With the ion chromatography method, cyanide and sulfide are separated and are thus determined simultaneously. Polyphosphates are widely used in industrial water treatment applications on account of their sequestering and dispersing properties. Chelating agents such as nitriltriacetate acid (NTA) and ethylenediaminetetraacetic acid (EDTA) can also be determined rapidly by the same approach used for polyphosphonates. Besides the common inorganic anions and cations, chromate and arsenite are of primary concern because of their greater toxicities as compared to chromium (III) and arsenate respectively.

Hexavalent chromium is a toxic form of chromium that must be monitored in manufacturing wastes. Ion chromatography with postcolumn addition of diphenylcarbazide is probably one of the most specific and sensitive methods available for the determination of hexavalent chromium. Water treatment by disinfection processes is considered a major public health achievement of the Twentieth Century. Consequently, there has been a shift in the identification methods of water contaminants from microbiological to chemical.

The number of chemicals determined in drinking water has grown exponentially; however, out of hundreds very few have been studied or have documented proof of their health effects. In the last decade, the use of ozone in the treatment of drinking water to improve taste and odour and to remove organic and inorganic micropollutants has been visibly spreading. In the early 1980s it became obvious that the application of ozonisation in drinking water treatment resulted not only in the formation of oxygenated compounds, but also in bromide containing water; brominated organic compounds and bromate were formed as well.

Recently, bromate has become the most important inorganic oxyhalide byproduct, and its concentration in drinking water has to be controlled. Furthermore, the subjects of interest and advanced research are chlorite and chlorate12. Global and national agencies are continually striving to monitor bromate, chlorite, and chlorate levels in drinking water to establish appropriate regulatory limits. The problem of bromate also concerns bottled water which has become a healthier choice than tap water for many people, because they believe that bottled water contains fewer contaminants or they dislike the taste of chlorinated tap water.

Breaking the processes down

All ion chromatography methods used for bromate, chlorite and chlorate analyses have some advantages and disadvantages; nevertheless, at present ion chromatography is the only accepted standard method for the analysis of inorganic oxyhalide disinfection byproducts. The choice of the most convenient and the best method for the determination of specific oxyhalides depends on many factors, such as expected concentration of analyte, sample matrix, limit of determination obtainable by the method used and its availability.

All the three groups of ion chromatography methods recently developed based on conductivity, UV/Vis and MS detection modes respectively, yield comparable results and comply with the requirements of the international directives concerning inorganic oxyhalide byproducts in drinking water. The future application and choice of method will depend on the equipment available in the laboratories, as well as the number and kinds of samples to be analysed.

With this included, ion chromatography is widely accepted as the standard reference methodology not only for water and waste water analysis, but also for many other matrices. Since its introduction in 1975 ion chromatography has been used in most areas of analytical chemistry and has become a versatile and powerful technique for the analysis of a vast number of ions. The use of ion chromatography over conventional methods of inorganic determination was a crucial progression in the field. 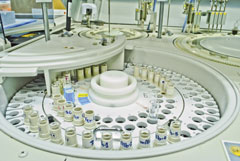