For three consecutive years, the World Economic Forum (WEF) has ranked water crisis at the top of the list of risks across the globe, as the forum’s annual Global Risk Report for 2018 shows.

As the quality and quantity of fresh water declines, finding solutions to treat water from natural resources has become a necessity. In parts of the world that are surrounded by seas and oceans, saline water desalination compensates the shortage and succeeds in supplying the need of growing populations around the globe.

Nevertheless, desalinating seawater comes at a high cost. Seeking low-cost technologies that are also environment friendly is an ideal solution to sustain this water treatment method.

Saline water desalination is popular in the Middle East, as this region makes over 53 percent of all the major desalination plants worldwide, according to the International Desalination Association (IDA) Desalination Yearbook 2016-2017. Saudi Arabia, with a growing population of 32 million, relies heavily on desalination to produce water, and it is the largest producer of desalinated water in the world. With around 30 desalination plants, the Gulf state announced this year its plan to build nine additional plants on the Red Sea. Ras Al-Khair, Saudi Arabia’s biggest plant, has the capacity to produce 728 million litres per day.

“I hybridised the AD cycle with MED to boost the production of water,” he said. Ng pioneered a similar cycle in 2010 at the National University of Singapore (NUS) for space cooling.

“When a team from KAUST visited NUS, I showed them the facilities, and a member of the visiting team asked, ‘Why don’t you use it for desalination?’ That struck the idea, and that’s how I started using the cycle for seawater desalination,” Ng noted.

“Low energy desalination is in line with Saudi vision 2030,” said Ng. “Our research in the lab translates to industry. It is not only innovative, but it is also low in energy consumption and maintenance cost.”

The innovative AD cycle desalinates seawater using solar energy that is utilised to regenerate silica gel adsorbent. Solar energy at a temperature of 60 to 80 degrees Celsius is sufficient for regeneration, and the renewable solar energy is an available asset in Saudi Arabia throughout the year. The desorbed vapour from silica gel, after supplying regeneration heat from solar, is then condensed in the seawater-cooled condenser. Once the vapour is condensed, it becomes pure water.

“This water becomes drinkable after some post-treatment as it lacks minerals, and calcium is added for mineralisation of the water while ozone gas is added to disinfect the water for potable purposes,” Ng explained. 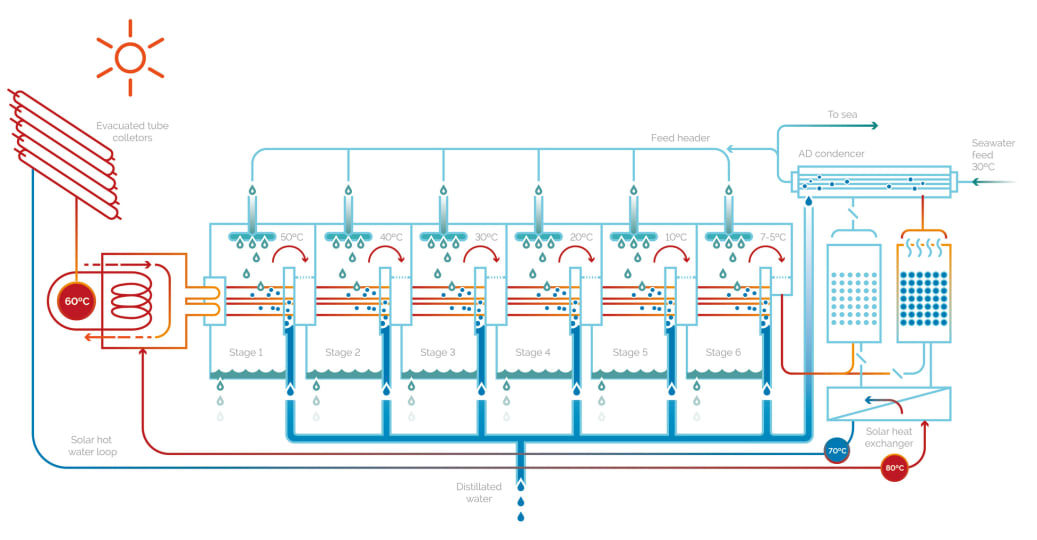 The hybridisation of AD with MED boosts water production to almost double the quantity at the same heat source temperature.

MEDAD collaborated with King Abdulaziz City for Science and Technology (KACST) in its desalination projects. The first 100 m3/day commercial scale project was commissioned in February 2017 at Solar Village, KACST, Riyadh, and it is working successfully with solar and an auxiliary boiler. Another project contract of 2,000 m3/day is expected to be installed with industry partners in Saudi Arabia.

The project was inaugurated in February 2017 by the Minister of Energy, Industry and Mineral Resources and KAUST Board of Trustees vice-chairman Khalid A. Al-Falih and KACST president Dr Turki bin Saud bin Mohammed Al-Saud in the presence of Nadhmi Al-Nasr, who was the interim president of KAUST at that time.

“another project contract of 2,000 m3/day is expected to be installed with industry partners in Saudi Arabia”

MEDAD’s desalination technology won the Aramco-GE Global Innovation Challenge award for seawater desalination in 2015. The award, which is a joint initiative between Aramco Entrepreneurship and GE ecomagination, went to the lowest cost for a cubic meter of water production. The KAUST-based WDRC has a solar-powered and fully automated desalination pilot plant facility that generates 8 to 10 m3 of desalinated water per day. The facility occupies a laboratory space of 200 m2.

The pressure swing adsorption (PSAD) cycle is an innovative method for desorption of vapour from the pore surfaces of absorbent. It exploits the available energy from the low-pressure steam that is otherwise throttled or wasted before entering the MED circuit, overcoming the inherent limitations of a conventional cycle. The use of a thermal vapour compressor (TVC) pressure swing (PSAD) avoids the large footprint needed for the thermally driven desorption. It utilises the low-pressure steam of two to five bars for regeneration of adsorbent. The output steam of TVC is then supplied to the top-brine of MED. The second significant advantage of PSAD hybrid cycle is that it reduces the capital expenditure (CapEx) and the operating expenditure (OPEX) seawater desalination.

Water, energy and environment are inextricably linked when desalting the seawater for drinkable water supply. As more fresh water is produced, more energy is consumed, and concurrently more CO 2 gases are emitted to the ambient.

“In the severely water-stressed Gulf Council Countries (GCC) countries, as defined by the UN where the annual water availability is less than 250 m3 per capita, the availability of water resources at affordable prices will help to strengthen the growth rate of these economies,” said Shahzad.

Water is pervasive to all energy production sectors, such as fossil fuel processing, power generation and irrigation of feedstock crops for biofuels. The practical processes of seawater desalination previously available in the GCC states, including the thermally driven multi-stage flashing (MSF), the multi-effect distillation (MED) methods and the seawater membrane-based reverse osmosis (SWRO), are known to be energy intensive when compared to the ideal or thermodynamic limit (TL) of desalination. 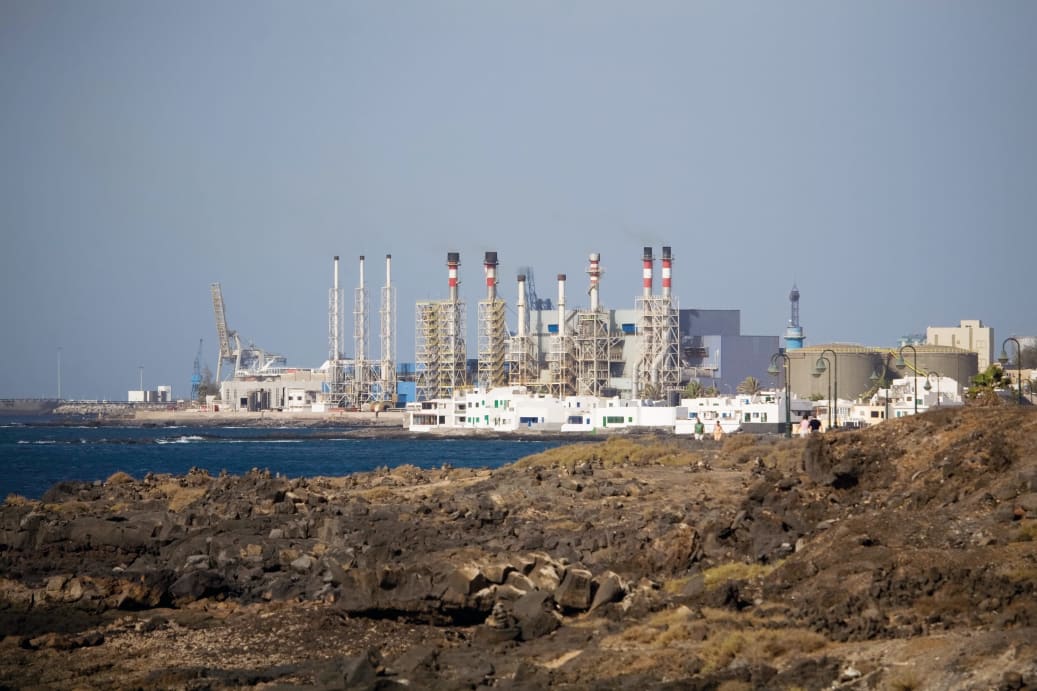 Depending on the source of seawater, its salinity may vary from 3.5 percent to 4.5 percent by weight. For the Gulf region, the specific energy consumption (SEC) for desalination of seawater at 25 degrees C is about 0.78 kWhpe /m3, and at this ideal limit, the SEC is deemed as the primary energy consumption, as it has no dissipative losses. All existing seawater processes are not efficient with respect to the TL, and thus there is great motivation for developing more energy efficient processes for future sustainability.

“One of these innovative approaches is hybridising the processes for seawater desalination,” Shahzad said.

“We develop the integration of a pressure-swing thermos-vapor compressor (TVC-PS) for exploiting the throttled exergy steam, normally practiced in the conventional MED cycle to attain the desired temperature of less than 65°C of top brine temperature,” he added. The introduction of TVC-PS is employed to regenerate the adsorbent during the desorption process of the MEDAD cycle, avoiding the need of a footprint handicapped thermally method of regeneration.

The experimental results tested in the WDRC laboratory pilot TVC operation demonstrated excellent performances of the low pressure driven TVC for regeneration of the adsorbent (silica gel). It can clearly be seen that exergy of low pressure bleed steam at two bars is first utilised for regeneration of adsorbent via TVC and discharged steam temperature can be as high as 70°C. This discharged steam can be utilised for MED heat source. The proposed TVC-PS has an efficient thermodynamic synergy in combination of thermally driven systems.

“The hybridisation of TVC-PS with conventional MED will not only help utilise bleed steam exergy efficiently, but it will also enhance performance by overcoming last stage temperature limitations,” said Shahzad.

In addition to a conventional evaporation process, the hybrid system will also introduce flashing due to low pressure of the system. This additional flashing effect in low temperature stages will boost the water production. The thermos-economics of having a TVC-PS driven MEDAD would yield more than 2.5 times improvement the water production from the MEDAD and without significantly increasing the steam needed for the top brine stage of the MED. “We believed the CapEx of MED can be the same as the SWRO CapEx – if not lower. The corresponding specific unit cost of water may also be lowered by 20 percent due to the enhanced water production yield by the MEDAD cycle,” Shahzad said.

Lulwa Shalhoub is a bilingual journalist who has worked at several media outlets
including Arab News, BBC World and BBC Arabic. She holds an MA in International
Journalism from City, University of London and BA in English Literature and Linguistics
from King Abdulaziz University, Jeddah. She is currently a senior media specialist in
the marketing communications department at the King Abdullah University of Science
and Technology (KAUST).