Capturing flared or vented gas presents an opportunity for oil and gas operators to reduce environmental impact as well as providing the prospect of generating an additional revenue stream.

Approximately five per cent of world annual gas production is being flared or vented worldwide. This is equivalent to about 110 to 140 billion cubic metres (bcm) of gas, and equates to the combined gas consumption of Central and South America in 2013.

The World Bank’s Zero Routine Flaring by 2030 initiative, which was launched in April, puts the impetus on governments, oil companies and development institutions to consider actions to enable economic utilisation of flared gas. Two months later, the scheme had already been endorsed by many large oil-producing countries, including Russia, Norway, Kazakhstan and Angola, and companies including Royal Dutch Shell, Statoil and Total, as well as seven development institutions.

As the oil and gas industry looks for ways to end routine gas flaring and addresses heightened climate change concerns, DNV GL has conducted new research, Natural Gas Capture – Clean and Economic , which examines the viability of alternative solutions and their revenue potential. The conceptual study involved existing oil and gas facilities both on- and offshore, which are often ageing and/or in remote locations and where the associated gas is usually small in volume.

There are challenges to turn waste from flaring and venting into a profitable economic product with sound environmental benefits. Retrofits and transportation of recovered gas to processing facilities can be costly. Without a global cost penalty for emitted carbon, it is often assumed that there are few business benefits to capture the flared gas.

Financial barriers, either real or in many cases simply perceived, can significantly impede the efforts to reduce emissions and this is particularly true for countries with developing economies. Similarly, the geographic setting provides different technical, regulatory and economic drivers and limitations. Access to funding to develop projects and the implementation of technologies is also a major factor.

Notably, audience discussions during the 2nd Annual Gas Flaring Summit in Abu Dhabi in the Middle East, a region where there is increasing impetus to reduce flaring, largely centred around solutions to reduce the amount of flared gas. Little was on the agenda, however, around how flared gas might be captured to generate a revenue stream and provide societal benefit. Such societal uses for valuable resources could have highly sustainable environmental benefits. There are a number of high potential capture and utilisation methods for onshore production in the Middle East, for example, including water desalination as well as gas conversion options and transportation methods.

In markets where there is stronger regulatory emphasis there is obviously an increased impetus for natural gas capture. In the USA, where there are now limits for gas flaring and penalties requiring operators to reduce production in the event of them missing targets, a variety of technological solutions are emerging. Many of the entrepreneurial companies behind these solutions are seeking qualification for their technologies, to mature their viability in the market and gain wider market coverage. DNV GL has been approached by a number of organisations that have read the company’s research and are seeking assistance with this qualification process.

The shale gas market has been impacted further by President Obama’s recent climate plan, which eliminated natural gas from fracking as an alternative to coal power. The climate plan has placed a greater emphasis on wind and solar power, despite an earlier draft indicating that natural gas was an acceptable bridge between coal and renewable energy. Utility companies are also feeling the effect of the changes, having already invested in changing generating plants from coal to shale gas. This emphasis on renewable growth, however, should only serve to increase the environmental and sustainable credentials of natural gas, given the improvements being made to reduce emissions in gas production.

Gas flaring releases toxic components and greenhouse gases into the atmosphere, which can have harmful effects on the health and wellbeing of local communities as well as contributing to climate change.

The World Bank estimates that flaring 140bcm would cause more than 350 million tonnes (mt) of CO2 release into the atmosphere. If this could be harnessed for power, for example, it could produce 750 billion kilowatt hours per year, more than Africa’s entire annual consumption.

Proposed technology solutions exist that are largely dependent on the flow rate, gas compositions and distance to market, and the viability of different technologies will vary accordingly.

The findings demonstrate economically viable solutions that can assist in carbon abatement and develop flare gas for societal use. They include cases covering different small-scale flow rates and gas compositions in four countries: Russia, USA, Algeria and Vietnam.

Existing solutions are mature for large-scale applications, but fewer technologies have been used commercially at small-scale. Although some solutions might be immature for near-term implementation, current applications such as micro LNG, compressed natural gas, natural gas hydrates (NGHs) and conversion methods can deliver significant benefits, and are proving to do so in some cases in certain markets like North America.

The study also proposed novel or less developed solutions that could be applied to capture and utilise associated gas that would normally be flared or vented, and analysed the techno-economics of specific cases at a variety of small scale ranges. It is a complex process to determine suitable technology solutions as alternatives to flaring. The flowchart shows the methodology used to carry out the conceptual studies.

•  Reusable pipes to transport associated gas to other users via pipelines that could be reused, eliminating the use of road or rail transport. These pipes can be taken up after the well is depleted and re-laid elsewhere

•  Batteries to generate electricity to store in batteries for immediate or future use, such as back-up supply

•  Carbon Black, mainly used in the rubber industry for tyre production as well as for plastics and paints, can be produced by incomplete combustion or thermal decomposition of hydrocarbons

The technology solutions and means of transportation explored can also be applied to:

•  Resolve demands in remote areas where there is no infrastructure

A global call to action

According to a report prepared by the National Oceanic and Atmospheric Administration (NOOA) in cooperation with the World Bank-led Global Gas Flaring Reduction Partnership (GGFR), Russia, Nigeria, Iran, Iraq and the United States head the list of the top 20 countries with the highest volume of flared gas, based on the satellite data for the period 2007 to 2011.

Many of the novel techniques explored in the DNV GL study, particularly for small-scale capture of natural gas, are becoming more conventional in the USA, but have yet to be adopted elsewhere. Innovation is being largely driven by the US shale industry.

Many of the wells in North Dakota’s Bakken basin are already implementing affordable alternatives to flaring through connections to gas-gathering networks. These handle associated liquids-rich gas from more accessible drilling areas that are being used to produce propane, methane, butane, natural gasoline and industrial feedstock ethane.

In western Siberia, Russia, there is growing investment in gas separation plants to ship heavier components to market, while putting lighter products, mostly methane, into smaller power plants that can be returned back to the oil production site.

As mentioned earlier, in the Middle East the greater focus is on flare reduction through operational improvements such as valve management, improved processing and equipment modification, rather than actual natural gas capture. While regulatory targets are set in some Middle East countries, with Qatar being the most stringent, this still allows for a significant amount of flaring to take place. Unlike the USA, the Middle East does not have penalties in place to scale production if flare targets are not achieved.

Although support for the World Bank’s Zero Routine Flaring by 2030 initiative is gaining momentum, there is still a need for greater awareness and demonstration of the technical and economic possibilities, beyond operational modifications, to encourage commitment from operators and policy makers. As such DNV GL has been developing a decision support tool to screen options for developers and operators and facilitate a quick evaluation of the most viable technologies prior to more detailed feasibility studies.

New technologies – or smarter uses of existing products and tools – are one answer to generating new value chains and revenue streams. Formidable, non-technical hurdles, however, include financial investment as well as time and resource commitment, alongside the requirement for regulatory and legal frameworks, if the oil and gas industry is serious about ending routine gas flaring and addressing heightened climate change concerns.

Major political force – such as the Obama administration call for action on climate change – will be a vital component to progress. Although critics of Obama’s plan are determined to oppose it, the USA has already made progress towards reaching its emissions targets. Obama’s plan proposes a 32% cut in carbon emissions from power plants by 2030 on 2015 levels. Emissions from power plants have already fallen, however, by 15% between 2005 and 2013 without regulatory incentive. Tapping into the opportunities to create value from flared gas will drive emissions targets further, in the USA and globally. 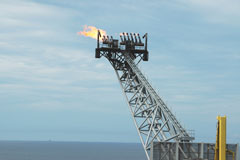