By Amy Parekh-Pross and Paul Walker

Oil spills and contaminations that have resulted in disastrous economic and environmental damage that may last for decades have made the news headlines across the world in recent years. The lawsuits surrounding them have proved just as newsworthy, with billions of pounds of compensation being paid out by those found to be responsible.

Amy Parekh-Pross and Paul Walker discuss the environmental forensics investigations that are necessary when such incidents happen, in order to assist the courts to determine responsibility and allocate clean-up costs.

Environmental forensics first emerged in the US as a result of potential liability and litigation, and it is a rapidly developing field in the UK.

In order to develop defensible scientific and legal conclusions regarding contamination release into the environment, systematic and scientific evaluation of physical, chemical and historical information is required. Environmental forensics does just this and can be used to deduce the source, age and type of contaminant released. Often this will require the identification of common fuel types such as gasoline, kerosene, diesel, motor and lubricating oil.

The applications of environmental forensics are wide ranging, from a homeowner who finds an oily residue at the bottom of their garden that is destroying their plants, to major oil spills killing thousands of animals and resulting in billions of pounds of damage.

The techniques within environmental forensics can be used proactively or reactively, depending upon the situation in hand. The following two examples from transport infrastructure projects explain this well.

In the first instance, a train depot was sited next to a scrap yard. Close by, connected drains from the two sites were leaking and found to be contaminating the land with oil. Samples were taken from the drains and surrounding soil and, after forensic examination, were found to contain a mixture of relatively fresh diesel fuel oil as well as lubricating oil – evidence that could point to either company.

High performance liquid chromatography was then carried out on the extracted free oil to determine the presence of tax dyes. It was found that the diesel contained neither the red Sudan IV tax dye, nor the yellow Euromarker, so it could not be rebated fuel from the train company’s site. As a result, it was found that the contamination originated from the scrap yard and as such it was responsible for the clean-up costs.

In the second example a company wanted to ascertain the level of previous oil contamination on a new site they were moving to, in order to limit any future liability. Environmental forensics techniques were used to analyse samples from the site, in order to identify any contaminants present and in what quantities they appeared. This information could then be used in the future to differentiate pre-existing contamination from any new spills.

The following case study unearthed contamination on a housing development. A housing developer carrying out a site investigation in a rural area came across a large fuel contaminated area. There were two suspected sources – a commercial site with several heating oil storage tanks and a former petrol station.

Samples were taken from various locations, including from the most contaminated areas on the construction site and in close proximity to the suspected sources – something which is essential to investigations of this type. The samples were then submitted to the laboratory for total petroleum hydrocarbon (TPH) forensic analysis.

Due to the complex nature of fuels, the testing was conducted using a flexible tiered approach. Level One Forensics, using gas chromatography-flame ionisation detection (GC/FID), were employed to screen all the samples for hydrocarbons and to provide cost-effective data on fuel concentrations and patterns. The data generated was then utilised to match suspected sources with contaminated sites. An examination of the fuel patterns produced by the detector response revealed that the samples from the contaminated site and the commercial site were from distinctly different, unrelated petroleum groups. The predominant contamination at the site in question was diesel and with no traces of heating oil were found, ruling out the commercial site as a suspected source.

Samples from the former petrol station were then compared to those from the contaminated site. It was noted that both sites produced a response in the diesel range of the chromatogram, but the match was unclear.

Due to this the samples were inspected further by means of Level Two Forensics, carried out using gas chromatography-mass spectrometry (GC/MS). This technique enabled the ascertaining of petroleum specific compound groups and generated ‘chemical fingerprints’. Using these techniques, extracted ion investigations were undertaken, with m/z ions 57 and 85 extracted to assess for aliphatic hydrocarbons. Similarly, the m/z ion 191 was extracted to assess for the presence of Hopane and other Pentacyclic Triterpanes (Biomarkers).

The ‘chemical fingerprints’ of the suspected petrol station source and contaminated site were compared and displayed good compound correlation. This evidence was then built upon by assessing additional chemical groups such as alkylbenzenes, polyaromatic hydrocarbons (PAHs), dibenzothiopenes and other biomarkers.

Biomarkers play a very important role in characterisation as they are naturally occurring, ubiquitous and stable hydrocarbons that are resistant to weathering, occurring in crude oils and most petroleum products. Common biomarkers used in fingerprinting include steranes, hopanes and triaromatic steroids.

Following an evaluation of all the evidence including the results from the GC-FID screening, extracted ion chromatograms of numerous compound groups and the consultant’s report, it was concluded that the former petrol station was the most likely source of the heavy fuel contamination found on the construction site.

It was also determined that the contamination was relatively fresh and not historical, as it only showed low levels of biodegradation. The samples showed a loss of light end n-alkanes which are among the most biodegradable hydrocarbons – readily broken down and preferentially depleted from environmental samples. A degradation of around level 2 was determined based on the Volkman scale. It should be noted that the time it takes to achieve the weathering/biodegradation levels is site-dependant and requires consideration of a number of environmental factors.

Using a multidisciplinary approach including fuel forensics techniques, the evaluation of geological and hydrogeological conditions as well as site history, meant that in this investigation multiple ‘lines of evidence’ could be generated in order to build a compelling case. By using innovative analytical techniques, such as chemical fingerprinting, it was possible to gain sufficient specificity to determine the type of fuel present, the source and the degree of weathering.

The future for environmental forensics

Environmental forensics techniques are continuously evolving, with advances in Compound Specific Isotope Analysis (CSIA), statistical tools and comprehensive two dimensional GC (GCxGC), which have a remarkable capacity to separate and identify organic compounds. These developments will allow forensic chemists to carry out scientific investigations alongside consultants and provide increasingly robust defensible data that will serve to solve cases of oil pollution.

Published: 27th May 2015 in AWE International 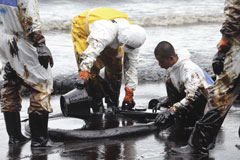