Both PFOS and POFA have been manufactured in industrial quantities since the 1940s, but it is only in recent times that these compounds have been noted to be of interest environmentally – indeed they have only relatively recently been added to the Water Framework Directive Environmental Quality Standards. An emerging contaminant is a chemical which is characterised by a perceived, potential or real threat to human health and/or the environment; or by a lack of published health standards. The contaminant may also be classified as emerging as a new pathway to humans is discovered, or a new detection method or technology becomes available. PFOS and PFOA are classified as emerging contaminants as the meet a number of these criteria, though their environmental legacy began over 70 years ago.

PFOS has seen widespread use in foam fire extinguishing material, water proofing and stain resistant coatings for fabrics and even food packaging. PFOA is similarly used as an aqueous dispersion agent in water, oil and stain repellent products and fabrics. Both are added to aviation fluid to increase the level of fire resistance of the mixture.

Perfluorooctane sulfonic acid (PFOS), its salts and perfluorooctane sulfonyl fluoride (PFOS-F) are listed as persistent organic pollutants (POPs) in the Stockholm Convention. Environmentally these compounds are very persistent and undergo substantial bioaccumulation and biomagnification. Unlike other POPs in listed in, they bind to proteins in the blood and to the liver rather than to fatty tissues.

The environmental fate of perfluorinated compounds is only just starting to be understood. We know the compounds undergo long range transportation and have been found in water and animals in the Arctic. PFOS tends to remain within the ground water rather than sorbing to soil, whereas PFOA persists in the soil matrix and levels have been found to be stable for over 30 years, with migration downwards towards the groundwater. In plants both are found at higher levels in roots than fruits, the primary exposure route to humans at present is through food.

Worldwide, levels of PFOS and PFOA in waters are monitored, both for environmental reasons and also human health. The critical levels vary widely, and within the UK it should be noted that the environmental quality standards for surface waters are substantially lower than acceptable levels in drinking water.

PFOS and PFOA rarely feature in soil analysis from site investigations unless they are known contaminants of concern. Few guideline values exist, a selection of which are shown in the table below:

The profile of PFOS and PFOA environmentally is becoming more prevalent and analytical techniques are emerging to deal with analysing these compounds in a wide range of matrices and over several orders of magnitude depending on the level of interest as well as background levels present.

The chemistry of PFCs

In order to understand the complexity of the situation, first the chemistry of the compounds need to be understood. Perflouorinated compounds (PFCs) are a group of compounds found in organic chemistry that are made up from a long chain of carbon atoms with Fluorine atoms attached to them instead of Hydrogen atoms that most organic molecules usually have. Fluorine is a very electronegative element, meaning that it has a tendency to draw electrons towards it and consequently it forms a very strong chemical bond when attached to Carbon in a molecule. With PFCs containing multiple C-F bonds that are difficult to break these compounds tend to be very stable and difficult to break down. These molecules can have a variety of functional groups attached to the end of them, which will dictate the chemical properties of the compound. PFCs with a carboxylic acid group attached to the end are known as Perfluorocarboxylic acids and two common examples of these are Perfluorooctanesulfonic sulphonate (PFOS) and Perfluorooctanoic acid (PFOA).

Once the scale of the environmental contamination by these compounds was discovered it became essential that ways were found to test for them so that their presence and the quantities that they were found could be monitored. The chemical properties of a compound will dictate which type of analytical technique will be most effective with the two main options available to organic chemists being gas chromatography (GC) or liquid chromatography (LC). The low volatility and the high solubility of perfluorinated compounds means that liquid chromatography forms the basis of the most commonly used methods for their detection.

Liquid chromatography is a technique that allows the individual components within a solution to be separated. The sample of interest is combined with a liquid, normally made up of a mixture of water and organic solvents to form what is known as the mobile phase. This mobile phase that contains the dissolved sample is then passed through a stationary phase that is designed to interact with compounds that may or not be present. The different ways in which compounds interact with the stationary phase will dictate how quickly they do or don’t pass out of the other end and it is these differences in times that create the separation that is required. LC methods are normally optimised to focus on specific compounds or groups of compounds based on the chemical properties of the molecules to ensure the best possible separation. Factors such the polarity or PH of the mobile phase or the size and material used for the stationary phase are just a few examples of the variables that can be adjusted to help achieve the most effective results.

Separation of perfluorinated compounds from a sample can be successfully achieved using chromatography, but it is then important to be able to observe what has actually been separated. An LC system will be paired with a detector that will enable the mixture of separated compounds to be identified. There are a large number of different detectors available all with advantages for specific applications, but for the purposes of PFOS/PFOA analysis the use of a mass spectrometer (MS) to form an LC-MS is a widely used combination. The LC separates the components within a mixture so that they are not all sent to the MS at the same time, making it easier to look at them individually instead of having to make sense of the data in one big complex mixture.

Mass spectrometry involves forcing the molecules within a sample to be broken apart and then to lose or gain electrons resulting in the creation of positive or negatively charged ions. These ions are then transferred further into the mass spectrometer where they are detected as a mass to charge ratio, which is displayed in the form of a mass spectra. All compounds will produce unique mass spectra as molecules, which will break down and ionise in different ways based on their chemical structure. This means that mass spectra can be used almost like a fingerprint that can be compared to data obtained from sample analysis to confirm whether or not a specific compound is present.

LC-MS can be used to determine whether PFOS or PFOA is present in a sample but it can also be used to establish how much is there. This can be achieved by analysing a set of calibration samples containing pre-determined concentrations of PFOS/PFOA and then comparing the levels found in real samples to them. Over time analytical laboratories have been required to develop new ways to look for these compounds at lower and lower levels. This has been made possible due to advances in the instrumentation available to perform such analysis, a good example being the introduction of LC-MS/MS. However, even with the development of instruments capable of looking at low levels they still aren’t necessarily able to analyse samples by simply injecting them directly.

Samples are often taken through what is known as an extraction procedure prior to their introduction into the LC-MS system. One example of this is a technique called Solid Phase Extraction (SPE), which involves passing a water sample through a cartridge containing a specially designed stationary phase that will trap compounds of interest from the sample while allowing the sample matrix to pass through. The analytes that have been retained on the stationary phase can then be removed by washing with a carefully selected eluent, normally a solvent such as Methanol that is collected for analysis. SPE is commonly carried out on samples separately before it is analysed on the instrument however equipment is now available that allows the process to be carried out online as part of the LC-MS process.

Taking a sample through an extraction procedure can have a number of benefits. Firstly it can help clean up the sample by removing physical materials such as sediment that may be present and also some unwanted dissolved compounds. Injecting clean samples into an LC-MS will normally result in a cleaner, easier to interpret set of data as well as reducing the risk of dirtying or damaging the instrument. Sample extraction can also help a lab to look for these compounds at lower concentrations. What essentially happens is that all the PFOS/PFOA is removed from a larger volume of sample and is transferred to a much lower sample volume, consequently increasing the concentration of the sample that is going to be analysed.

A word to the future

Perfluorinated compounds make a good case study in liquid chromatography, with a variety of extraction and analysis and detection techniques available depending on the matrix and analyte level, but the ubiquitous nature of these compounds can make analysis challenging. Laboratories are learning to deal with these issues and as the profile of perfluorinated compounds rises within the environmental sector, both the understanding of their behaviour in the environment and their suitability to current and emerging methods of analysis is constantly improving. 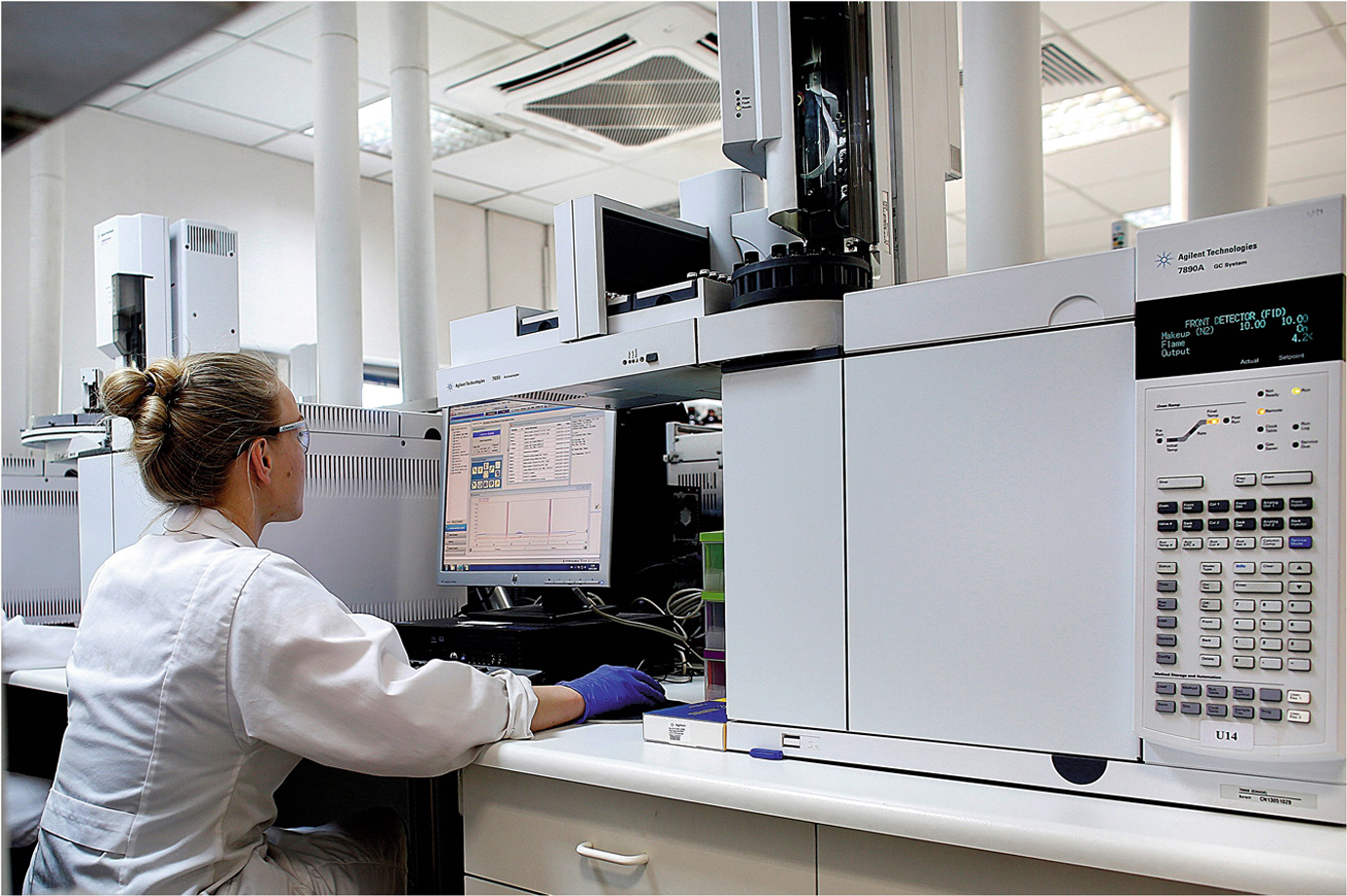