By Dr Yevgen Nazarenko and Dr Parisa A. Ariya

Does the presence of snow change the fate of air pollutants in the environment and their impact on human health?

Air pollutants come from different sources. In urban environments, they are primarily emitted from combustion in vehicles and heating systems, construction and industrial processes. After emission, air pollutants participate in physical and chemical processes, which influence how they move within the environment and can also transform them into other compounds. As a result, their impact on human health and the environment depends on the environmental conditions. Characterising the processes that pollutants are involved in requires advanced experimental and analytical techniques applied in field measurements and laboratory experiments. The approach we describe here allows simulating interaction of air pollutants with natural snowpack in the laboratory. It can be useful for studying the fate of air pollutants from vehicles, heating furnaces and other sources in simulated winter conditions using a compact and relatively inexpensive temperature- controlled chamber system.

When people think about the importance of snow and ice for the health of our Planet, they mostly imagine the vast Arctic and Antarctic landscapes, Greenland and glaciers. While snow and ice in these regions are indeed critical determinants for the local and global environment, few people live there. However, human population is very dense in many parts of the world where snow is seasonal. The United States, Canada, Europe, Asia and some territory of South America experience winters with regular snowfalls. Snowfalls lead to often prolonged periods when the ground is covered with a snowpack, which undergoes partial or complete melting intermittently. It is a complex system where pollutants can accumulate, transform and be emitted from. Our research on interaction of air pollutants with snow highlights its role in altering air pollution and influencing the fate of pollutants in the urban environment.

Air pollutants contribute to respiratory, cardiovascular, neurological diseases and cancer, reducing life expectancies around the world (Brauer, 2016; Kampa and Castanas, 2008; WHO (World Health Organization), 2013, 2014). The fraction of the smallest aerosol particles below 100 nm in diameter, called nanoparticles, has been the focus of most recent research on air pollution. Nanoparticulate air pollution has already been shown to contribute to the burden of disease in children and adults (Chen et al., 2016; Slezakova et al., 2013; WHO (World Health Organization), 2013, 2014) and the premature death of children around the globe (Heinzerling et al., 2015).

Air pollutants come from a variety of sources (Figure 1), and are generated in two forms. The first one is the gaseous phase, made up of molecularly dispersed pollutants; and the second one is the aerosol phase, made up of airborne particles in a wide size range – from a few nanometers (nanoaerosol or ultrafine particles), through microscale PM2.5 and PM10, to dozens of micrometers (dust). After emission, these pollutants find themselves in a complex environmental system comprised of a wide variety of atmospheric constituents, land and water body surfaces, and the built environment.

These natural and anthropogenic environmental elements and factors have the power to substantially affect atmospheric and interfacial processes involving air pollutants. Snow is one of these factors, largely overlooked due to its variable nature, and complexity of research requiring operation of equipment at subfreezing temperatures in the field and temperature and humidity control in the laboratory. In fact, most air pollution research has been performed during the warm seasons or in areas with warm weather year round. At McGill University, we developed experimental methodology to study snowpacks in the laboratory using refrigerated chamber systems (Figure 2) (Nazarenko et al., 2017; Nazarenko et al., 2016). 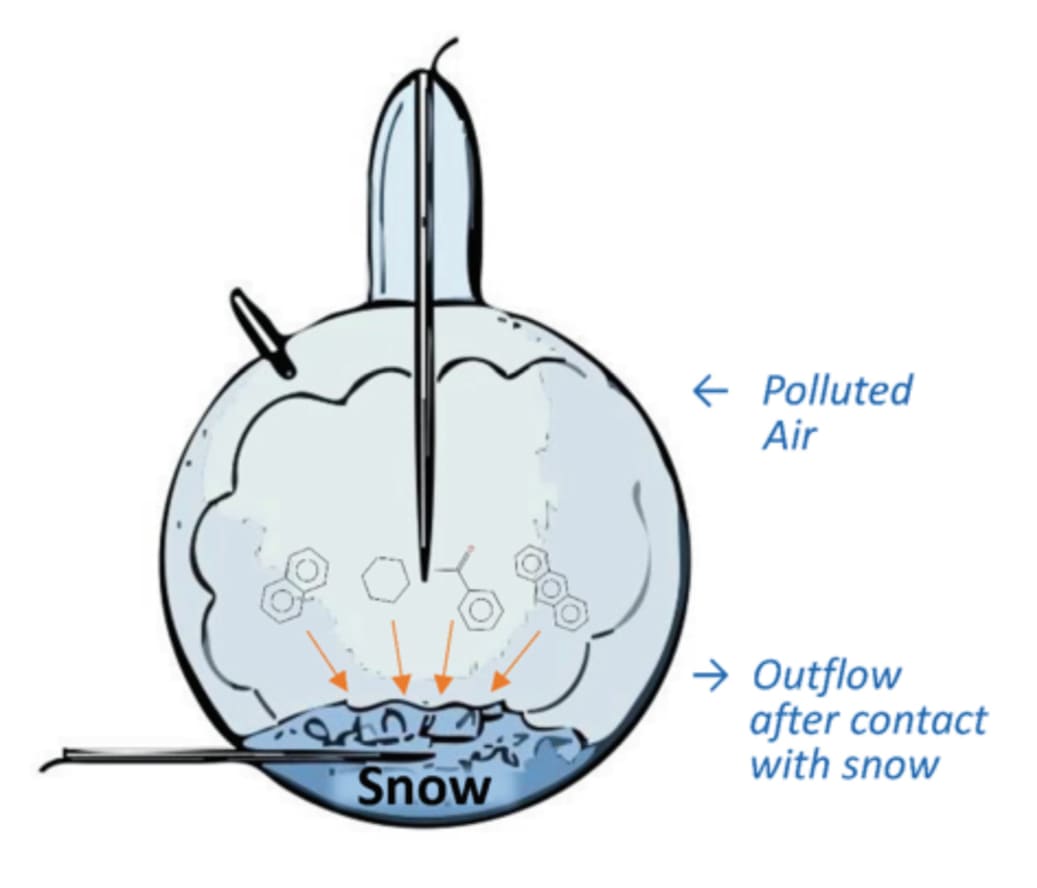 Figure 2: Temperature-controlled chamber – part of the experimental setup, in which interaction of air pollutants with snow can be studied

Several gaseous compounds are also transformed via photochemical reactions in the atmosphere, forming particulate matter that is referred to as secondary aerosols. Our focus so far has been on exhaust of gasoline-powered internal combustion engines. Different engine operation regimes, fuel formulations, temperature, relative humidity, and most recently light illumination are the factors that can be controlled in such chamber systems, and therefore, their influence on pollution-snow interactions can be studied in detail.

We showed that a substantial amount of a large variety of air pollutants deposit in the snowpack. These pollutants include and are not limited by the most abundant volatile organic compounds (VOCs), known as BETX (benzene, ethylbenzene, toluene, and xylenes), as well as a wide range of polycyclic aromatic hydrocarbons (PAHs). These and other organic pollutants can be identified and quantified using gas chromatography – mass spectrometry (GC-MS), a technique suitable for analysis of both polluted air, as well as snow meltwater. The instruments (Figure 3) for performing this type of analysis are costly, but cooperation with academic and government laboratories is possible for smaller organisations, and many commercial laboratories offer GC-MS analysis at reasonable cost per sample. 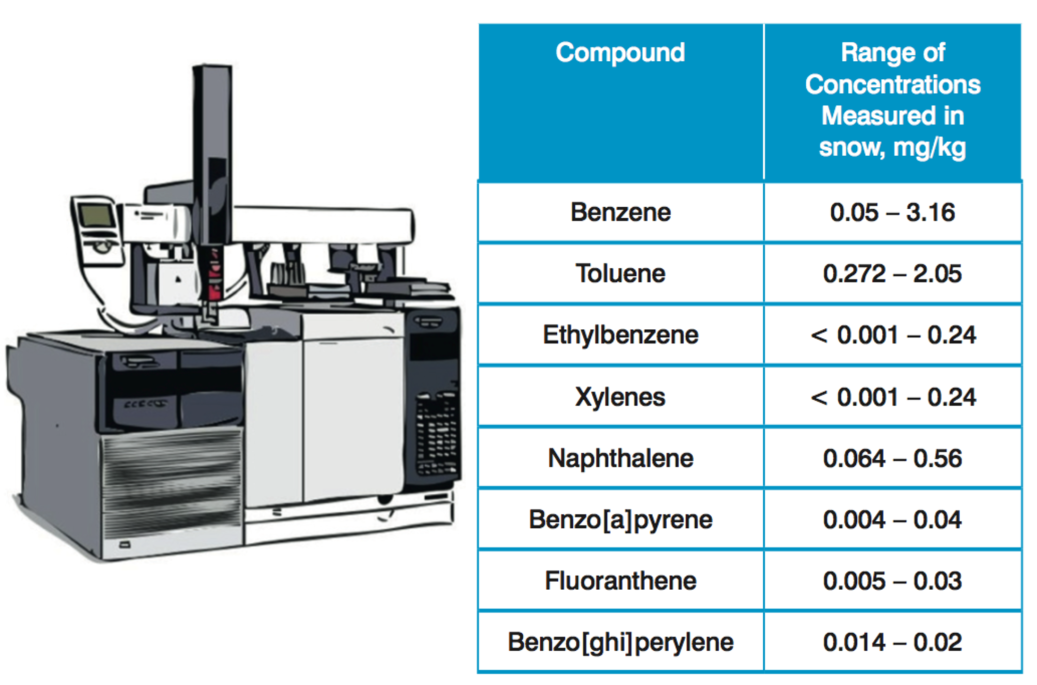 “organic pollutants can be quantified using gas chromatography – mass spectrometry, a technique suitable for analysis of both polluted air, as well as snow meltwater” 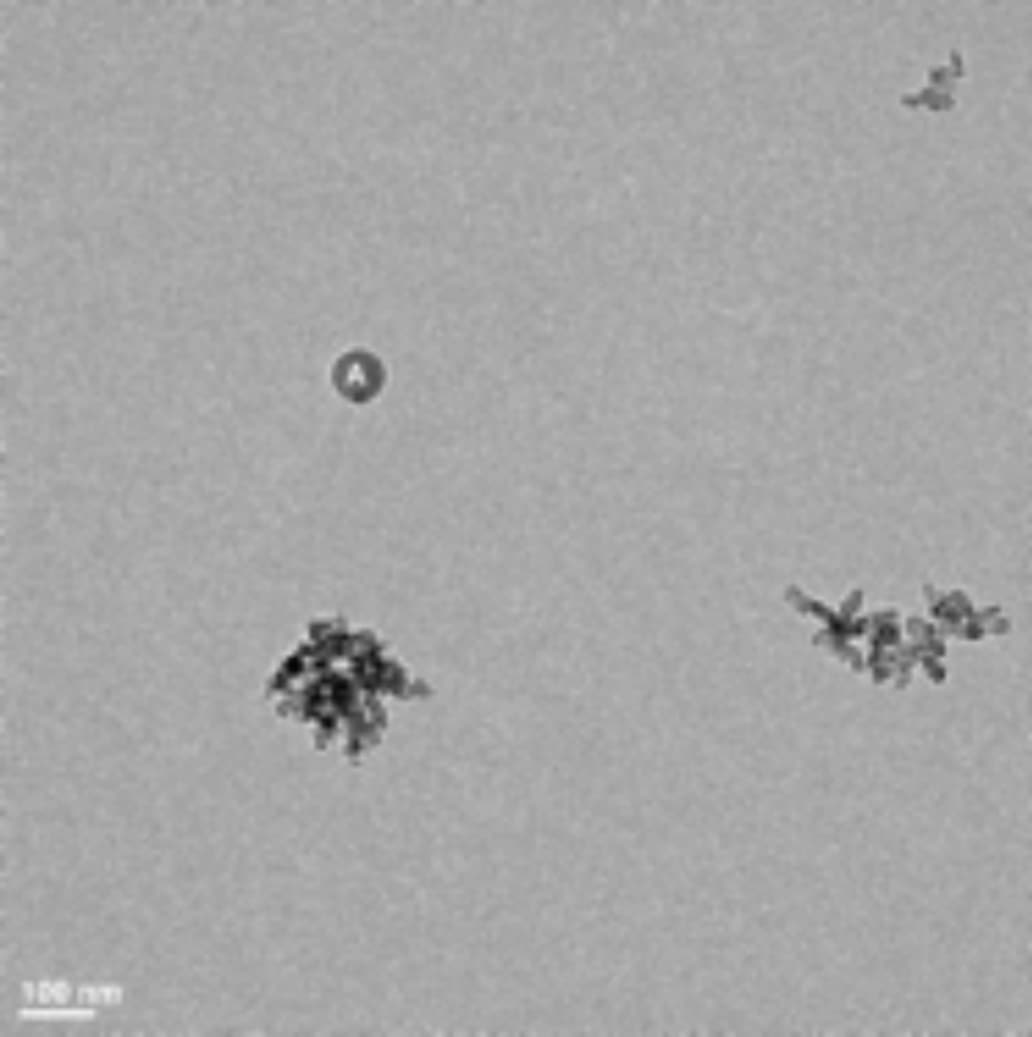 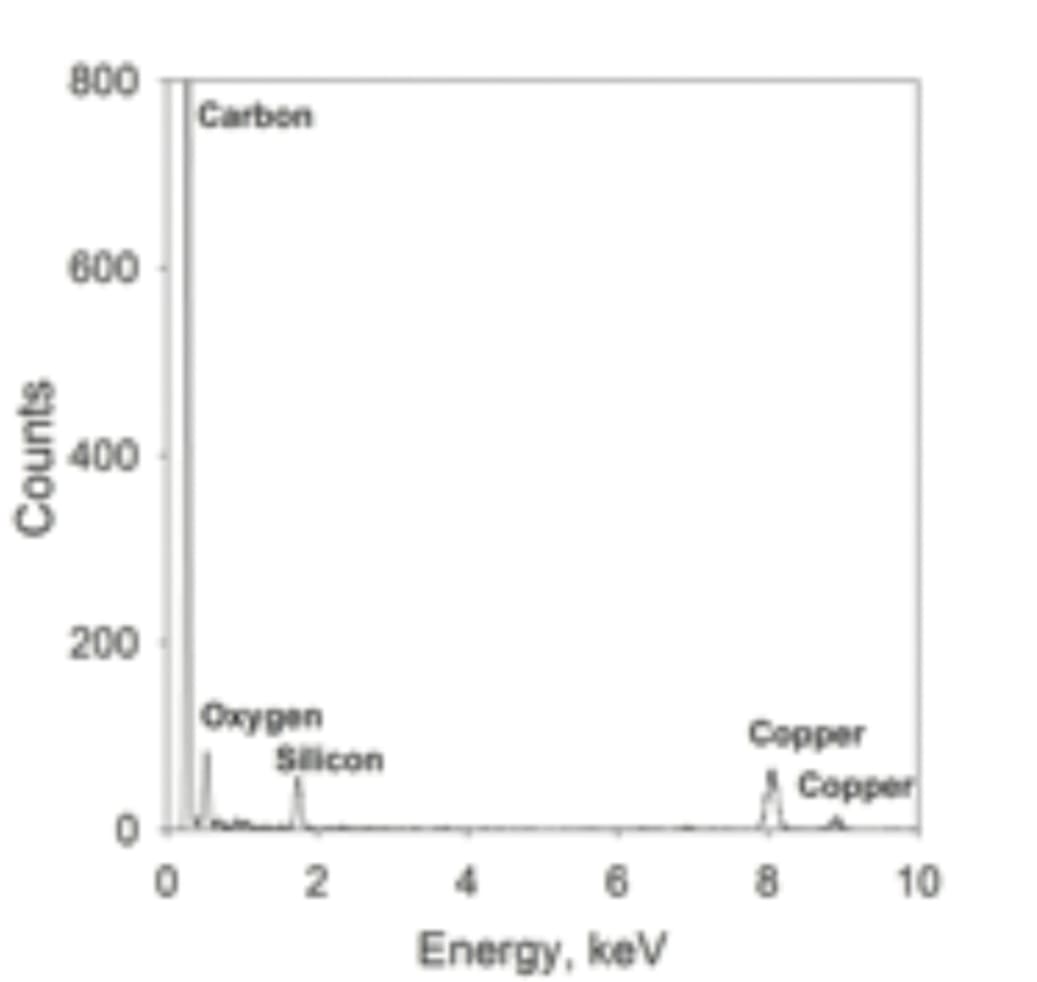 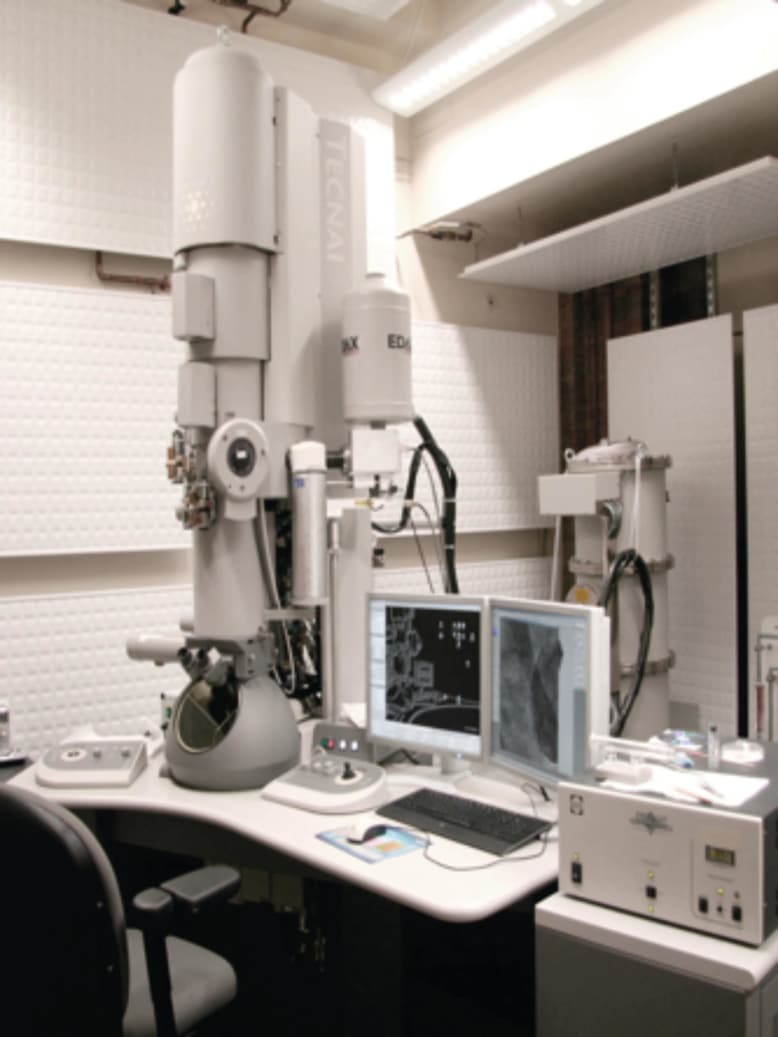 For imaging using electron microscopy, snow meltwater containing particles can be deposited directly on the substrate (film-coated grids or plates). It is important to note that transmission electron microscopy (TEM) is only suitable for analysis of electron-contrast particles, stable under the highly energetic electron beam. TEM is a valuable technique for analysis of carbonaceous particles, abundant in combustion emissions, and we successfully used it to confirm that snow absorbs such particles from polluted air. Particles made of organic compounds are generally hard to analyse using this technique. Nevertheless, it is sometimes possible to stain samples to make organic particles visible. Scanning electron microscopy works better to determine three- dimensional shape of particles and agglomerates, but currently has lower resolution than TEM, so only a fraction of more expensive higher- resolution scanning electron microscopes allow characterization of particles and structures at nanoscale.

“when air temperature is lowered, or when snow is present, the abundance of different exhaust-derived aerosol particle sizes changes towards a higher relative concentration of smaller nanoparticles” 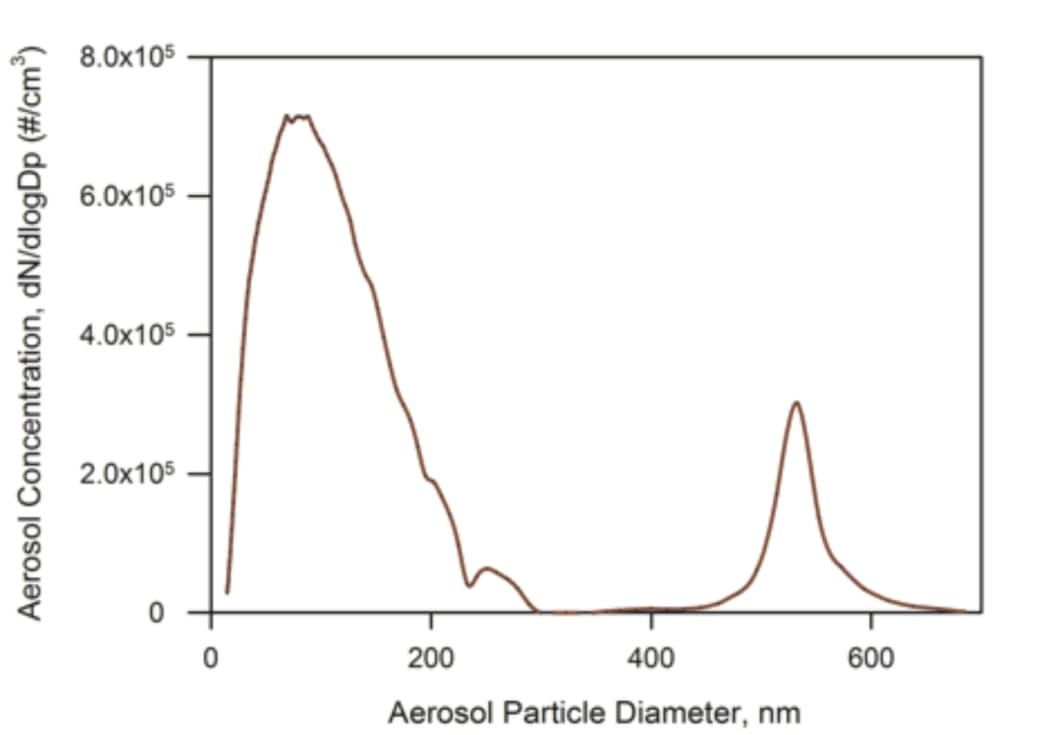 For airborne particles, electrostatic precipitation can be used to capture them directly on the substrate. Aerosol particles can also be measured in the air using real-time aerosol sizers, such as scanning mobility particle sizers, used for measuring nanoparticles (1 – 100 nm) and small microscale particles (0.1 – 1 μm), and optical particle sizers, used for particles larger than about 0.3 – 0.5 μm. Depending on the instrument, aerosol size distributions of varying resolution can be obtained with one second to one minute time resolution (Figure 5).

Using real-time aerosol sizers, we found that when air temperature is lowered, or when snow is present, the abundance of different exhaust- derived aerosol particle sizes changes towards a higher relative concentration of smaller nanoparticles (Nazarenko et al., 2017; Nazarenko et al., 2016). This is a very important finding, as basic research on toxicity of particles shows substantial differences in adverse biological effects depending on the size of inhaled particles.

Our research provides evidence of substantial effects of seasonality on the potential fate of exhaust pollution from internal combustion engines in northern climates where snow is an element of the environment for at least part of the year. We also find that when it comes to pollution from vehicle exhaust, the engine operation regime has substantial influence on abundance of different pollutants. These pollutants are then in turn influenced by environmental factors, such as freezing temperature and snow.

“fuel producers, engine designers and vehicle manufacturers, and makers of heating furnaces could use refrigerated chamber systems to design their products so that they pollute less in winter”

Fuel producers, engine designers and vehicle manufacturers, and makers of heating furnaces could use refrigerated chamber systems to design their products so that they pollute less in winter. Basic research scientists and government environmental protection agencies should focus on further research and monitoring to better understand how seasonality and urban snow alter the fate and effects of air pollutants, including exhaust pollutants, on the environment and human health. This research could help identify the most harmful and persistent pollutants as they cycle and undergo transformations in the air, snowpack, meltwater, and soil. These pollutants should be targets for reduction in formulations of gasoline, and in optimisation of engines and other combustion systems, as well as exhaust aftertreatment.

The newly discovered way of how exhaust pollutants move and change throughout our environment adds to the vast existing list of routes of their dispersal and accumulation in the environment and human exposure to them. So there is strengthened motivation and now this new methodology to smartly identify and target specific pollutants of most concern in winter when reducing emissions from cars, trucks, buses, public transit, freight, utility, private vehicles, heating furnaces and industrial sources. This research also provides information and evidence to guide the development of more comprehensive environmental policies and regulations, tailored to cold climate.

Parisa A. Ariya is the holder of James McGill Professorship of Chemistry and Atmospheric and Oceanic Sciences and the director of the Atmospheric and Interfacial Chemistry Laboratories at McGill University (Canada). Her laboratory’s mission is to explore major fundamental and applied research questions on chemical and physical processes involving aerosols, as well as organic and metal pollutants of relevance to the Earth’s atmosphere and its interfaces. She has over 130 peer-reviewed publications (books, articles and patents), has severed/led various international editorial, granting, policy advising, industrial boards and agencies. Dr Ariya had the privilege of mentoring over 150 highly qualified personnel in her laboratories, and was honoured to receive several scientific awards and distinctions.

Dr Yevgen Nazarenko is a postdoctoral researcher at the Department of Atmospheric and Oceanic Sciences at McGill University (Canada), working with Professor Parisa A. Ariya at the Atmospheric and Interfacial Chemistry Laboratories.
His research has focused in several domains of environmental sciences, including nanosafety, aerosol science, inhalation
exposure, development of new environmental sampling and analytical techniques, and fate of air pollutants in the environment. He has over 20 published and submitted peer-reviewed publications, has served as an invited speaker and panellist at several professional events and in various leadership positions in professional organisations in the environmental field and is recipient of several major scholarships and awards.