Forecasting air quality is a complex challenge which has seen considerable development over the last decade, with the latest updates in September. Some of the improvements are thanks to the incorporation of more observational data to establish the initial state of the model (see main image), with observations also key in building and evaluating the forecast models.

In this article we’ll take a look at what forecasts are now available, and what their limitations are. We go on to explore how current and historical observations could be used to help ascertain what future decades may hold.

The benefits of a multi-model ensemble

Every forecasting model aims to capture the key physical processes. These are so complex that some simplification is required, and the way each model goes about the simplification leads to variety in structure between the models, and inevitably introduces errors into the forecasts. Calibration of the models is done using observations, so the model skill is limited, to some extent, by the observations available.

A 2010 study by DEFRA (Derwent et al, 2010) evaluated the state of air quality models to forecast at that time, and observed that ‘gross simplifications have been made because we lack the required understanding or adequate measurement techniques or because we are unable to identify the nature of the processes actually occurring in the real world on the scales required for our models’.

Fortunately, progress has been made since 2010, although simplification is still required in order to get an operationally functional model.

“calibration of the models is done using observations, so the model skill is limited, to some extent, by the observations available”

The Copernicus Atmosphere Monitoring Service (CAMS) provides global air quality forecasts from seven atmospheric chemistry models. Those for Europe are out to four days, updated twice a day, on 0.1° x 0.1° grid (approx. 10km). The CAMS update on 26 September 2017 included changes to include more Aerosol Product satellite data (Figure 1 shows the increase in satellite PMAp aerosol observations), as well as moving to the same operational forecasting system used for ECMWF global weather forecasts, which has aerosols and chemical species interacting with each other in the forecast model. See Eskes et al (2017) for a write up on the improvements seen. Using the output from these seven different forecast models, ensemble prediction system meteograms (EPSgrams), or ‘box and whisker’ plots, can be compiled, such as that in Figure 2, which shows the spread of forecasts for ozone concentration at Rome. Instead of a simple deterministic forecast, we now have a range of possible outcomes. For some forecast times there is considerable uncertainty, but little likelihood of exceeding the threshold (e.g. 1800h on Wednesday 4 October). A few of the time steps (around midday on Wednesday 4 and Thursday 5 October) show there is some potential for the ozone concentration to exceed the threshold level. Ideally, the extent of the box and whisker plots would indicate the level of skill, or uncertainty in the forecasts. This is not always the case, for reasons we will not branch off into here.

Figure 2. EPSgram for Ozone concentration at Rome. Forecasts are for every three hours out to four days, and are initialised at midnight (GMT) on 4 October 2017. Source: Copernicus Atmosphere Monitoring Service

How much better is it to use the median forecast than any individual model? Figure 3 shows the root mean square error (RMSE) for Europe for each of the seven models, and the median (labelled ENSEMBLE). We can see that whilst the ensemble median is not always the most skilful (lowest RMSE), it often is, and over any week proves to be the best choice. By taking the median value from a variety of models with differing structures, the most extreme are filtered out. 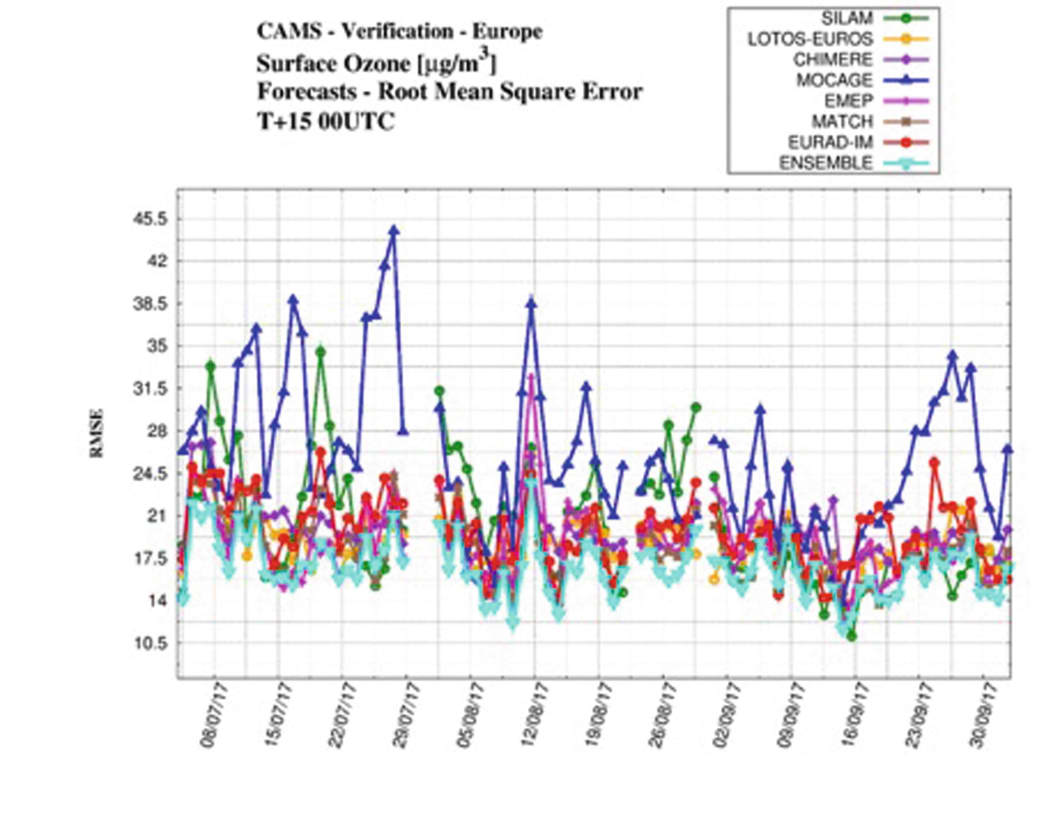 Figure 3. RMSE error for CAMS model forecasts for surface ozone at 15-hour lead time, for July through September 2017. Source: Copernicus Atmosphere Monitoring Service (the circle is added here, and explained in the text).

There are times, such as 12 August 2017 when none of the models do very well. This is often due to systematic model error – the atmosphere is evolving in a way the models are unable to reproduce, perhaps because there is a physical process that all the models have assumed unimportant but that is, on this occasion, dominant.

Over time, forecast centres aim to address these deficiencies, often by comparing model output with surface observations, as in Figure 4. Surface observations are also vital for improving localised forecasts, as detailed by Neal et al (2016).

Monitoring Atmospheric Composition and Climate (MACC) III has got funding from the EU’s Horizon 2020 to further improve air quality forecasts.

From forecasting four days ahead to considering four decades ahead 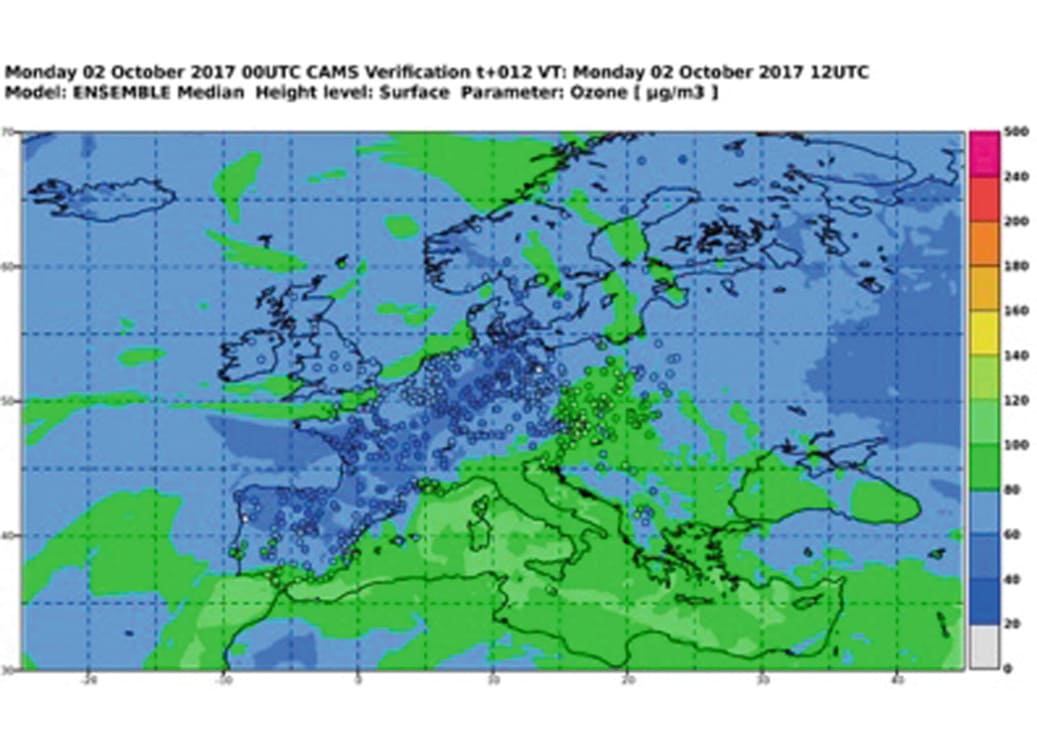 In June 2017, the Financial Stability Board published their Recommendations of the Task Force on Climate-related Financial Disclosures, see FSB (2017), and more than 100 companies publically supported them. Increasingly businesses will be expected to consider how climate change is likely to affect them, and present to investors the expected effects on their PnL.

Weather affects many businesses, and the first step is understanding how, which we leave for another discussion. Once the weather sensitivities of a company are known, how can one use the climate predictions available to work out the impact on profitability?

“the atmosphere is evolving in a way the models are unable to reproduce, perhaps because there is a physical process that all the models have assumed unimportant”

Available climate predictions tend to be for a limited number of variables, and on fairly coarse resolutions, which can be seen as a barrier to their use, but may actually encourage more appropriate use of the data available.

Weather regimes may provide the key to decadal forecasts

Regimes are weather patterns which occur in the atmosphere with some regularity. Forecasting regime transitions is a topic of active research, both in operational global numerical weather prediction models used to forecast out to 15 days, and in climate prediction models. If climate models are to be useful, they need to capture both the regime transitions, and the changing frequency of the various weather regimes as time evolves.

The good news is that regime transitions may be more predictable than small scale processes. If we can identify what weather regime is associated with an extreme event of interest, then we can use information from the climate prediction models about the future frequency of that regime to deduce what changes are likely.

“if climate models are to be useful, they need to capture both the regime transitions, and the changing frequency of the various weather regimes as time evolves” 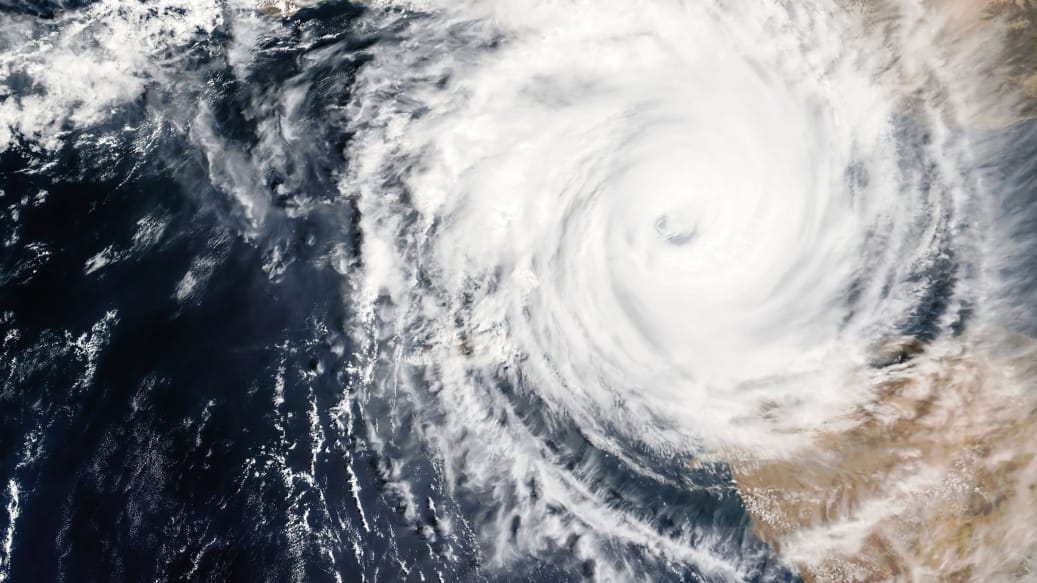 Weber et al (2017) shows that there is an association between a certain weather regime and air pollution in the Midlands of the UK. (The ‘Omega blocking pattern’ is associated with high PM10 concentration in the Midlands.) This work could be taken further, using climate prediction model output to look at the likely future occurrence of the Omega blocking pattern, and hence make forecasts of the frequency of high PM10 concentrations in the Midlands. This type of regime based climate outlook has been done for some weather phenomenon, for example in Mallet et al (2017) and Santos et al (2016).

Progress is being made on air quality forecasts, thanks in part to the improved observations available for model formulation, calibration and evaluation. Ensemble forecasts can provide some measure of the uncertainty in any forecast, with the median of a multi-model ensemble usually having less error, on average.

“when using forecast information, we need to bear in mind the limitations of the models used, and question whether unrepresented physical processes could lead to more extreme values being realised”

When using forecast information, we need to bear in mind the limitations of the models used, and question whether unrepresented physical processes could lead to more extreme values being realised.

Forecasts of extreme events on a longer decadal timescale may not be directly possible from climate prediction model output as yet, but a weather regime approach likely is possible – and may lead to better results in any case.